These past weeks have shown us that the equity markets are extremely vulnerable to headline risk, with interest rates and the trade war moving front and center. This has translated into a volatile market environment where eight of the past 13 trading days have triggered an S&P 500 Index (SPX - 2,888.68) move of plus or minus 1.00% or more.

On Wednesday last week, the 10-year minus 2-year Treasury yield spread inverted, albeit briefly, for the first time since 2007. The financial media coverage was all over this, causing more hysteria than probably warranted -- but it's a great headline. The inversion sent the market spiraling, but it only lasted intraday, with the spread closing out of negative territory by the end of the session.

While we remain at risk for an inversion, it may be a better short-term buy signal than a sell signal, according to our data. As you can see, we can get a sell-off buying opportunity, like we did in 1978 or 1998, or a knee-jerk reaction and rally like we got in 1988 or 2005. Longer term, there is plenty of reason for caution, as five-year returns after an inversion have been flat to negative after the past three signals. The real sell signal we may be looking for is when the yield curve un-inverts, as capital allocators are seeking a flight to safety.

Moreover, these signals correlate well with the other study that I did, as highlighted in this space previously -- namely, that we typically don't see a recession for 15.4 months, on average, after a yield curve inversion. This means even when the yield curve inverts, it's still premature to sell stocks.

While the risk of a recession has increased dramatically -- as I discussed a month ago, with defensive sectors outperforming and economic data starting to deteriorate -- it doesn't mean we need to have a hard landing. Recent history leads us to believe that this is the only kind of recession possible, but throughout time we've had mild recessions, particularly during secular bull markets that were spurred by technological innovation and growth.

One sector that leads me to believe we could be in this scenario, and has surprisingly stood out well during the recent volatility, is the software services sector. As a proxy, I like to look at the iShares Trust Expanded Tech-Software Sector ETF (IGV - 212.72). You would suspect that this sector would be underperforming if we were indeed headed for a much larger bear market or recession, yet it still is outperforming the broader equities market by 7.35 percentage points year-to-date. What's more, when you look at the underlying holdings, many leaders still look strong from a technical standpoint. This sector has arguably been the best-performing area of the market over the past few years, and valuations are very rich, yet investors still seem to have a bid for growth even amidst uncertain times.

I get it that the $SPX 200dayMA is popular and widely followed. That said, the 160dayMA has been pretty important since 1Q'18 in terms of support/resistance. Marked lows yesterday. pic.twitter.com/JNC8IpJxZY 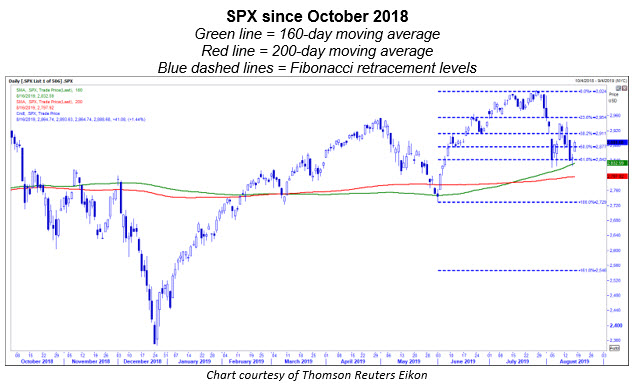 Finally, overhead resistance levels of interest for the next week are the SPX 2,945-2,955 range, which is an area of multiple gaps, and the 3,025 July 26 closing high. Support levels that we'll be watching are 2,822, which is the intraday low from Aug. 5, and short-term traders are likely using it as a level for stop-losses. Beyond that is the round 2,800 century level, which coincides with the 200-day moving average, and 2,740 -- site of the June low, and 100% retracement level from the recent high.

Last week's American Association of Individual Investors (AAII) sentiment survey saw little change, but the prior week delivered some of the most extreme readings in quite a while. It was the largest drop of bullish sentiment of the year, and the fourth-biggest since the March 2009 low. Additionally, AAII bears doubled week-over-week -- the first time that's happened since March 2004. Moreover, the bulls-minus-bears ratio fell by 26.5 points, while the bears + neutral group rose to 78.3% -- the lowest and highest readings for these metrics, respectively, since the Dec. 12, 2018 survey. 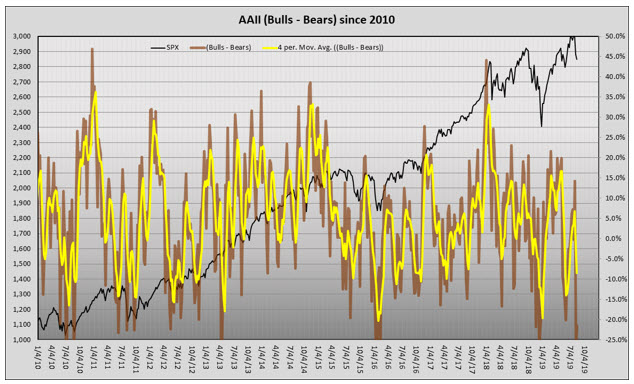 Meanwhile, the all-Options Clearing Corporation (OCC) put/call ratio 10-day moving average is nearing extreme levels, with the June highs just overhead at 1.023. As you can see, we've had a recent spike past the 1.18 level on this put/call ratio, which has marked SPX bottoms in the past. 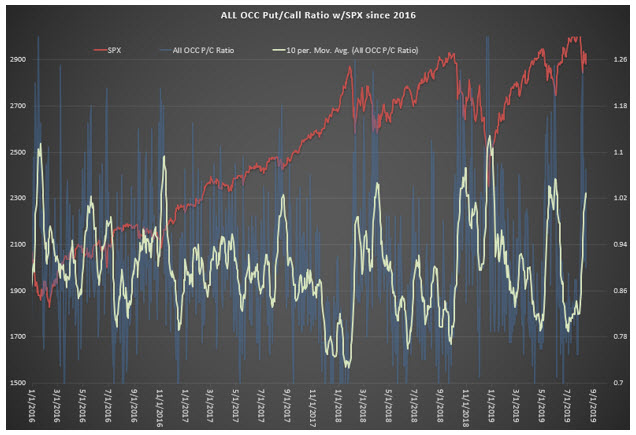 In addition, at least one breadth indicator is flashing a possible buy signal, with the percentage of SPX component stocks trading above their 50-day moving average hitting a low of 26.85%. This level is near the "extreme" threshold of 20%, and in an area where we can often see market bottoms start, at least in the short term. 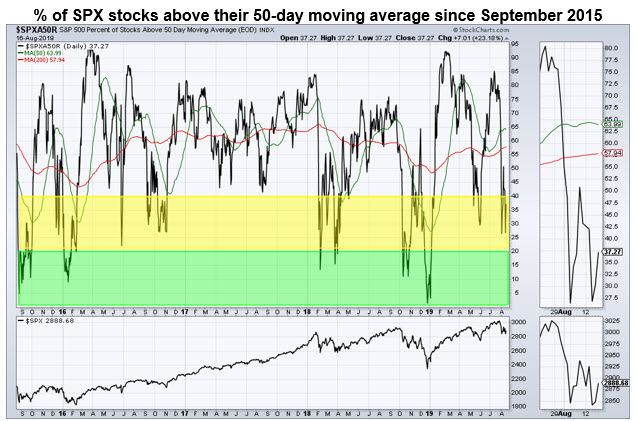 Once again, market participants' eyes will remain on the Federal Reserve this week. Traders will be scouring the release of the Federal Open Market Committee (FOMC) meeting minutes from July and Fed Chairman Jerome Powell's opening comments at the Jackson Hole symposium trying to find a glimmer of hope that they will see a much larger rate cut in September and an effort stave off a recession.

We realize markets are one headline or one tweet away from a rip or a much larger dip as they remain highly sensitive and vulnerable. But, with all of these factors -- and as we wait to hear from the Fed -- we believe there is a relatively good chance for a short-term bounce in the market.