Why Tilray Stock Continues to Struggle

In a note to investors Monday, Cowen analyst Vivien Azer wrote that Canada’s cannabis sales in 2020 would reach just $3.2 billion, nearly a third lower than her original estimate of around $4.6 billion. Some of the industry’s biggest names suffered a double whammy as U.S. stock markets dropped by more than 3% as the coronavirus (Covid-19) outbreak continues to spread across the globe.

Cronos was not included in Azer’s downgrade, but likely that’s only because the news from Cronos came too late to be included in her note. The company announced Monday morning that it would not file its fourth-quarter and full-year earnings report on time. There are few things that investors like less than late filings, especially when one of an industry’s top analysts is getting increasingly cautious about that industry’s prospects.

What’s Wrong With Cannabis in Canada

Regulating the new cannabis industry took longer than expected. Legal sales of recreational pot in Canada did not begin until the fall of 2018, even though legislation approving sales was passed almost 18 months earlier. On top of that, Canada’s federal and provincial governments have been slow in approving retail licenses for cannabis retail shops.

In Ontario, Canada’s highest population province, only about two dozen retail stores were open a full year after sales began. The provincial government has been accused of slow-walking the licensing process with its lottery system for selecting license holders. This past December, Ontario replaced the lottery with an open licensing system. That will help, but the industry has a lot of catching up to do.

Given the lack of speed in approving new licenses, cannabis producers turned to cannabis 2.0; that is, edibles and derivatives that extended the industry’s reach beyond smokable pot. Health Canada, the federal agency charged with regulating the cannabis industry, failed to move quickly enough to license derivative products like edibles, vapes, infused beverages, topicals, tinctures and concentrates. These high-margin products were not available until late last year. The sale of derivatives was expected to boost revenues and profits and to keep investors buying stock in Canada’s cannabis companies.

A third big issue facing Canadian cannabis growers is competition, both legal and illegal. There are more than a hundred companies licensed in Canada to grow and sell recreational and medical cannabis. Even if Azer is right about total sales reaching $3.5 billion this year, that’s not a lot of revenue to spread around to so many companies.

The bigger part of the problem, however, is competition from illegal growers. According to Azer, “[W]e now assume that 80 per cent of the market will remain in the illicit trade in 2020, as it seems less clear to us that heightened enforcement will materialize this year to facilitate purchase migration to the legal trade.” 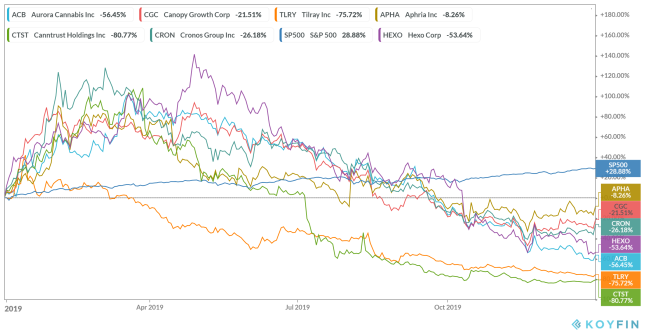 It should be no surprise, then, that short sellers are thick on the ground in the pot sector. According to research firm S3 Partners, in 2019 short sellers posted mark-to-market profits net of financing totaling more than $993 million.

Short sellers pocketed $31.3 million in profits by betting against Cronos, $41.2 million by shorting Aurora Cannabis and $21.9 million by taking a short position in Tilray.

As a percentage of the company’s float, 15.65% of Tilray stock is short, but that pales next to the 38% of Cronos shares that are held short. The downside is that borrowing shares of the most highly shorted cannabis stocks now commands a fee of around 35%.

Last year, Tilray spent about $55 million to acquire cultivator Natura and $316 million to acquire Manitoba Harvest, a maker of hemp-based edibles. The company then completed a merger with Seattle-based private equity firm Privateer Holdings in December in a deal valued at $2.9 billion.

The company’s cash picture is dim, however. Cash and equivalents dropped from around $487 million in the third quarter of 2018 to $100 million 12 months later. Long-term debt only increased by about $8 million to $428 million in the same period. The net debt to EBITDA ratio dropped from a positive 1.1 times to a negative 2.3 times.