Why An Inverted Yield Curve Is Important

An inverted yield curve happens when short-term interest rates become higher than long-term rates. For this article, I will use the 10-year Treasury note for the long-term rate and the Fed Funds rate for the short term.

The yield curve recently inverted, and market pundits are running around like their hair is on fire. Why is this getting so much financial media attention, and causing alarm among the investment cognoscenti?

One reason is that a curve inversion is an unnatural state for an economy to be in. Why would an investor buy a 10-yr bond when she could get a higher interest rate with a 30-day T-Bill? It makes no sense from a practical standpoint. Is the short-term rate too high, or is the long-term rate too low? We will address this later.

Curve inversions may be unnatural, but they happen, and it's happening now. Later in this article I'll offer some possible explanations for this upside-down interest rate environment, but first let's go through the inversion events that have happened in the past. By doing so we can gain some insight about what an inversion means to investors in stocks and bonds.

The first chart comes from JPMorgan Asset Management. It shows the yield curve and the recessions that followed. This chart shows that when the curve inverts, a recession is very likely to follow several months later. I don't know of any economists who dispute this assertion because history is history and not theory.

It's important to note that there is a significant lag between the first inversion date and the onset of the recession. The average lag time is 14 months, which means that there is no need to panic right now. There will be sufficient time to get your house in order before the next recession comes to town.

Chart 1. The history of inversions and recessions 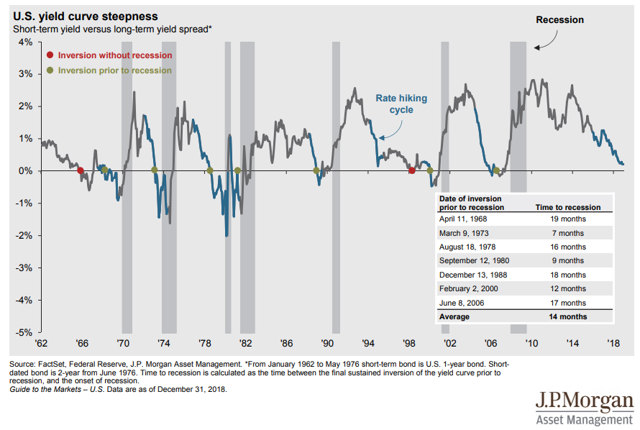 It's The Stock Market That I'm Concerned About

Now that we've established that yield curve inversions are a warning sign for oncoming recessions, and that the average lead time is 14 months, what can we do with this information? Nothing valuable if all we want to know is when the next recession is likely to arrive. I'm far more interested in finding out when the stock market is likely to top out and begin to roll over into bear territory.

To do this, let's begin with a look at each incident of inversions from the last 50 years so we can pick up some clues about what may be coming next. After that, I will show the numbers related to the link between inversions and market tops.

Chart 2. The bursting of the housing bubble and the Global Financial Crisis

The Smart Money knew in July 2006 that something was rotten in the State of Denmark. So they began offloading their big holdings in financial stocks like Lehman Brothers, Bear Stearns, and Countrywide Credit. The market didn't peak until October 2007.

Chart 3. The bursting of the Tech bubble

As the Tech bubble was getting ready to pop, the curve inverted in April 2000. The Smart Money began selling some high profile names like WorldCom, Enron, and Pets.com to retail buyers who still believed that the only thing that mattered was eyeballs and clicks. Earnings? Nah, that's so last year.

Chart 4. The aftershock from the 1987 market crash

When the stock market crashed in 1987, it seemed like the end of capitalism as we knew it. I know, because at the time I was the head trader for a hedge fund. But the market recovered quickly. It wasn't until 1990 that the economy felt the full effects of the 1987 market crash.

Principal causes of the 1980 recession included tightening monetary policy undertaken by the Federal Reserve to combat double-digit inflation and residual effects of the energy crisis.

Presidents Ford and Carter tried their best to combat runaway inflation in the 1970s by jawboning and handing out lapel buttons. But eventually the economy succumbed to inflation, and it took the substantial courage of Paul Volker to finally banish the inflation devil.

Chart 7. The rise of OPEC and inflation that followed

When the Saudis suddenly jacked up the price of oil, the world was shocked. An oil embargo followed soon after and there were gas lines around the block with people who were desperate to keep their cars running.

The Saudis did this twice, and the economy took a major hit as a result. The stock market suffered one of the worst 2-year periods in its history. Only the market crash of 1929 and the Great Depression could top this beating.

The Recession of 1969-1970 was relatively mild. It lasted for 11 months, beginning in December 1969 and ending in November 1970, following an economic slump which began in 1968 and by the end of 1969 had become serious, thus ending the second longest economic expansion in U.S. history which had begun in February 1961. Only the 1990s saw a longer period of growth.

It's informative and valuable to know when the next recession is coming if you're a business owner who has to plan ahead for expected demand for her product or service. But this article is about the link between the inversion and the stock market. We want to know how much time we have to get ready for the next bear market in stocks. 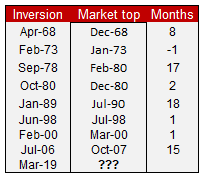 Why Do Curve Inversions Happen?

Based on my study of the behavior of investors, I believe that inversions happen when investors believe that a recession may be coming and they seek shelter in the safest investment of all - the 10-year Treasury bond.

These two forces collide to produce an inverted yield curve.

What Can Investors Do To Deal With An Oncoming Recession?

Every investor should have a Plan B that addresses adverse market conditions and especially adverse economic conditions. It's comforting to know that there is an 8-month average lead time between an inversion and a market top, but there is really no time to waste.

When you have a Plan B in place, it's just a matter of following your own rules and reducing your portfolio risk in stages, according to the indicators that you follow.