Where Will Aphria Be in 1 Year?

Investors have long known Canadian marijuana producers Aurora Cannabis (NYSE: ACB) and Canopy Growth (NYSE: CGC) as among the leading names in their industry, given their rapid expansion after Canada legalized recreational cannabis in October 2018. However, last year was pretty rough for both companies, bringing a series of headwinds that made it impossible for them to achieve profitability.

Regulatory delays slowed the openings of new legal cannabis stores through which they could sell their products. Unregulated sellers from an expanding black market also took a toll on the companies' revenues. And both companies' problems were exacerbated by the consequences of their rash, haphazard, and expensive efforts to expand too fast, too soon.

By contrast, cannabis producer Aphria (NASDAQ: APHA) has been taking advantage of current conditions to establish its name in the space with an asset-light approach. Selling products under the Aphria, Broken Coast, and Solei brands, it is the only Canadian pot company to have reported five consecutive quarters of positive EBITDA. Let's examine how Aphria could look one year from now.

Beyond high revenue growth, what more can it do?

Aphria already has an upper hand when it comes to revenue in the cannabis industry. Its focus on its roots has made its revenue soar this year. Considering its market cap of $1.6 billion -- less than a quarter of Canopy's $6.6 billion -- Aphria's revenue numbers are quite commendable. In its fiscal 2020, which ended May 31, its revenue grew 129% to $543.3 million Canadian dollars, while Canopy's revenue grew by 76% to CA$399 million for the same period.

When it delivered its fiscal Q4 numbers in late July, Aphria reported adjusted EBITDA of CA$8.6 million, up by a stunning 49% from Q3. But selling, general, and administrative (SG&A) expenses more than doubled sequentially, to CA$116.6 million, which pushed the company's Q4 net loss to $98.8 million. This was largely due to operational changes it made in response to the COVID-19 pandemic, resulting in a $64 million non-cash impairment charge, as well as some non-operating losses generated by declines in the values of some of its investments. However, I wouldn't fret about this one-time coronavirus-related charge.

The company's medical cannabis business has gained footholds across Canada, Europe, Africa, South America, and Oceania. Its Germany-based subsidiary, CC Pharma, brought in 98% of total distribution revenue in Q4; 2% came from other distribution companies. Of the quarter's net revenue of CA$152 million, CA$65.5 million came from cannabis products and CA$99.1 million from distribution revenue (minus CA$12.4 million in excise taxes). The medical business contributed 13% of the total revenue of in Q4; recreational cannabis provided the rest.

Aphria can be expected to benefit from the newer market for cannabis derivatives -- products such as vapes, edibles, concentrates, and pot-infused beverages and chocolates, which became legal for sale in Canada in October 2019 under its "Cannabis 2.0" regulations.

Its cannabis vape products are doing well, according to the Q4 report. I would be eager to see what more it can do with derivatives, given that Canopy Growth launched a wide range of vapes, cannabis-infused chocolates, and beverages in May. Given this competition and more, Aphria should plan to launch more varieties of derivative products soon.

What should be the focus?

Aphria earned a big chunk of its distribution revenue from its German subsidiary, and that dependence on CC Pharma could prove detrimental in the longer run. Management should continue to focus on the company's core operations and bringing in more sales from its home country. That said, diversification is also not a bad idea as more countries legalize cannabis. A key market for Aphria could be the U.S., where states continue to loosen restrictions: New Jersey, Mississippi, South Dakota, Arizona, and Montana all have legalization proposals of various types on their ballots next month.

Aphria also hasn't made any compelling partnership deals with any alcohol or beverage companies in the U.S. Meanwhile, Canopy Growth is partnered with beverage maker Constellation Brands, HEXO has linked up with Colorado-based Molson Coors Beverage Company, and Cronos Group has a deal with tobacco maker Altria Group. These strategic deals could be beneficial for these companies once the U.S. federally legalizes marijuana. What worries me is that Aphria might lose out on these opportunities.

Still, the future is bright for Aphria

A profitable company's strength lies in its leadership team -- and Aphria has proved that point. Since Irwin Simon took the reins as CEO in 2019, Aphria has been flourishing. (Prior to that, Simon was the independent chair of its board of directors.) His leadership skills are evident from the successes of packaged goods company Hain Celestial Group, which he founded and led as CEO for 25 years. Hain Celestial recorded $2.3 billion in revenue for its fiscal 2019.

Besides Canada, Aphria also has operations in Germany, Italy, Malta, Colombia, and Argentina. With consistent positive EBITDA and good cash on hand, the company has an opportunity to be a leading player in the derivatives market, which would give it room to flourish even more in the coming years. It had CA$497.2 million of cash and cash equivalents on its books at the end of its fiscal Q4.

So far this year, Aphria's stock has generally outperformed its peers. It's up by 10%, while the industry benchmark Horizons Marijuana Life Sciences ETF is down by 27%. Meanwhile, Canopy and Aurora have sunk 14% and 80%, respectively, over the same period. 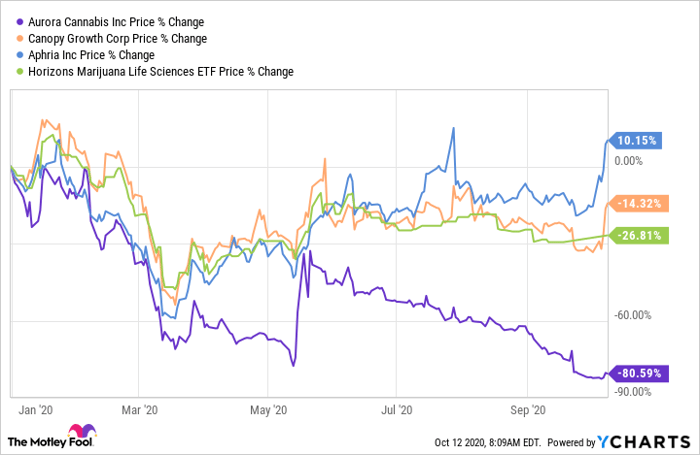 Aphria will report its fiscal first-quarter 2021 results on Thursday, at which point investors should get a clearer picture of its growth strategies. But with a strong leadership team, consistent EBITDA, and staggering revenue growth, this is one of the best marijuana stock picks for new and seasoned investors.