When to Buy the Dip in Disney Stock

Shares of Disney were selling off on Wednesday, and deservedly so as the company reported worse-than-expected earnings.

While the future still looks quite bright for the House of Mouse, the quarter wasn't in line with expectations.

Disney reported fiscal third-quarter earnings of $1.35 a share, badly missing expectations of $1.72 a share as its acquisition of Twenty-First Century Fox shaved off 60 cents a share in profit. Revenue surged 33% year over year but the tally of $20.245 fell short of estimates by more than $1 billion as analysts were looking for $21.4 billion.

Guidance wasn't too robust either as Disney is pouring funds into its direct-to-consumer streaming packages to compete head-to-head with Netflix. While this should help propel Disney into the future of entertainment consumption, it's weighing on the stock price Wednesday.

Given the short-term pessimism and the long-term optimism, many investors want to buy Disney stock. The question is: Where should they pull the trigger? 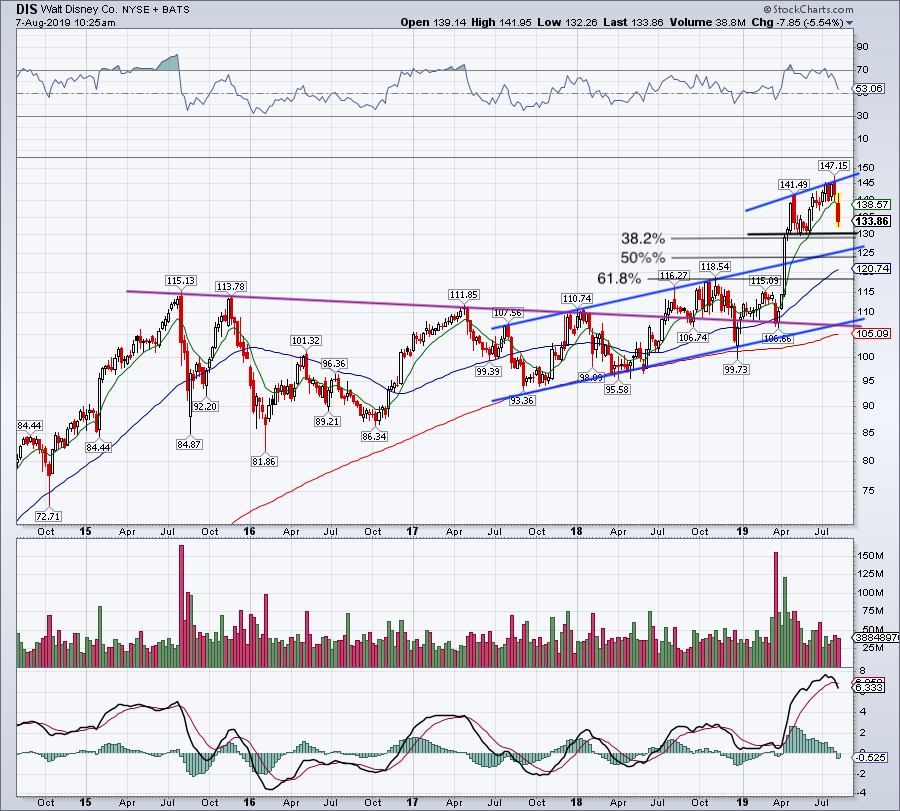 Above is a long-term weekly chart of Disney stock, which shows years' worth of consolidation before the stock's massive rally in April. A pullback now should come as little surprise, given that Disney went from $110 to $147 in just a few months. In fact, one could argue that the decline is rather modest given the poor headline numbers of the report.

Now knifing below the 10-week moving average, bulls must take some caution. The $130 level has proven notable after the big rally, while the 38.2% retracement for the one-year range sits at $129.27. Aggressive dip-buyers can look to initiate a long position in this area.

If the stock holds, look to see if Disney can reclaim the 10-week moving average or if the 10-week instead acts as resistance. That could be a strong tell as to what the next few weeks and months will look like for the stock. Above the 10-week is good. Below, not so much.

If the $129 to $130 area doesn't hold as support, look for the $121 to $125 area to buoy the name. Here Disney stock has the backside of prior channel resistance (blue line), the 50-week moving average and the 50% retracement. This is where conservative dip-buyers may consider initiating a position.

There is one unlikely but possible scenario for ultra-conservative buyers: a full-blown correction.

If the markets really go into a frenzy later this year -- be it on trade worries, bond yields, currency concerns, you name it -- we could see a must-buy opportunity in Disney stock. I would consider that a decline into the $105 to $110 area.

Here it will meet short-term channel support (blue line), as well as the 200-week moving average. Further, it will also have the backside of prior multi-year downtrend resistance (purple line).

Keep in mind, these moving averages and trend lines are constantly fluctuating. But it never hurts to have some "special buy prices" in mind just in case we get a huge decline in the overall market. For me, that's Disney stock on a roughly 25% decline from the current highs, into a confluence of significant support.