What Stock Streaks Have To Do With Relative Strength

Here's some research I did based off a completely random thought. Out of nowhere, I began wondering if consecutive positive days for a stock indicated some pent-up buying pressure that would lead to some positive medium-term returns. Then I thought about stocks on a winning streak pulled down by general stock selling, which led me to another thought: instead of simply looking at consecutive up days, what about consecutive days where the stock was positive on a relative basis? In other words, stocks with consecutive days beating the S&P 500 Index (SPX). Perhaps this was a better way of finding some pent-up buying pressure.

Like I said, it was a random thought, but I think the results are interesting enough to share.

For this study, I went back to 2010 and I summarized stocks' one-month returns going forward, based on the number of positive days in a row the stock had. I grouped the returns once the number of days got to 10 or more. Then I did the same thing for stocks based on the number of consecutive relative strength days. That is, days where the stock outperformed the S&P 500. Therefore, if the stock lost 0.50% but the S&P 500 lost 1.00%, that was considered a relative up day. If the stock gained 0.50% but the S&P 500 gained more than that, it was considered a down relative strength day, ending whatever streak it had going. Again, I was wondering if long streaks of bullish action signaled pent-up buying leading to medium-term gains.

In my opinion, the best way to evaluate an indicator when looking at individual stock returns like this is to look at the percentage of time the stock beats the general market after a signal. If you merely look at the stock return data, like average return, then the data can get skewed if signals are bunched around a certain date.

There's not much of a difference in the two lines through the first six trading days. The two lines suddenly diverge right around day seven. At that point, the stocks with a streak of days beating the S&P 500 suddenly become more bullish, based on this method. The stocks simply moving higher that many days in a row fall significantly from days six through nine. 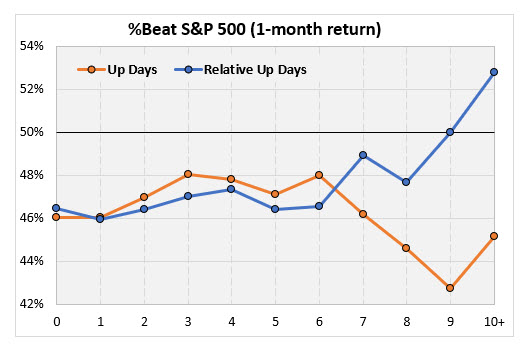 For example, as of Tuesday, July 9, Yelp (YELP) stock had been up nine days in a row. Based on the chart above, this could have bearish implications for the stock over the next month. Since 2010, stocks in this situation beat the general market over the next month only about 43% of the time.

Fleetcor Technologies (FLT) stock, on the other hand, had a down day on Monday, July 8. It has, however, beat the S&P 500 12 days in a row. Based on the chart above, stocks in this situation beat the S&P 500 over the next month about 53% of the time. It seems that simply looking at consecutive up days, the indicator is a predictor of mean reversion. Looking at positive relative strength days, though, it's an indication of positive buying momentum. 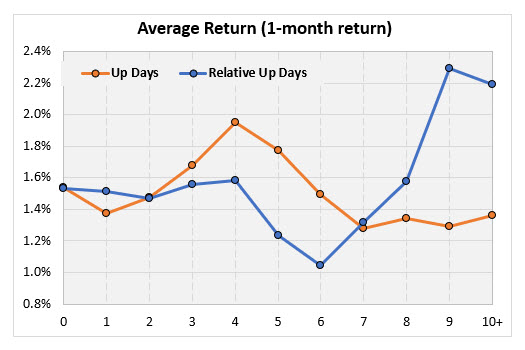 Here are similar charts as above, but instead of looking at the consecutive bullish days, it looks at consecutive bearish days. The data seems to show the higher the streak of down days, the worse the stock underperforms. For this group, the percentage chance of beating the S&P 500 over the next month steadily moves lower and bottoms at eight straight days. After nine or 10+ days, it moves back to a normal range (this volatility at the end may be due to fewer signals, as there are about 100 data points at days nine and 10 each). The number of negative relative strength days (days where the stock underperformed the S&P 500) has very little affect on the stock returns going forward. 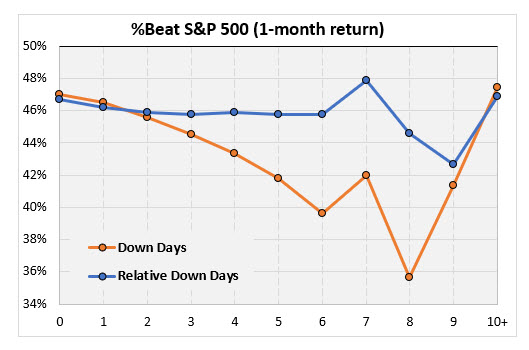 Finally, here's the average one-month return for stocks given the number of consecutive losses. Again, it seems simply looking at the number of down days in a row can find stocks that tend to underperform.

Looking at the number of days with negative relative strength doesn't seem to show much of anything until you get a spike at 10+ days. Again, the sudden spike at the end seems like randomness to me, but maybe there's somewhat of a tendency to revert to the mean after so many days of losing to the general market.