Despite a difficult operating environment, Wells Fargo (WFC) generated positive Q4 results. The asset cap has become a major hinderance to growth while interest rates are abnormally low. My investment thesis remains bullish on the long-term story as the new management team builds the business back while already generating billions in quarterly profits.

Wells Fargo technically reported a Q4 where revenues dipped so much the market should normally view this as a bad result. In reality, due to abnormally low rates and an asset cap, the large banks are placed in a box for now. Despite these headwinds, the company still reported a non-GAAP EPS of $0.70 for net income of $3.0 billion.

In general, the numbers were ugly with a $1.9 billion hit to NII while noninterest expenses only dipped $0.8 billion from last year. The company saw net charge-offs dip from prior periods leading to an actual reduction in the provision for credit losses after taking massive provisions in the 1H of the year. 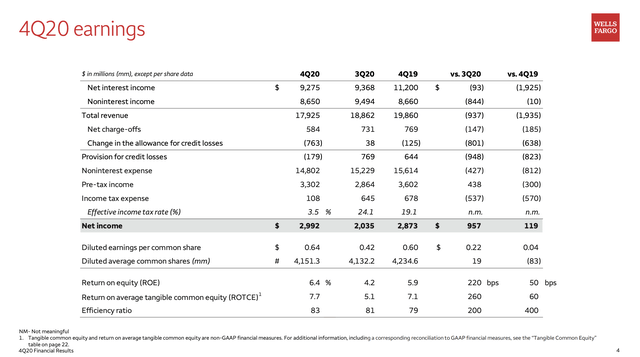 The large banks haven't seen any of the major credit losses expected when COVID-19 shut down the economy back in the spring. Wells Fargo still has $19.7 billion in the allowance for credit losses account while only charging off $584 million in Q4.

The quarter was further messy due to an efficiency ratio surging to 83%. Wells Fargo hasn't been able to restructure due to the virus impacts on the business causing timing issues.

The large bank forecasts organizational structure optimization and branch rationalization along with other efficiency programs ultimately cutting out up to $10 billion in costs. Wells Fargo suggests management already has identified in excess of $8 billion off those cost cuts.

The company forecasts a 2021 expense target of $53 billion in an environment where revenues are virtually flat due to the tough rate environment and asset caps. Part of the $3.7 billion in expected net expense reductions for the year will go into $1.6 billion in investments. 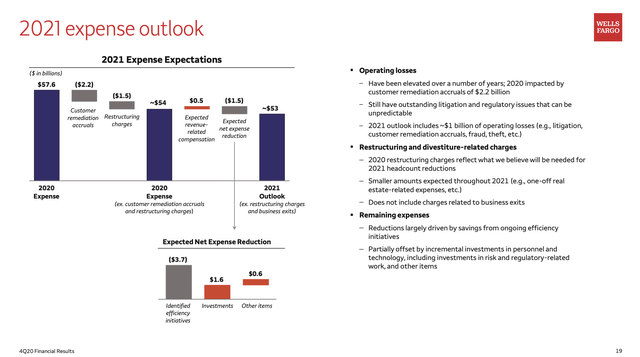 The real payoff in 2021 will be in rising interest rates leading to higher revenues while the expense base is further cut or held in place as revenues rise. Even at a 2019 revenue base of $85 billion, the target for an expense base of $53 billion still leads to an efficiency ratio over 62%.

Wells Fargo will still have a long path higher even behind the expense structure set for 2021 with an improved revenue base in 2022 and beyond.

Wells Fargo ended 2020 with a tangible common equity value of ~$33 per share. The large bank forecasts a Q4 pro-forma ROTCE of 10% with a goal of reaching 15% in the future. 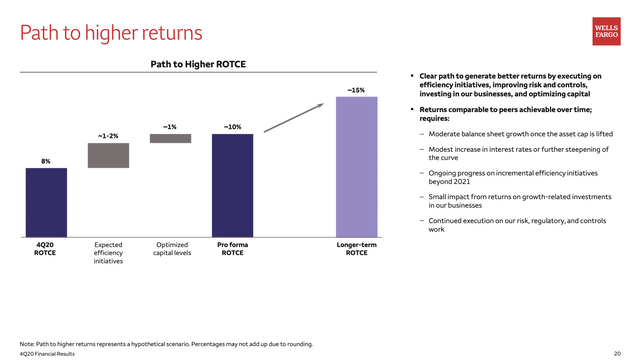 At a TBV of $33, the company is forecasting an EPS potential of ~$5. As stock buybacks return to cutting the 4.1 billion share count by 10% annually, the TBV will jump boosted by both net income and a reduction in the share count.

The stock is currently trading at just above $30 and the earnings potential has already been identified as at least $5+ once the asset cap is removed and the efficiency ratio is pushed in the mid-50% range. Wells Fargo is down up to 6% in initial trading as the market was expected better guidance for 2021. Unfortunately, the large bank can't really boost revenues with the current rates and the asset cap while improving efficiencies will take at least 2-3 years.

The key investor takeaway is that the current dip in the stock provides another buying opportunity for those that failed to buy the stock in the $20s most of last year. Wells Fargo remains a long-term efficiency story that will take 2-3 years to play out while the bank will boost earnings above the $4 per share level in 2019. Investors should use weakness to own the stock.