Market volatility is up in recent sessions, and END_OF_DOCUMENT_TOKEN_TO_BE_REPLACED

As tech takes a tumble this week, there END_OF_DOCUMENT_TOKEN_TO_BE_REPLACED

Warren Buffett’s Berkshire Hathaway reported earnings on Saturday and Wall Street is caught up on one key thing: its cash pile.

In the third quarter, the holding company’s cash balance grew to a record $128.2 billion — up from $122.4 billion in the prior quarter and $23 billion a decade ago — leading analysts to wonder why the company isn’t spending.

Berkshire’s last entire company acquisition was Precision Castparts in 2015 and the company hasn’t meaningfully accelerated its buyback program, which have both contributed to the ballooning cash balance. 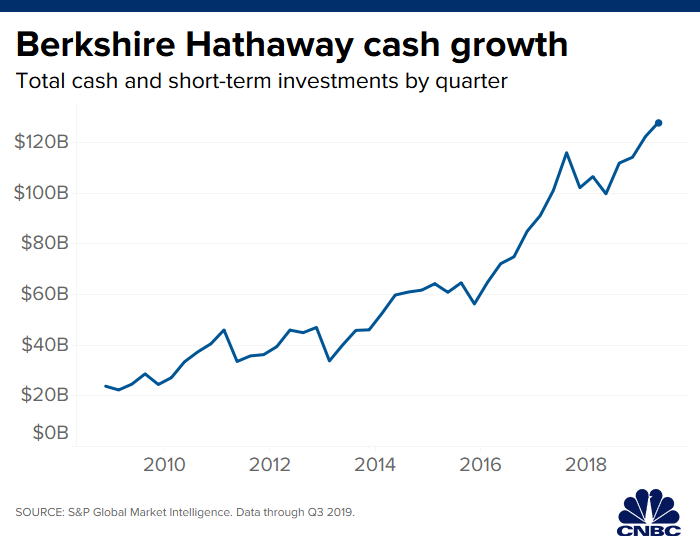 The company reported earnings of $3.07 a share, which topped the Street consensus of $2.84, according to estimates from Refinitiv. Revenue also exceeded expectations, and Berkshire said it repurchased $700 million worth of stock in the quarter.

With no clear signs for why Berkshire is accumulating cash, a number of analysts wondered why the company isn’t buying back more stock. This is especially true since the shares are up just 7% this year and on pace for their worst year in a decade.

By comparison, the broader market has been on a tear. The Dow Jones Industrial Average and S&P 500 surged to record highs on Monday, bringing their total gains for the year to 18% and 23%, respectively.

Morgan Stanley said that the share repurchase program pales in comparison to the company’s cash balance, and that investors “may be dismayed by minimal share repurchases in the quarter.”

Analysts at UBS echoed this concern, saying the buyback remains modest and that they were surprised that “the company has not been more aggressive with share repurchase” given “the discount to intrinsic value BRK’s shares are currently trading at and its substantial excess cash balance.”

Morgan Stanley has an equal weight rating and $217 target on the stock. UBS has a buy rating and $242 12-month target.

Buffett has traditionally not been in favor of buying back a lot of Berkshire Hathaway’s stock, although in 2018 he did make future buybacks easier by eliminating a restriction. 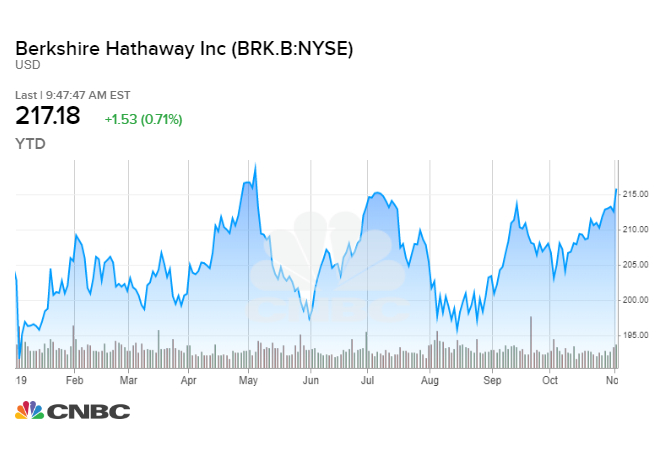 “It is challenging to estimate Berkshire’s pace of potential future share buybacks, which we now believe could be at a modest level going forward. We still view a shareholder dividend as unlikely for now,” Barclays analyst Jay Gelb said. “Berkshire now has over $100 bn of immediately deployable cash for accretive acquisitions to supplement organic growth as well as for investments and share buybacks,” he added. Barclays has a neutral rating on the stock.

While Buffett hasn’t been buying entire companies lately, he has been buying stocks. As of the latest round of SEC filings, Berkshire’s top holdings by value are Apple, Bank of America, Coca-Cola, Wells Fargo, American Express and Kraft Heinz.

“In recent years, the sensible course for us to follow has been clear: Many stocks have offered far more for our money than we could obtain by purchasing businesses in their entirety ... Charlie and I believe the companies in which we invested offered excellent value, far exceeding that available in takeover transactions,” he wrote in his 2018 annual report.

Earlier this year, Berkshire announced a $10 billion investment in Occidental Petroleum for the Anadarko takeover, and in 2017 the firm acquired nearly 40% of truck stop operator Pilot Flying J.

Buffett turns 90 next year, but so far the widely followed investor has shown no signs of slowing down amid speculation over who will succeed him.

“Warren Buffett ... intends to remain at the helm for the foreseeable future, and his succession plan is in place,” Gelb said.