Escalated geopolitical tensions swooped in and spoiled the market’s party in the new year, and Wall Street analysts warned the sell-off might be just beginning.

After a historic run in 2019 and a strong first day of 2020, the S&P 500 fell after a U.S. airstrike in Iraq killed Iranian Gen. Qasem Soleimani on Friday, spiking oil prices. Stocks had a weak start to Monday’s session before notching slight gains as the crude spike eased.

Such geopolitical shocks have historically led to sharp pullbacks in stocks with the S&P 500 declining 6% to 7% on average in the wake of the events, according to Savita Subramanian, head of U.S. equity and quantitative strategy at Bank of America Merrill Lynch. Subramanian researched past shocks such as Brexit and Argentina’s debt collapse.

She believes the pullback this time will be in line with the historical average before recovering later this year.

Spikes in oil prices “due to geopolitical tensions can be negative given risks of stagflation, plus the impact on corporate and consumer sentiment/spending,” Subramanian said in a note Monday. 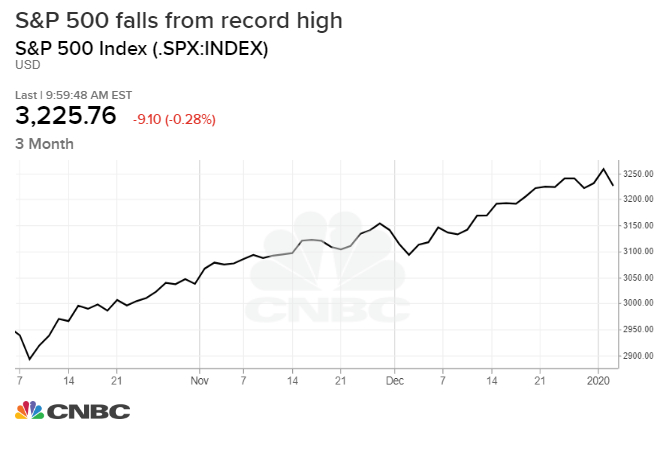 Some on Wall Street see a deeper sell-off on the horizon, perhaps as much as a 10% correction. Stocks had gone too high, too fast in the year-end 2019 rally, creating an overbought environment that’s vulnerable to a deeper pullback, they said.

The relative strength index for the S&P 500 jumped to above 78 on Dec. 26, the highest level since January 2018, with a number above 70 seen as a sign stocks are becoming overbought, according to FactSet. The gauge was at about 59 on Monday.

“The extreme overbought condition and excessive optimism set up an environment that was ripe for a tactical correction, and the developing Iranian conflict may act as a catalyst for one,” Tony Dwyer, chief market strategist at Canaccord Genuity, said in a note Monday. A correction signals a 10% decline from the 52-week high.

What To Buy Now?

“Don’t reach for high beta or too much cyclicality,” Mike Wilson, the bank’s head of U.S. equity strategy, said in a note Monday. “Continue to be choosy on growth stocks with quality earnings and cash flows that aren’t egregiously overvalued... In the near term as markets potentially correct, defensive stocks should have a good run/catch-up as US rates fall on geopolitical concerns and growth doubts.”

The S&P 500 materials sector, a cyclical group, led the market decline in the new year, down 3% so far. Dow transports slid more than 1% on Monday. Consumer stocks also fell over last two days, with Target and Under Armour both losing more than 3%.

“I took some profits today on my hedges. I have some trades in that’s going to make me more short if we go below those levels,” Iuorio said Monday on CNBC’s “Worldwide Exchange.”

Iuorio said gold is a buy right now, expecting the precious metal to trade up to $1,700 an ounce. Gold futures hit $1,590.90 per ounce, their highest level in more than six years.

To be sure, while seeing a deeper sell-off ahead, analysts are not forecasting a bear market or an economic recession as stocks typically bounce back from losses triggered by geopolitical events.