Wall Street and ‘Mom and Pop’ Are Both Getting It Wrong

Making money in the markets doesn't have to be difficult.

In fact, there's a simple way to do it consistently: Figure out where expectations are wrong – or even just exaggerated – and make the opposite bet.

This is the crux of contrarian investing. And when you apply it to the overall market today, it sets up a huge money-making opportunity.

You see, Wall Street and Main Street are both negative on stocks today. They both expect the worst.

However, don't view that as a bad thing. If reality turns out to be just a little better than those expectations, stock prices can move much higher. And that's exactly what I expect to happen.

Let me show you what I mean...

Another earnings season, another set of gloomy predictions... and another chance to beat the market.

As we head into the third-quarter reporting season, Wall Street analysts are expecting S&P 500 Index earnings to fall 4.6%. That's much worse than early July, when those same analysts were anticipating only a 0.6% decline.

This pessimism isn't limited to just earnings, though.

Bank of America's monthly Fund Manager Survey polls 230 panelists who manage roughly $620 billion worth of assets. The survey shows that money managers are cautious on the stock market and the macroeconomic environment. The major concerns are the U.S.-China trade standoff and Brexit.

Another stat from the same report is also telling. It shows the extent of the negative sentiment from professional investors...

According to the survey, fund manager cash allocations rose from 4.7% to 5%. That is an extremely high level of cash. Many mutual funds have charters that don't allow cash levels to rise above the 5% threshold for an extended period of time.

In other words, those money managers are as "out of the market" as they can get.

I look at the cash holdings from a contrarian perspective. Whenever I see that they're this high, I usually view it as a "buy the market" signal. It tells me that, at some point, all that money needs to go back into the market in search of returns.

Meanwhile, over on Main Street, mom-and-pop investors aren't any keener. According to the American Association of Individual Investors ("AAII"), optimism recently fell to its lowest level in three and a half years. Pessimism was "unusually" high as well. Take a look... 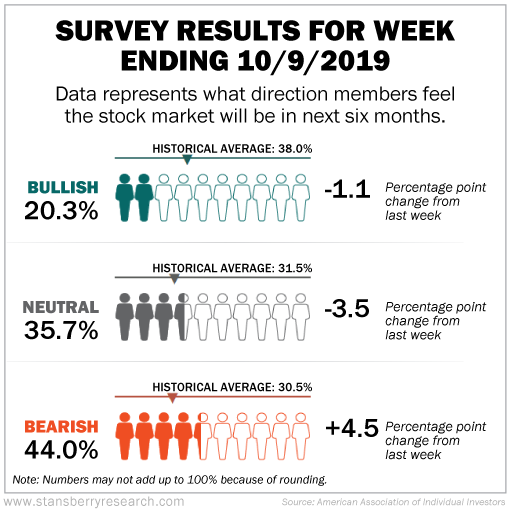 Wall Street and Main Street are both hugely bearish. And now, it's showing up in fund flows.

Simply put, folks are scared. And they're showing it with their investment dollars.

It's not surprising. Economic data continue to point toward slowing growth. Also, the headlines around trade talks between China and the U.S. have remained cautious.

But all this fear typically means one thing – investors are underexposed to stocks. While some see this as a sign that conditions are worsening, to me, it means the opposite.

It tells me many investors aren't well positioned for a market move higher. And that's good news for anyone who is invested right now.

If earnings turn out to be not as bad as feared, or if either the trade war or Brexit are resolved, that negativity will turn around – real fast. And all that money sitting on the sidelines will have no choice but to pour back into stocks.

You want to own stocks before that happens. And it's why you need to be invested now.