One of the most important mantras in the investing world is that price matters. The Canadian cannabis sector best reflects this situation with unheralded Village Farms International (VFF) rallying to yearly highs while other sector stocks are collapsing. The company was originally an afterthought in the cannabis sector, but management has made timely investments in the growth areas while others have been forced to pull back.

Just on November 2, Village Farms closed on the deal for the full acquisition of Pure Sunfarms after previously increasing their ownership position to 58.7%. The JV has spent the last year moving into branded and Cannabis 2.0 products to shift away from the wholesale flower market. For Q3, wholesale flower sales were down to only 47.0% of revenues with 2.0 products now capturing 4.5% of cannabis-related revenues.

Pure Sunfarms saw cannabis revenues rebound to $17.0 million, up from only $9.4 million in the prior quarter. Despite the low 35% gross margins last quarter, the JV still generated a 25% adjusted EBITDA margin. Unlike other Canadian cannabis businesses, Pure Sunfarms has always been very profitable.

The company is using a rock-solid foundation in the produce business to build a vertically-integrated cannabis business versus competitors that built massive operations looking for sales. The other companies have needed to cut operations after years of burning cash while Village Farms remains profitable and continues to expand.

While the company appeared no more than a greenhouse operator in the beginning, the stock has outperformed the sector in the last year. Only Canopy Growth (OTC:CGC) has produced bigger stock gains with Aurora Cannabis (OTC:ACB), HEXO (OTC:HEXO), and OrganiGram (OTC:OGI) all watching their stocks collapse. 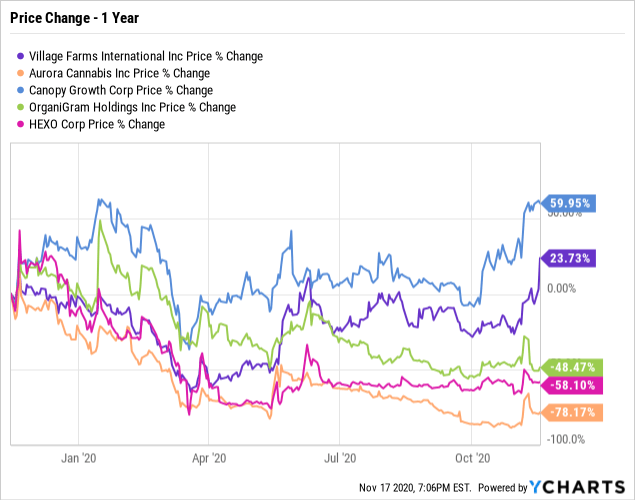 Village Farms is only valued at around $500 million now while the other companies were worth in the billions at points in the past. The stock wasn't even worth $200 million at the lows during the stock market crash due to COVID-19.

With full ownership of Pure Sunfarms moving towards value-added products, Village Farms will finally get a valuation based more on the cannabis business potential. Even, in Q3, produce sales swamped cannabis sales with $43 million. In total, the company is now a $60 million quarterly sales business on a pro-forma basis with $17 million from cannabis. Village Farms only recently rolled out Cannabis 2.0 products via vape pens and oils so more upside potential exists from these higher margin products.

The stock surged 24% on Tuesday following quarterly earnings for a new 52-week high. The market was impressed with the results, but the move was delayed by a couple of trading days.

Part of the attractiveness of the stock story is that Village Farms appears a smarter operator in the commodity business of growing cannabis flowers. The company cut back production at the Delta 3 facility in the prior quarter and only recently went back to full production. Other operators produced at full capacity until the companies had to write down inventory to finally cut production and close some facilities with no signs of ever reopening those greenhouses.

Village Farms saw cannabis inventories drop 6% during Q3 which is almost unheard of in an industry that overproduced for the last couple of years. With the company ramping back up production at the Delta 3 facility, Village Farms sees solid growth opportunities in Q4 and into 2021.

Over half of the square footage is in the U.S. setting up the company for the ability to convert operations to cannabis via a cultivation license when the opportunity eventually presents itself with federal legalization. The company is nicely positioned in Texas where recreational and medical cannabis aren't legal yet leaving Village Farms on equal footing with other operators once legalization occurs. 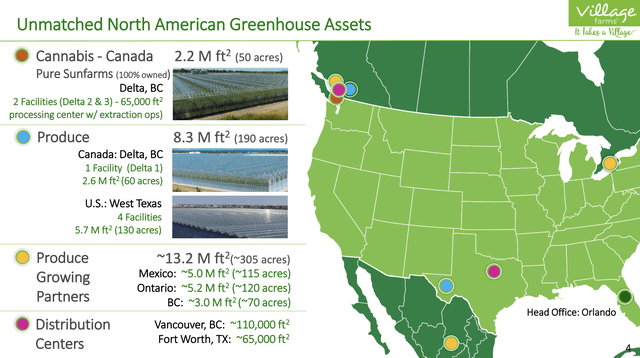 The key investor takeaway is that Village Farms is a cheap stock based on a $500 million valuation. Using a 2021 cannabis revenue estimate of $150 million, the stock only trades at 3x cannabis revenues with a minimal $50 million assigned to the produce business. Investors can probably easily make the case that both businesses are more valuable, especially with the eventual possibility of converting existing produce greenhouses into growing cannabis.