TSLA Closer to $4,000 Stock: 3 Reasons to Think Like a Tesla Investor

If you want to make money in the stock market, you need to think like a Tesla investor.

You see, looking at the history of car companies, you’d think that a person would have to be out of their mind to run one.

In fact, Wikipedia has compiled a list of defunct U.S. auto manufacturers. I didn’t count exactly how many are on the list, but my guess is there are more than 1,000.

These are all companies that failed to make it, almost all within the past 150 years.

But here’s one that isn’t going to make that list: Tesla.

Ever since Tesla released its first car, the 2008 Roadster, people have been dying to mark it off as a failure.

But Tesla can’t be stopped.

In fact, the company is on track to meet Paul Mampilly’s prediction that TSLA is going to be a $4,000 stock.

That’s big news for investors in the stock. So today, I’ll tell you how to make big money in stocks by thinking like a Tesla investor.

There are three big reasons why Tesla will become the future of transportation and make investors rich in the process.

A lot of people love to hate Elon Musk for making bold predictions.

But at Bold Profits, that’s what we’re all about!

And although Musk has a somewhat spotty history of delivering promises on time, it’s impossible to argue that Tesla hasn’t become one of the most breakthrough companies in our lifetime.

First, when you consider the magnitude of disrupting the auto industry, Tesla’s done it in a relatively short period of time.

Then, in 2017, the company released its first mass-produced car, the Model 3. That production got ramped up significantly in 2018. And from last January through September 2019, Tesla had already sold over 250,000.

It’s become by far the most popular electric car in the United States, making up about 41% of total sales of all electric vehicles.

And keep in mind, this has all been accomplished through only two “Gigafactories,” which are Tesla’s production facilities.

Five years ago, these Gigafactories didn’t even exist. And now, Tesla recently began making cars in a third facility in China and is building a fourth Gigafactory in Germany, which means the company will have easier access to sell its cars all over the world.

NO. 2: ELECTRIC CARS ARE CHEAPER TO MAKE

One of the biggest advantages that Tesla has over its competition is that it’s a pure-play electric vehicle maker.

All of its manufacturing sites, tools and components are geared toward one thing: creating electric cars.

Meanwhile, competitors such as Ford and General Motors are scrambling to get into this business. This means they have to completely restructure their businesses. That takes a lot of time and money, and since most auto companies were late to start, they’ve fallen behind by years and billions of dollars.

Since cars were first mass-produced, they’ve run on internal combustion engines. The drivetrains of these cars have over 2,000 moving parts. And anyone who’s driven for any length of time can attest that it doesn’t take much for things to break down.

In fact, the top 10 most common car repairs are all related to the drivetrain, and they’re not cheap: 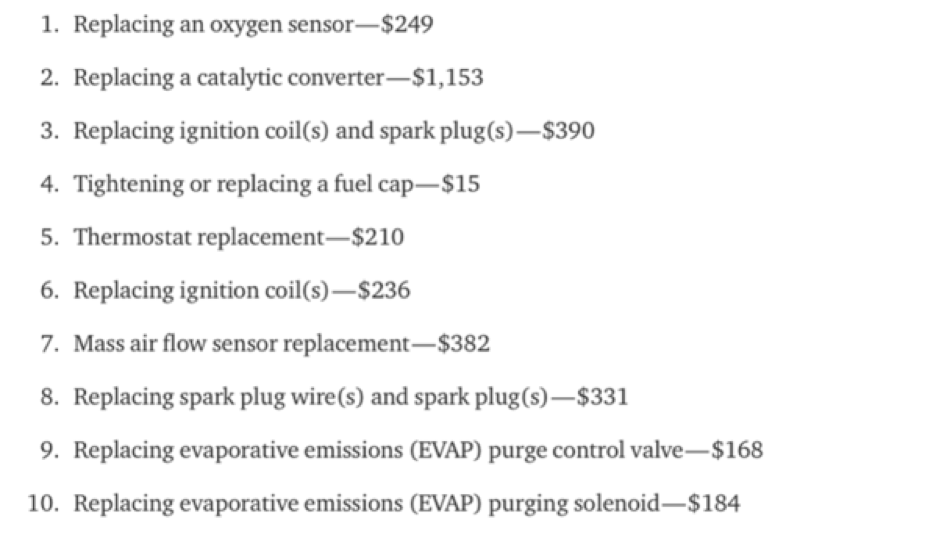 On the other hand, electric vehicles have about 20 moving parts in their drivetrains. This means there’s a lot less that can become damaged or dysfunctional, and a lot less money involved in the process of making the cars.

Over the past year, Tesla has achieved a higher gross margin than some of the biggest car companies in the world. 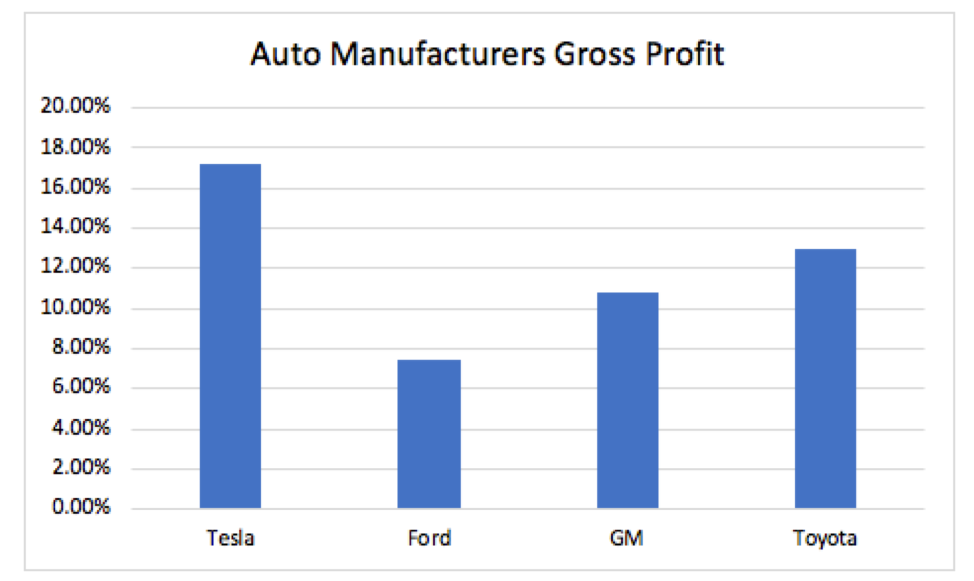 Gross margin is the best statistic to look at when you want to see if a company is properly scaling its business. For example, if you sell something for $20 that costs you $19 to make, you only have $1 left over, and that means your gross margin is 5%.

As companies begin to mass-produce larger numbers of items, the cost to make each item will usually drop. This is exactly the case for Tesla, and the company still has a long way to go.

So, as Tesla keeps ramping up production, it’ll become even more profitable and extend its lead over the competition.

NO 3: NO SHORTAGE OF INVESTORS

On paper, you can make a strong case that any car company will go out of business. As I mentioned earlier, there are a lot of expenses associated with manufacturing cars. If you bet against every car company that’s existed, you’d be rich.

But Tesla is different, and that’s clear by the patience and persistence of its investors.

Back in 2017, Tesla did the unthinkable and asked investors to buy bonds in the company. Bonds are another word for debt, meaning Tesla was planning on adding debt to the company.

If you’d listened to Wall Street, this was a horrible idea and a sure sign of bankruptcy. After all, who would want to invest in Tesla’s debt?

However, Tesla ended up selling all its anticipated debt ($1.5 billion), plus an additional $300 million. Clearly, investors had a lot more trust in the company than was being portrayed on TV.

Then, this past May, the company did it again. Tesla had planned on selling another $1.35 billion in bonds. But investor demand was extremely strong once again, and it ended up increasing that to $1.6 billion.

Bankruptcy is a plague that’s killed just about ever car company that’s ever existed.

Yet, Tesla is beating the odds time and time again. It continues to prove the media wrong, as it’s not only surviving, but winning handily in the electric vehicle race.

Tesla is the best example of new-world companies disrupting the old, creating what Paul calls “America 2.0.”

When this disruption happens to any stock, it doesn’t follow a straight line to the top. There will be ups and downs. Which is why it requires strong hands.

If you hold your own, you stand to reap the rewards. Just think about it. A small investment in Tesla could explode higher once Tesla’s stock hits $4,000.

And that’s exactly what Paul and I predict for the company.