Market volatility is up in recent sessions, and END_OF_DOCUMENT_TOKEN_TO_BE_REPLACED

As tech takes a tumble this week, there END_OF_DOCUMENT_TOKEN_TO_BE_REPLACED

Trulieve (OTCPK:TCNNF) is a large Florida-based cannabis company. They operate 47 cannabis stores including 45 medical cannabis dispensaries in its home state of Florida. Trulieve commands a dominant position in Florida, with ~50% market share in Florida sales of both THC concentrates and dry flower. In addition to Florida, Trulieve has stores in Connecticut and California and is building out a cannabis cultivation facility and dispensary in Massachusetts.

Trulieve's financial results are second-to-none in the U.S. cannabis industry. In the third quarter, Trulieve generated $70.7 million of revenue, up 150% annually and 22% sequentially. This sales growth is not being driven by acquisitions, but is instead driven by opening additional stores in Florida. The company also earned 62% gross margins, down from prior quarters but still higher than Trulieve's MSO peers.

Perhaps Trulieve's most impressive results compared to their peers are their exceptionally low operating costs: Trulieve spent only 29% of their revenue on operating costs while major peers spent much, much more. While other cannabis companies are extravagantly spending money they do not have, Trulieve has consistently kept costs extraordinarily low while simultaneously refraining from diluting shareholders with excessive stock-based compensation.

Florida provides cannabis investors with the best data available in the country. Each week, Florida's Office of Medical Marijuana Use provides sales figures (by weight) for three categories of cannabis products broken down by company. These reports give valuable insight for cannabis investors willing to wade through the data.

Based on the report released on March 20, 2020, it appears that consumers are flocking to cannabis stores as the COVID-19 crisis ramps up. Trulieve is a dominant cannabis company in Florida and is benefiting the most from this consumer behavior.

THC sales surge to record high: Sales grew 39% over the week before up to 126.0 kilograms of THC. These sales make up about half of the revenue of Florida cannabis companies and including vape pen cartridges, cannabis oils, and other THC-containing products.

Trulieve commanded 48% market share during the week, and has commanded 50% market share over the past six weeks. For the week, Trulieve sold 60.7 kilograms of THC in these products which was 16% higher than their previous all-time high in sales.

Trulieve commanded 59% market share in flower sales last week and has earned nearly 55% market share in Florida over the past six weeks. For the week, Trulieve sold a record high of 21,600 ounces of cannabis flowers, up 46% from their previous record high.

These sales trends in Florida align with other record sales. Among other locations, we have heard reports of high cannabis sales in Alberta, Ontario, Quebec, and Columbia Care (OTC:CCHWF) reported record sales in eight states last week.

Over the past year, Trulieve has generated $209 million of sales and EBITDA of $103 million. Partly due to onerous 280(NYSE:E) taxation, the company has trailing year operating cash flow of $24 million and has invested $73 million into expanding their business, primarily through expanding their cultivation capacity in Florida.

Analysts expect Trulieve to generate $360 million of revenue over the next twelve months and to earn EBITDA profits of $146 million. Barring significant disruption due to COVID-19, Trulieve may beat these estimates. Based on Florida sales data to date, I suspect that Trulieve will sell more than analysts expect in both the fourth quarter (~$81M vs $78.7M consensus) and in the first quarter (~$98M vs $85.6M consensus).

At a modest 10x forward EBITDA multiple, Trulieve's shares would have a value of $12.50/share, or 70% higher than their closing price on Monday. 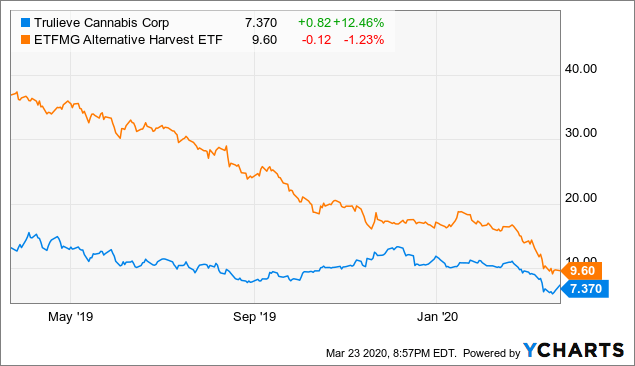 Despite its strong financials, Trulieve is very volatile, especially for investors used to blue-chip stocks. Trulieve's shares are down more than 50% from their highs and are likely to remain very volatile as the COVID-19 crisis plays out.

The COVID-19 crisis appears to have benefited Trulieve's sales last week, but may ultimately harm cannabis companies. The crisis may affect Trulieve's ability to maintain its cultivation and processing operations, as we have seen with Organigram, could potentially force stores to close, or may cause consumers to avoid shopping at Trulieve's stores. Thus far, we have not seen these effects and many cannabis stores have been declared essential businesses and allowed to stay open.

Outside of the pandemic, it is also very difficult for U.S.-facing cannabis companies to generate meaningful profits and cash flow due to Section 280(E) taxation. Until the law changes, cannabis companies are forced to pay tax on their gross profits and not allowed to deduct operating costs and interest. This makes meaningful cash flow difficult to achieve and will put continuing pressure on cannabis company balance sheets. This may require Trulieve to turn to capital markets for funding, which could potentially lead to investor dilution and losses.

Because of its high-risk nature and the volatile nature of markets during the pandemic, I recommend that investors limit their exposure to the cannabis sector. That said, Trulieve continues to be my favorite company in the cannabis sector and I am very bullish on their prospects especially while prices are depressed.