Trouble Ahead For Worst Dow Performer In Past Month, Trader Says

Home Depot is the worst-performing stock in the Dow in the past month, and Newton Advisor’s Mark Newton says there’s an even bigger breakdown coming for the home improvement retailer’s stock.

Despite still being up 23 percent this year, shares of Home Depot have actually broken below a one-year uptrend after a 9 percent fall in the past month, Newton said Wednesday on CNBC’s “Trading Nation.”

That’s setting up the retailer for even more trouble, he added.

“When you look to try and hammer down any sort of low, you just don’t see it just yet,” he said 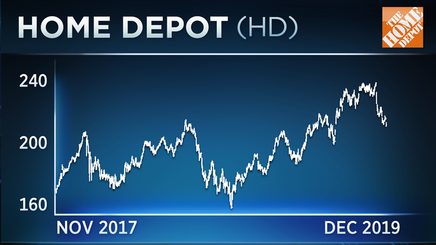 On a monthly chart, things aren’t looking much better after the stock became overbought, said Newton.

“Momentum actually went lower, and lower, and lower on this peak,” he said, referring to mid-November’s top price of about $238. “So you have what’s called negative momentum divergence, and that’s usually a warning sign,” he said. 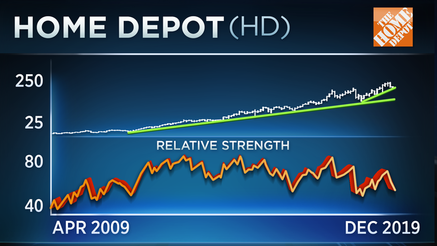 Based on a multiyear trend line on the monthly chart, Newton said Home Depot could actually pull back to around $170 in the next few months. That’s about 20% downside from the stock’s $211 price on Wednesday. It’s also the level at which Newton would consider buying the stock.

John Petrides, portfolio manager at Tocqueville Asset Management, said the stock reflects the state of the housing market and economy as a whole.

“I’m looking through the reaction on the stock today and trying to gauge what it means for the macro picture in terms of the housing market, and the U.S. housing market is really on solid footing,” he said on “Trading Nation.” “What you’re seeing is a slowdown in the rate of change. Now that we’re at a normalized level, we’re probably going to sort of bump around in this ranged level, and I think that’s what we’re seeing, it’s the read-through on the stock.”