The rally isn't just a relief for long-time shareholders, it's triggering a big-time breakout that could lead to further gains.

First-quarter earnings of 37 cents per share came in more than double analysts' estimates of 15 cents. Revenue of $787 million beat consensus expectations by almost $12 million and grew more than 18% year over year. User growth came in better than expected too, although management's second-quarter revenue outlook came up a little short of estimates.

Investors are shrugging that off though, with Twitter stock closing higher by 15.7% at $39.77 on the day. The report is seemingly giving a boost to the rest of the social media space, with Snap, Facebook, and Pinterest all trading higher on Tuesday as well. 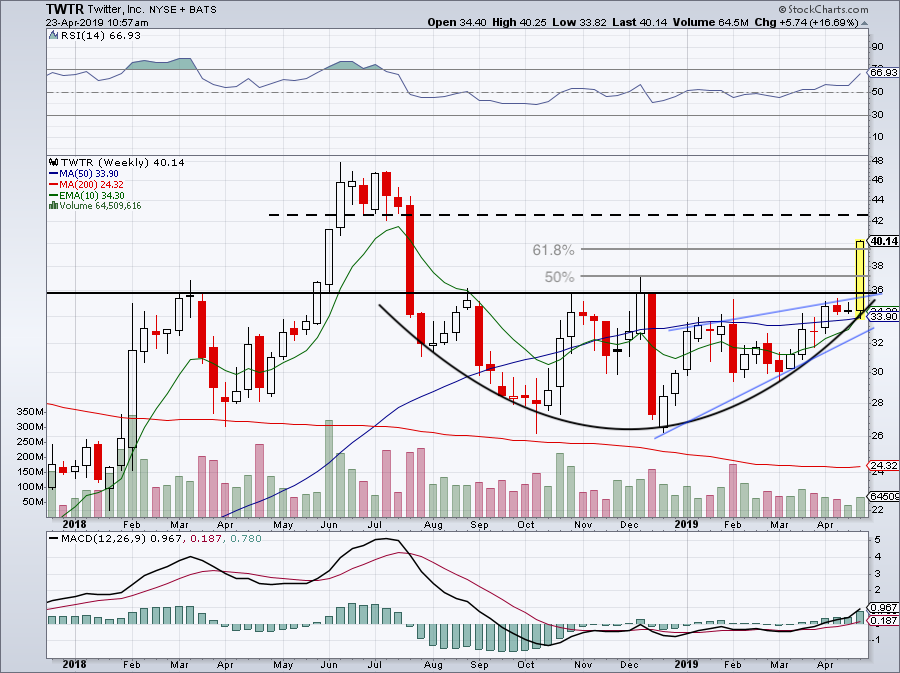 Twitter's better-than-expected report is clearly giving the green light for the bulls on the sidelines to get in on the name. How much more upside can we expect?

Twitter stock ripped right through long-time range resistance at $36, as well as the 50% retracement near $37. In doing so, it also hurdled the 61.8% retracement for the 52-week range at $39.60. Bulls would like to see Twitter stock hold these key Fibonacci levels and continue to press higher.

While a 15%+ rally would typically worry investors about a potential pullback, realize that TWTR stock isn't overbought yet. So while the one-day gains are certainly noteworthy it wouldn't be out of the question to see the share price hold onto those gains in the ensuing sessions and potentially even add to them.

I want to see if Twitter can get to $42.50 and if it does how it handles this level. Above can set the stage for a run at its prior highs. If it acts as resistance, we could get a pullback into some of these key Fibonacci levels.

On that note, what can we expect from Twitter if shares can't go higher? If Twitter struggles from here, I want to see $37 hold as support. Technically speaking, as long as it holds prior range resistance at $36 it's still good on the long side. But sentiment would take a big hit if Twitter stock gave up almost all of its post-earnings gains.