The stock market is starting to look good again to JPMorgan Chase & Co.

After August’s sell-off, the time to buy stocks is approaching, strategists led by Mislav Matejka wrote in a note Tuesday, saying equities will move higher starting with an up trend in September. Benchmarks including the S&P 500 Index, the Stoxx Europe 600 Index and the MSCI Asia Pacific Index are poised for their biggest monthly declines since May.

“While we have been advocating a consolidation call during August, we continue to expect that the pullback will not extend for longer than the May one did, and still believe that the market will advance into year-end,” the JPMorgan strategists wrote. 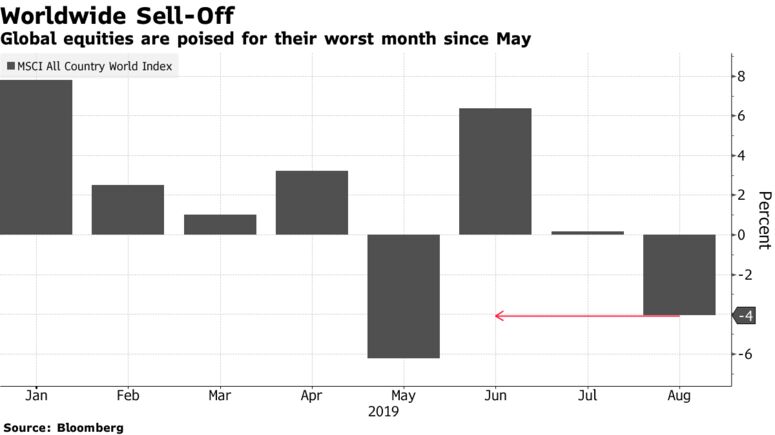 An escalation in the trade war between the U.S. and China this month has stoked investor concern about the outlook for the global economy, hurting equities worldwide. Major asset managers including Legal & General and Manulife Investment Management have taken profit on their risk assets and entered a wait-and-see mode.

JPMorgan sees a string of positive catalysts that could lift equities out of the doldrums, such as the restart of the European Central Bank’s quantitative easing program, the potential for a second and bigger rate cut by the Federal Reserve, along with signs that activity may have bottomed out and improving technical indicators. Stocks worldwide were mostly in the green on Tuesday, with the S&P 500 and the Stoxx Europe 600 Index each rising more than 0.5% as of 3:17 p.m. in London.

The New York-based firm’s bullish outlook clashes with that of UBS Global Wealth Management, which has gone underweight on equities for the fist time since the euro-area crisis. The Swiss asset manager cut its stock positioning relative to high-grade bonds to reduce its exposure to trade wars and political uncertainty, Global Chief Investment Officer Mark Haefele wrote in an Aug. 25 note to investors.

Positive earnings delivery, JPMorgan stresses, is a key way to ensure that market pullbacks don’t become extended. Consensus profit projections are “rather conservative,” according to the strategists, who noted that an outright earnings contraction was historically experienced only during recessions.

“It is too early to expect the next U.S. recession and one should be constructive on equities,” they wrote.