Market volatility is up in recent sessions, and END_OF_DOCUMENT_TOKEN_TO_BE_REPLACED

As tech takes a tumble this week, there END_OF_DOCUMENT_TOKEN_TO_BE_REPLACED

Stock markets are known for often going too far. So can bond markets, although they tend to go mad a little less often, and to do so in a way that’s far less visible to the general public.

And as bond markets are generally thought to be more sober, the extraordinary rally in recent weeks has generally been taken as a sign that a recession is at hand. That, after all, is what $15 trillion in negative-yielding bonds around the world, and a virtual all-time low in the 30-year U.S. Treasury bond, would imply. But it is at least possible that this is the moment when the three-decade-long bull market in bonds has at last reached an untenable extreme, ready to snap back. This might, in other words, be the bond market equivalent of early 2000 and the dot-com bubble in the stock market.

But I’m not sure that this is right, and I’m not even sure I want it to be right. The bond market’s odds on a recession look overdone at present, but there are certainly reasonable scenarios that suggest the current trade impasse between the U.S. and China could lead to something terrible. This column from the veteran New York Times columnist Thomas Friedman, which warns of “a digital Berlin Wall and a two-internet, two-technology world: one dominated by China and the other by the United States,” accurately gauges how bad things could get. And yet it’s still worth talking to investors prepared to make the call that the next move in yields will be higher, and who did so even before yields rose from their lows in the U.S. on Wednesday.

One argument from Peter Atwater, a behavioral economist who runs the Financial Insyghts consultancy, is that such columns do indeed show that the mood has reached an extreme of catharsis or revulsion. Financial journalists live in fear of becoming contrarian indicators, and he suggests that choices of images and covers can often unconsciously capture extremes of sentiment. To that end, he cites this recent cover from Bloomberg Businessweek:

To be fair to my great colleagues at Businessweek, this cover was at the very least a great short-term call, given what has happened to rates in recent weeks. But vortex imagery does suggest that a long-term trough in sentiment could be at hand. Here’s another example from the Wall Street Journal, which Atwater also highlights. It illustrates the problems for Japanese government bonds:

Such indicators suggest that sentiment might be reaching a point of cathartic extremes. It’s also worth looking at what leading figures in the market are saying. Pacific Investment Management Co.’s global economic adviser Joachim Fels, one of the most respected voices on the bond market, published a blog post Tuesday outlining how the Fed could find itself returning to quantitative easing, or bond purchases. He didn’t predict that this would definitely happen, but the mere fact that such scenarios are being aired in public by market leaders tells us sentiment is becoming extreme. Continuing on the subject of extreme sentiment, we also have more angry presidential tweets, this time urging the Fed to stop quantitative tightening — apparently ignoring the fact that it did just that last month.

Then we start looking at what markets are doing. Atwater drew my attention to this much shared chart comparing the performance of long German bunds with the DAX Index (which, unlike most other stock indexes, is compiled on a total return basis). Societe Generale’s famously bearish strategist Albert Edwards has also cited it: 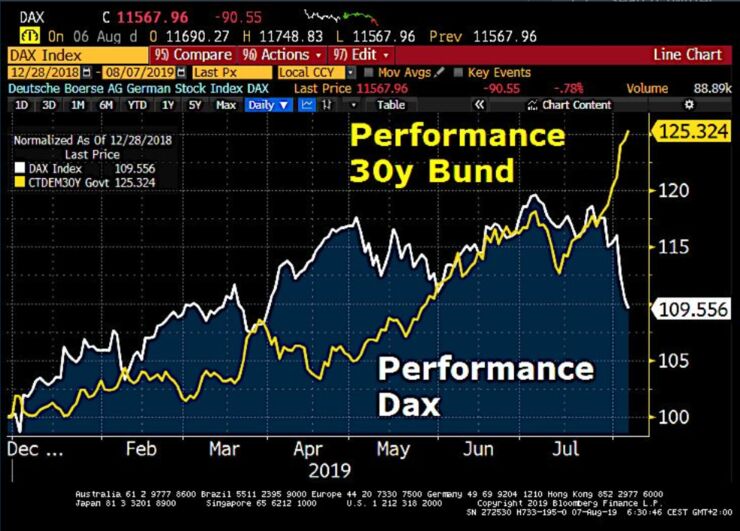 Another chart all over social media is the price of the 100-year Austria bond, which I wrote about a few weeks ago. It has gone absolutely ballistic. Netflix or Amazon.com would be only too happy to have a share price that performed like this — and remember this is charting the price that you must pay to lend money to the government of Austria, knowing that you will not get your principal back for 100 years: 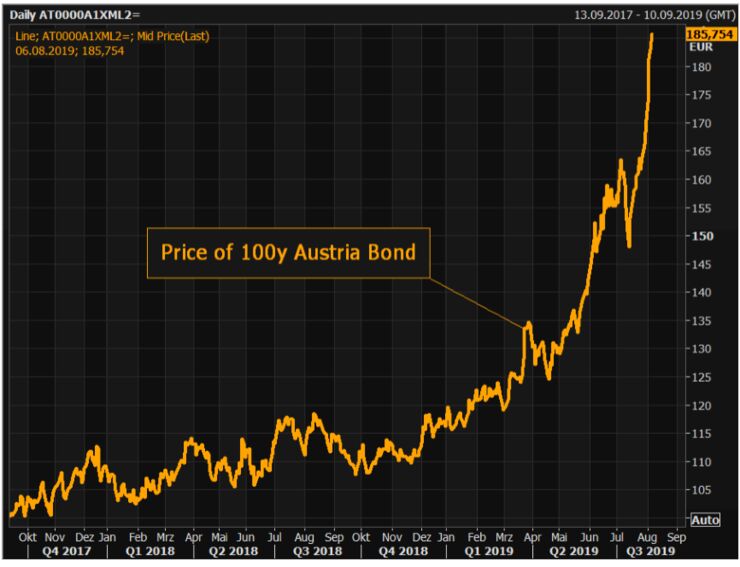 Within the U.S., before the turnaround in afternoon trading on Wednesday, 30-year Treasury yields almost fell below their all-time lows set in mid-2016 after the Brexit referendum, while parts of the U.S. yield curve reached its deepest inversion since the Great Recession. In both cases these were emphatic, and probably extreme, signs of deep pessimism about the prospects for growth, and showed a great fear of looming deflation: 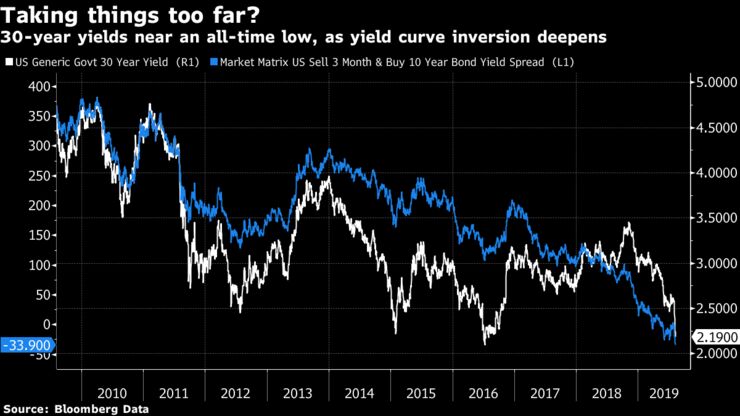 For one final example, let me take you to my old stomping ground of Mexico, which issued a dollar-denominated century bond in 2010. You might have thought that the opportunity to lend money to Mexico, knowing that you will not receive it back until the year 2110, would be very unappetizing at present. Few countries are more exposed to shifts in the global trade cycle than Mexico, a country that has a new, strongly left-wing president who has not yet gained the trust of international markets. But over the last 12 months you could have made almost 50% by shorting Mexico stocks and putting the proceeds into the country’s century bond. 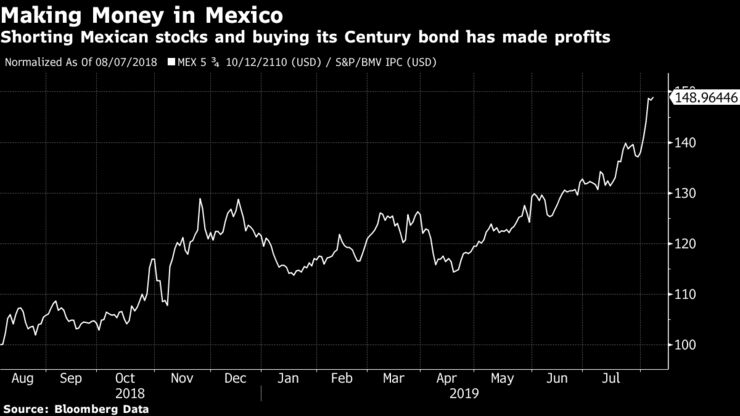 So there are plentiful signs that markets may have reached a point of revulsion, or untenable extremes. Or, in Monty Python terms, the moment the brigadier with the big mustache appears on the screen and says: “Stop that, it’s all got frightfully silly.” And if we look at a chart of the 10-year Treasury yield, it looks as though the brigadier appeared in trading rooms at about 10 a.m. New York time on Wednesday. At that point, it had dropped more than 10 basis points, falling below the round number of 1.6%. By the end of the session it was above 1.71%. We cannot know yet whether this was the point of revulsion, but when it arrives it will look a lot like this: 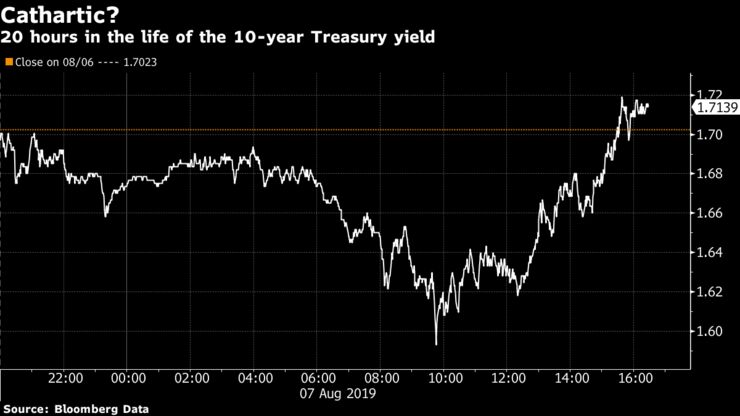 All of this matters. Lots of money is riding on the notion that central banks will keep cutting interest rates (not unreasonably after three central banks, representing countries as different as New Zealand and India, did so Wednesday), and that we will settle into a deflationary, Japanified environment. The greatest possible “pain trade” would therefore involve a return to inflation. Could this really happen?

Vincent Deluard, a strategist with INTL FCStone Financial, argues that it could, even if some of the worst trade scenarios — which have largely driven the latest drop in yields — actually come to fruition. He points out that tariffs raise the costs of goods and are hence inflationary, and breaks his argument down as follows:

By his argument, if the market has focused on a need to find havens, it must eventually yield to the fact that protectionism is eventually bullish for inflation and bearish for Treasuries — both because it sparks inflation and because it reduces the American ability to finance itself with the excess savings of trade partners. One parallel, raised by many, is 1981, which saw cathartic lows for the stock market and highs for bond yields, based on the assumption that inflation would continue forever. What we are now experiencing might very easily come to look like the bookend for that event.

Robert Robis, chief fixed income strategist for BCA Research in New York, draws a parallel with 2016, when longer Treasury yields posted their all-time lows. On that occasion the final flight to safety followed the Brexit referendum and the instant move by various central banks to ease tensions. There is an obvious parallel with the acceleration of the trade war. Then, as now, China had embarked on a concerted attempt to stimulate the economy earlier in the year, which began to show in the data later in 2016. Whether anything comparable to the election of President Donald Trump is on tap for the rest of this year is another question. That certainly shocked yields higher in 2016. But the parallel in general looks strong: 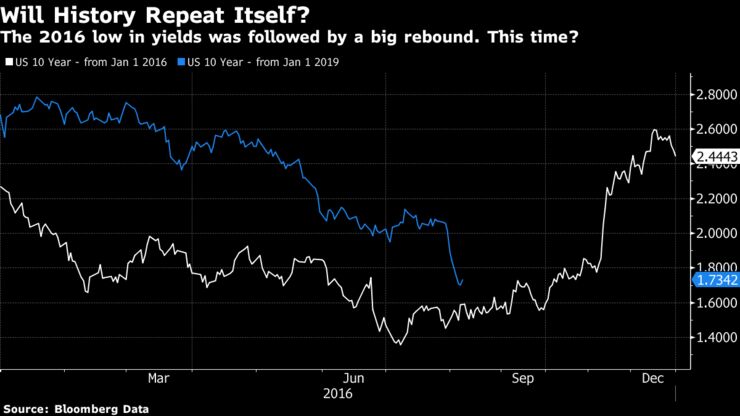 Most important, in Robis’s view, is Europe. Somewhat of a bystander in the trade war imbroglio, Europe is at the center of concerns over deflation, and its central bank is about to embark on QE once more. Despite startlingly low yields across the continent, inflation remains positive, albeit low. If its banking system can survive this latest shock of low rates and inflation begins to pick up again, Europe could yet be the catalyst for an epic pain trade, as we all have to assimilate the notion that deflation may not be forever.

Another catalyst later in the year might yet involve Trump, just as in 2016. If China and the U.S. can fashion a trade peace, and convince the markets that they mean it, a lot of people will find themselves on the wrong side of the trade.

In such an environment, it would obviously be a very bad idea to hold bonds. Stocks might benefit at least initially from the sentiment that a total slowdown could be averted. But if there is something to buy for now, to protect against these eventualities, maybe it might be a bet on faster inflation through the bond market. It can, after all, be done very cheaply. And if this does indeed prove to have been the moment of revulsion, it would pay off.