This ‘Jinx’ed Month, These Are Your 5 Best Bets

Despite the scares, September has somehow been positive for Wall Street. Despite the stock market having to bear with the protracted trade war and impeachment fears, the broader S&P 500 eked out a gain of 1.7%.

But, October may be a different story. Needless to say, it has been a historically weak period for equities, what has been described as the “jinx month” for stocks, per the Stock Trader’s Almanac. After all, some of the worst market crashes took place in the month. There were mega “crashes in 1929 and 1987.”

What’s more, the Cboe Volatility Index or VIX tends to soar this month and had climbed more than 21 points on average over the past three decades, per Macro Risk Advisors. 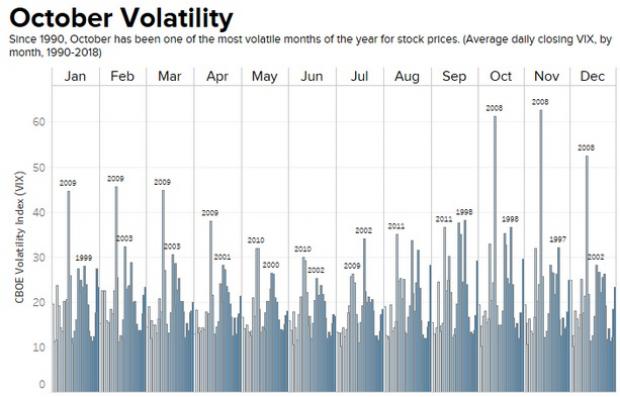 However, the “October Effect” phenomenon does seem overrated. September has seen more declines than October. And from a historical perspective, October has seen the end of more bear markets than any other month. Thus, October is a month suitable for contrarian buying. At the same time, October has been relatively stronger during midterm election years, with 2018 being one such year.

According to Almanac, the Dow normally rises an average 0.6% in October and 3.1% in midterm election years. Similarly, the broader S&P 500 usually climbs 3.3% in midterm Octobers, way more than its typical rise of 0.9% over the month.

To top it, even though October has typically “oscillated” between intra-day gains and losses from 1938 to 2018, it had a tendency to finish the month on a promising note, data from Bespoke Investment Group showed.

Paul Hickey, founder of Bespoke, said that “while there has tended to be some weakness in the opening days of the month, from that point on, the S&P 500 has seen steady gains finishing with an average gain of 1.89%.”

And this time around, it should certainly not be any different. After all, things are looking up on the trade front. Treasury spokeswoman Monica Crowley recently said that the Trump administration isn’t thinking of blocking Chinese companies from “listing shares on U.S. stock exchanges at this time.”

A Bloomberg report had earlier stated that the White House was contemplating ways to curb U.S. portfolio into China, a move that could affects billions worth of investments and aggravate the trade war. But, White House trade adviser Peter Navarro confirmed that the article was highly inaccurate. Such a confirmation is encouraging as otherwise the consequences for the stock market would have been far-reaching given that Chinese stocks are currently worth more than $1 trillion.

5 of the Best Stocks to Buy in October

With October set to repair its reputation, investing in fundamentally sound stocks that are poised to gain in the near term seems judicious. We have selected five such stocks that flaunt a Zacks Rank #1 (Strong Buy). Such stocks also boast a VGM Score of A. Here V stands for Value, G for Growth and M for Momentum and the score is a weighted combination of these three metrics. Such a score allows you to eliminate the negative aspects of stocks and select winners.

Guess', Inc. GES designs, markets, distributes, and licenses lifestyle collections of apparel and accessories for men, women, and children. The Zacks Consensus Estimate for its current-year earnings has moved up 5.5% over the past 60 days. The company’s expected earnings growth rate for the current year is 37.8% compared with the Textile - Apparel industry’s expected rise of 9.7%.

NRG Energy, Inc. NRG operates as an energy company in the United States. The Zacks Consensus Estimate for its current-year earnings has climbed 4% over the past 60 days. The company’s expected earnings growth rate for the current year is 61.4% compared with the Utility - Electric Power industry’s estimated rally of 3.9%.

Cardtronics plc CATM provides automated consumer financial services through its network of automated teller machines (ATMs) and multi-function financial services kiosks. The Zacks Consensus Estimate for its current-year earnings has moved up 8.9% over the past 60 days. The company, which is part of the Financial Transaction Services industry, is expected to notch solid earnings growth of 8.4% in the current year.

AngloGold Ashanti Limited AU operates as a gold mining company. The company operates 14 mines and three projects in 10 countries, including the United States. The Zacks Consensus Estimate for its current-year earnings has moved 20.5% north over the past 60 days. The company’s expected earnings growth rate for the current year is 154.7% compared with the Mining - Gold industry’s projected rally of 19.6%.

SeaWorld Entertainment, Inc. SEAS operates as a theme park and entertainment company in the United States. The Zacks Consensus Estimate for its current-year earnings has moved up 11.8% over the past 60 days. The company’s expected earnings growth rate for the current year is 209.6% compared with the Leisure and Recreation Services industry’s projected rally of 0.3%.