We’ve been pounding the table on Lucid Motors END_OF_DOCUMENT_TOKEN_TO_BE_REPLACED

This Is One Recession Where Stocks Can Actually Make You Money

Corporate America has a summer horror flick for you: an earnings recession.

An earnings recession is two successive quarters of earnings-per-share decline. Such a decline is projected to not only have occurred in the second quarter of 2019, but is also forecast for the third quarter.

In fact, earnings recession fears may be overblown, as the stock market historically tends to do better when earnings are declining than advancing.

That’s because an earnings recession increases the likelihood that the Federal Reserve will reduce interest rates. And, unless corporate profitability falls completely out of bed, investors love lower rates more than they hate slower earnings growth.

The last several quarters are a textbook illustration. During the fourth quarter of 2018, when corporate profits were mushrooming, the S&P 500 slid 14.0%. In the first quarter of this year, in contrast, when the year-over-year EPS growth rate was negative, the S&P 500 rose 13.1%. In the second quarter, for which FactSet projects the EPS growth rate to be minus 2.6%, the S&P 500 added another 3.8%.

Nor is the past several quarters’ experience unique, according to data compiled by Ned Davis Research. Since 1927, the firm found, the stock market has performed the best in those quarters in which the year-over-year EPS growth rate for the S&P 500 was between 10% and 25% lower. In such quarters, the S&P 500’s average annualized return was 25.0%.

When year-over-year earnings growth was above 20%, in contrast, the S&P 500 gained an average of just 2.6% annualized.

Only when year-over-year EPS growth rates were especially negative — less than minus 25% — did the stock market perform poorly, on average. Otherwise, as you can see from the accompanying chart, there has been a consistently inverse relationship between EPS growth rates and S&P 500 performance. 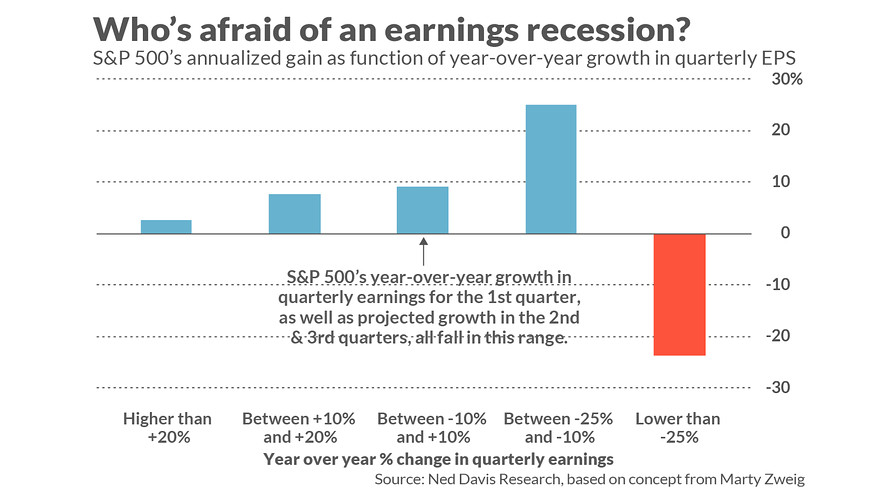 These results are counterintuitive, to say the least. But the facts are undeniable.

If it’s difficult to accept these results, consider another study that takes a completely different approach to reach the same conclusion. This other study was conducted a year ago by Vincent Deluard, head of global macro strategy at INTL FCStone, a financial services firm.

Deluard conducted the following thought experiment: How much money would you make if you somehow knew one quarter in advance what the final GDP growth rate would be for that quarter? Since we don’t even have a preliminary government estimate of that quarter’s growth rate until well after it’s over, and since we have to wait even longer for the final number, Deluard’s thought experiment involves a considerable amount of clairvoyance.

Yet this advance knowledge was of little help. Deluard constructed a portfolio that was fully invested in stocks if the subsequent quarter’s GDP growth was higher than in the immediately preceding one, and otherwise 100% in cash. This portfolio lagged a buy and hold by 1.0 annualized percentage points from 1948 through early 2018.

The bottom line? Even if earnings in coming weeks and months are disappointing, don’t automatically assume that this will be bad for the stock market.