Airlines stocks are in a tailspin this week.

United Airlines, Delta, JetBlue and American Airlines have all fallen sharply in the past week as the rest of the transports stocks tumbled. The group also dropped Thursday after the U.S. moved to issue tariffs on Airbus planes.

One name may have fallen too far, too fast, according to JC O’Hara, chief market technician at MKM Partners.

“The weakness is widespread and over the last few days that weakness has really started to accelerate, but one stock really jumped out at us and that was American because the chart is actually so bad, we question is it actually good,” O’Hara said Thursday on CNBC’s “Trading Nation.”

“We call this last-chance support because this is exactly where the price rallied in 2013, again in 2016 we had a strong bounce off that $24 level,” he said. “This could have a chance to bounce here.”

However, if it fails at this level, there will be a lot more pain in American’s future, he added.

“We say last-chance support because if we break $24, there’s no technical levels to stop the decline so very, very key area right here,” O’Hara said. 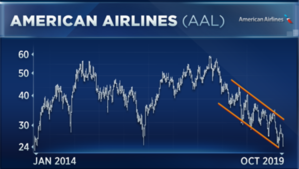 “I still like Delta here. I mean this thing is just way oversold. It has come back maybe 20% or so from its peak a few months ago,” Tepper said during the same segment.

Tepper said the Atlanta-based carrier is the best in show for three reasons.

“No. 1, they don’t have any 737 Max exposure so they have the ability to increase capacity while none of their competitors can do the same. Second thing is they do have the best maintenance team in the industry and that helps them to extend the useful lives of their aircraft which helps margins,” he said. “The third thing is their partnership with American Express is the gold standard, and it literally delivers cash straight to their bottom line while smoothing out the cyclical nature of their business.”

He adds that Delta’s dividend yield makes it an attractive pick. Delta yields 3%, higher than the S&P 500′s 2% yield.