The market took Friday’s jobs print pretty hard, with interest rates resuming their surge and hitting stocks. But the hurricane-affected data had a few highlights – namely the unemployment figure, which slid to 3.7%, below consensus estimates and on par with the Fed’s year-end forecast. That level also happened to be the lowest unemployment print in 48 years.

In short, the American economy, which is strengthening thanks to the combination of Trump’s tax cuts and his expanded deficit spending, is booming. That means for students who graduated in the spring, or are preparing to graduate next spring, should have options when it comes to finding a job. While thousands of students dream of moving to New York City, San Francisco or Washington, DC, contrary to popular belief, job markets in these hubs aren’t as robust as many believe.

In an analysis of regional BLS data, CNBC showed that the bulk of America’s tightest job markets aren’t found in coastal regions. Of the 20 top metro areas where unemployment rates are roughly half the national average or less, only five are situated along the coasts, according to the Bureau of Labor Statistics. Ames, Iowa boasted the lowest unemployment rate with just 1.7%. Four other metro areas on the list are in Iowa, while three are in Idaho.

Still, eight of the metro areas on the top 20 list were in California, which has an unemployment rate of 4.2%, slightly higher than the national rate.

The city with the highest unemployment rate is Yuma, Arizona, with 22%.

But the low unemployment rates might not last much longer. Given the importance of manufacturing and farming to the midwestern economy, President Trump’s tariffs could kill thousands, if not hundreds of thousands, of jobs. 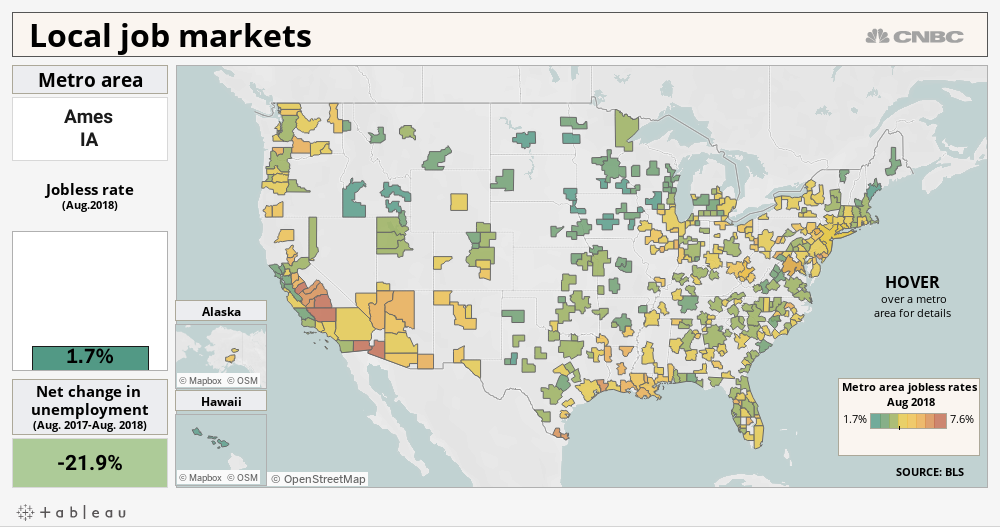 The BLS releases a regional breakdown of its labor-market data roughly two weeks after the national numbers. In a few months, economists will have a better idea of what kind of impact Trump’s tariffs will have on the Midwest.