These 3 Stocks Could Boost Your Income 64%

Looking for a 27%+ gain in 2020? Then you’d better buy now. But you won’t want to go near the media darlings most folks gamble on: I’m looking at you, Tesla (TSLA).

Instead, we’ll ride to 27%+ gains with some of the sleepiest stocks out there! I’m talking about dividend payers—and better yet dividend growers. I’ll show you three names and a powerful (and simple) strategy you can start using now shortly.

First, let me tell you why, even with the S&P 500 popping new records daily, there’s still plenty of upside left as we roll into 2020.

2020 Market Drivers: The Election and the Fed

The first? The calendar: according to the Stock Trader’s Almanac, since 1952, the market has risen 10.1% on average during election years when an incumbent president is running for a second term.

In fact, the market has only tumbled four times in presidential-election years stretching back to 1928, according to data from The Balance. And second-term election years have racked up some big gains. Like in 1996, when Bill Clinton took on Bob Dole and the markets climbed.

Which brings me to the second (and even better) 2020 market driver: Fed Chair Jay Powell. Despite almost daily Twitter beatings from the president, the poor fellow seems determined to pause his latest string of rate cuts at three. Futures traders agree—they’re betting on rates being the same in December 2020 as they are now: 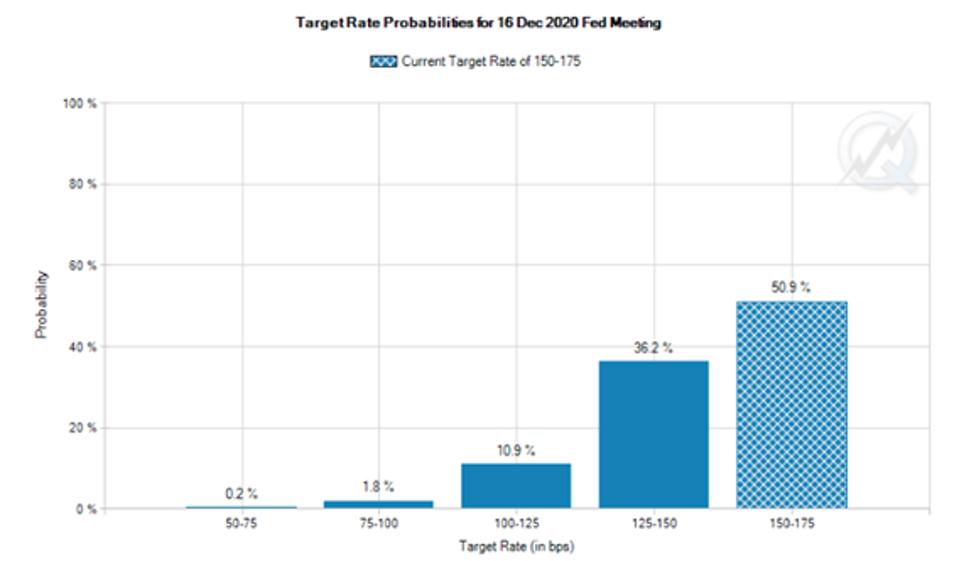 You’re probably wondering how a comatose Fed could drive stock prices higher. Let’s look again at history: LPL Financial examined three previous times the Fed cut by a quarter point three times in a row: in 1975, 1996 and in 1998.

The finding? A year after the last cut, stocks were up 20%, on average. And again, 1996 is the year to watch here, because the Fed brought in its last hike on January 31 of that year—six weeks before Bob Dole swept Super Tuesday—and stayed on the sidelines until March 25, 1997, when it hiked by a quarter point.

Look, I’m not saying history is going to repeat exactly here. But I think you’ll agree that these two patterns from 1996—a year that’s looking a lot like 2020—make a strong case for more upside, despite recent Chicken Little chatter about another 2008.

Here’s how we’re going to play them.

I’ve written before about how a rising dividend is a critical share-price driver.

It goes like this: a company hikes its payout, which drives up its dividend yield (or the yearly payout as expressed as a percentage of the current share price). And then, as if on cue (though sometimes with a delay, as we’ll see below), investors pile in, driving the share price up … and the dividend yield back down.

I’ve seen this repeat time and time again—like with self-storage REIT National Storage Affiliates (NSA), which has ridden its growing payout to a 60% price gain in just over three years since I recommended it in my Hidden Yields dividend-growth advisory.

It’s unmistakable! In the chart below, you can see NSA’s price moving up with each dividend hike. (Note that with the share price now running ahead of the dividend, I currently rate NSA as a hold.)

Or National Research Corp. (NRC), which I recommended to Hidden Yields readers in December 2018, after its 183% dividend growth pulled its share price up 167% in the preceding four years.

Since we got in, the healthcare information provider has spoiled us with a big special dividend and a 12% hike to its regular payout. Throw in the corresponding jump in its stock price, and we’re sitting on a 61% total return in less than a year!

So what’s the secret?

Simple: buy a dividend that’s growing strongly (and ideally accelerating). And if you buy as the share price falls behind the payout’s growth (or just before the rest of the crowd catches on), you’ll set yourself up for even more upside.

That makes this “dividend 2-step” perfect for amping up our Fed- and election-driven gains in 2020. Here are three stocks with growing payouts to consider.

General Dynamics, payer of a 2.2% dividend, is in the sweet spot of three surging markets: business jets ($248 billion of which will be purchased in the next decade, according to Honeywell Aerospace), defense and cybersecurity.

No wonder GD’s sales jumped 7% in Q3, with earnings per share soaring 8.7%. And if you’re worried GD’s business is too cyclical, get this: it ended the quarter with a backlog of $67.4 billion, or $103 billion including contract options. Both figures eclipse GD’s $53-billion market cap!

No wonder the stock is a Dividend Aristocrat, having grown its payout for 27 straight years. And that payout growth is accelerating!

Despite that, the stock price has fallen well behind the payout’s growth recently, setting the shares up for some nice “catch-up upside.”

The topper? With revenue and profits soaring, plus $67 billion of sales locked in, it’s only a matter of time before General Dynamics’ share price closes that gap.

Next up is Alexandria, payer of a 2.5% dividend yield, but that masks a payout that’s been growing like a weed—up 186% in the past decade, with the real estate investment trust (REIT) regularly hiking twice a year.

The share price has struggled mightily to close that gap, and it’s getting close, but there’s still plenty of pull left in this dividend magnet.

The thing to take away from the chart above is the frequency of Alexandria’s dividend hikes—the REIT regularly hikes its dividend more than once a year! That’s because its modern buildings are in high demand by pharmaceutical and life-sciences companies.

As a result, Alexandria enjoys sky-high 96.6% occupancy, and its funds from operations (FFO, a better REIT measure than earnings per share) are soaring, up a solid 13.5% in the third quarter from a year earlier.

Plus, Alexandria investors enjoy two “dividend safety nets”: one is the fact that its current leases have a long time to run, with an average remaining term of 8.3 years. The other is Alexandria’s safe payout ratio—at just 58% of FFO, there’s plenty of room for more hikes; ratios of 90% or more are usually safe in REIT-land, thanks to these trusts’ steady cash flows.

Finally, back to self-storage, my favorite “profit either way play.” Is the economy booming? Great! Americans will stuff their homes with, er, “stuff” … then move more into self-storage.

EXR has filled its units in the last five years and handed the rent checks to investors as a dividend that’s soared 91%. Lately, the price has fallen behind that payout growth, rising 82%—setting up a nice entry point.

Finally, Extra Space’s payout ratio clocks in at a low 73% of FFO. Combine that with 94% occupancy—near all-time highs—and you have plenty of room for more hikes.