Macy’s may not be the best stocking stuffer this holiday season.

The retailer, which is down nearly 80% from its 2015 peak, is set to report earnings Thursday morning. TradingAnalysis.com founder Todd Gordon says that retail carnage is likely to continue based on technical retracements.

“The rule that we use if you’re looking at these retracements ... basically if you break the 78%, roughly three-quarters, if you don’t hold that, the rule says you should retest the lows, and that’s at $5,” Gordon said Tuesday on CNBC’s “Trading Nation.” 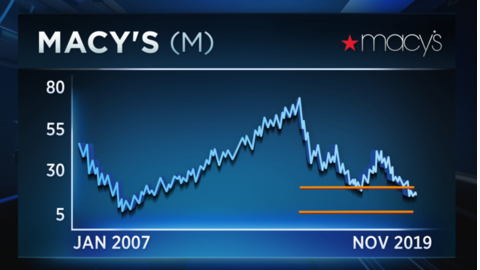 Based on his technical analysis, when Macy’s broke below that three-quarters retracement of its 2015 highs at roughly $20, that set it on a course back down to $5. Macy’s would fall another 67% from its current price above $15 before reaching that level.

The department store chain’s stock dropped over 10% on Tuesday after retailer Kohl’s sour earnings report. Kohl’s fell nearly 19% on Tuesday leading the XRT retail ETF to its worst day of the month.

Looking at the technicals, Gordon doesn’t see much hope for beaten-down Macy’s but recommends a few other names with stronger qualities.

“I think we’re going to lows [in Macy’s]. There’s plenty of strong names in retail — Costco, Target — if you’re looking for clothing retailers. I would say a no-touch here in Macy’s,” said Gordon.

Quint Tatro, president of Joule Financial, isn’t counting the retailer out and is hoping on a turnaround for the worst performing S&P 500 stock.

“Personally, I added some shares today. The stock is interesting here. I am not normally a bottom-fish trader. I don’t try to catch falling safes, but the stock is trading like it’s going out of business,” Tatro said during the same segment.

Tatro points to Macy’s fundamentals and says investors would assume the company couldn’t cover their dividend.

Tatro said he won’t add any more to his portfolio until he sees a dramatic turnaround in earnings growth and fundamentals.

“Ultimately, from a technical perspective, it’s got to break back above $17,” he said.