The Worst Appears to Be Over for CVS Stock

CVS Health (NYSE:CVS) can’t catch a break. Neither can its shareholders. CVS stock is at roughly half the value it was at its mid-2015 peak. And it only recently came off its May multi-year lows. Good news about cancelled drug-rebate plans that would have cost it a fortune shoved shares higher earlier this month. Now, that move has largely come undone. The bears appear to remain in charge.

Nothing lasts forever though. While CVS Health stock may look and feel stuck in a downtrend, don’t despair: what the company is building is very much the future of healthcare.

The organization gave stakeholders of CVS stock another glimpse of that future this week.

The short version of a story most everyone knows: the state of the healthcare system in the U.S. is laughable. Its sheer size and complexity, coupled with misguided regulation, has made it unaffordable for all.

That’s a key part of the reason strange-bedfellows Amazon (NASDAQ:AMZN), JPMorgan Chase (NYSE:JPM) and Berkshire Hathaway (NYSE:BRK.A, NYSE:BRK.B) made this announcement last year: they’re forming their own healthcare company of sorts for their employees. Though not insurance per se, it was a means of offering low-cost clinical care in-house. Further, this move would also cull at least some of their healthcare and insurance expenses.

However, it’s hardly the only instance where such lines have crossed.

Case in point: CVS rival Walgreens Boots Alliance (NASDAQ:WBA) has partnered with clinics to offer in-store (or near-store) primary care, as has CVS.

Arguably, CVS took the boldest even if not the biggest step towards an industry shakeup last year. That was when the pharmacy giant announced its intent to merge with health insurer Aetna. The deal closed in late 2018.

Responses were mixed. Concerned observers noted it was an opportunity for self-serving steering that crimps competition even if it doesn’t kill it. Others lauded the idea, pointing out that with one less middleman, the industry could lower costs.

Regardless, this is the new norm for the very same healthcare industry that collectively priced itself into the trouble it’s now looking to escape.

It wasn’t a surprise, but it was a milestone nonetheless.

CVS Health was and is a pharmacy, and now facilitates clinical/frontline care. Aetna is an insurer and can keep hospital and drug prices in check. However, neither arm has pushed its way onto biotech equipment turf until now.

Last year’s news of the planned project already put dialysis rivals into action. Davita (NYSE:DVA) as well as Fresenius Medical Care (NYSE:FMS) have both ramped up efforts to facilitate more at-home dialysis. Such moves saves patients from visits to their specialty clinics.

Meanwhile, the Aetna/CVS deal has put the nation’s traditional frontline players on notice. Ken Kaufman, managing director and chair of consulting firm Kaufman Hall, commented earlier that year that the once-unlikely pairing was “a shot across the bow of hospitals in America.”

In the same vein, the creation of Haven — the name given to the entity co-created by JP Morgan, Amazon and Berkshire — was a shot across the bow of pharmacies like CVS and insurers like Aetna.

It’s CVS, however, that’s leading the charge of disruption, even if that means disrupting itself.

CVS Stock Is Undervalued and Oversold

CVS Health may be the face of a new era of integrated healthcare, but investors are clearly not buying it. Extending a pullback that began in 2015, 2017’s initial efforts to team-up with Aetna along with uncertainty as to how the business might change under President Trump have ultimately worked against CVS Health stock.

That concern largely has no merit though. Indeed, with Rite Aid (NYSE:RAD) on its heels and Walgreens not taking the same bold step CVS did to shape its own future rather than be shaped by it, investors have seemingly overlooked CVS Health’s impressive past and compelling future.

Revenue was growing and will continue to do so. The introduction of Aetna’s business a couple of quarters ago had no bearing on the revenue trajectory. Analysts expect earnings per share of CVS stock to slide once this year. And then, it will likely move on to record-breaking levels for the newly combined companies. That’s a victory in and of itself. Consider that the new-share issuance of CVS Health stock partly funded the acquisition. 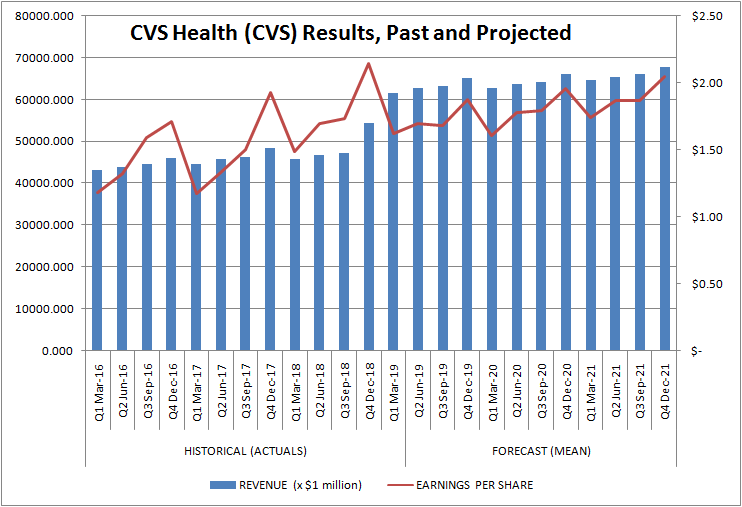 Perhaps the most bullish argument of all is the stock’s forward-looking price-earnings ratio of 7.9. With or without challenges ahead, that’s dirt cheap given the profit CVS Health could drive simply by coasting ahead.

Looking Ahead for CVS Health Stock

That being said, two key clues suggest the sentiment tide may have finally taken a turn for the better.

One of them is the way CVS shares have repeatedly found a technical floor near $51.70. This is plotted with a yellow, dashed line on the chart. Bears have tested that floor three times since March, but it held up every time. It’s a foundation the bulls can build on now that it’s been established.

The other noteworthy nuance here is the amount of bullish volume that’s kept CVS stock propped up. While February’s pullback volume was significant, the same number of buyers (and perhaps more) have wanted to step back in.

It’s the first time we’ve seen this much technical support aided by this much buying interest. 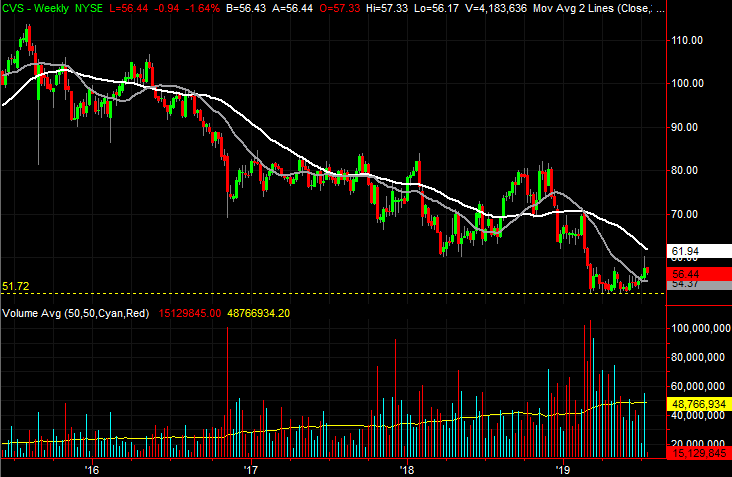 There’s still work to be done, and there’s still plenty of risk ahead. This week has been less than thrilling, with the buyers unwilling to follow through on last week’s jolt. The bearish case is starting to crumble under the weight of the bullish case though. Its vertical and horizontal integrations appear to be working.