The Top 7 Marijuana Stocks to Buy for January

Marijuana stock investors must’ve felt hard done by the U.S. election results a couple of months ago. Although, the Democrats won, investors would’ve loved to see a larger blue wave. However, marijuana legalization measures are in full swing, and those on the ballet have all been passed. The states where these laws were passed include Arizona, Mississippi, Montana, New Jersey and South Dakota. This significantly increases the outreach of cannabis producers. Overall, 2020 was a significant year for marijuana stocks. It was a year where the industry has made significant strides in gaining wider acceptance.

But where might the industry be headed in 2021? And which pot stocks should stand out the most in the new year?

While 2020 was a solid year for the industry, not all marijuana stocks had an easy ride. Many of the industry’s bigwigs are focusing on investing in equipment and have therefore posted sizeable losses. The economic slowdown caused by the novel coronavirus pandemic has also affected the industry. However, 2021 will likely lead to a reversal of fortune for many companies within this space.

With that in mind, let’s look at seven of the best marijuana stocks to buy in January: 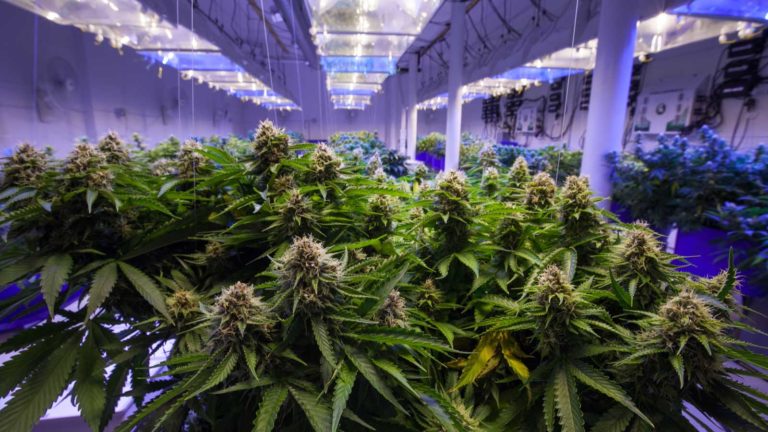 Aphria is Canada’s top cannabis producer which provides cannabis for medical, adult-use, derivatives and extracts to its customers. It has the largest cultivation capacity among the licensed producers of marijuana in Canada. Additionally, APHA stock has been one of the more resilient stocks in the industry, growing 74.4% in the past year.

From an earnings standpoint, 2020 was nothing short of stellar for the company. It witnessed double-digit growth in revenues in the past three quarters, despite a slowdown due to the pandemic. One of the great things about the company is that it has a positive EBITDA and a robust balance sheet which provides it immense financial flexibility. It will be merging with one of its peers — Tilray (NASDAQ:TLRY) — to form the largest marijuana company globally in terms of revenues. Moreover, based on forward sales estimates, it’s one of the cheaper stocks in the sector, further adding to its attractiveness.

Chicago-based Green Thumb Industries produces and distributes a wide range of cannabis products for adult and medical use in the U.S. It operates 49 retail stores and has licenses for 96 locations across 12 different U.S. markets. Green Thumb is another success story in the cannabis world. In fact, GTBIF stock has grown 194.6% in the past year.

Last year was remarkable for the company. Specifically, Green Thumb experienced triple-digit growth in revenues in 2020. In the third quarter, its revenues rose 31% sequentially, driven by organic growth from its Pennsylvania and Illinois customers. It also boasts a sizeable EBITDA, a lot of which is down to its robust revenue growth. It has built a sizeable portfolio of licenses and it has acquired some of its competition at the best prices. The company plans to expand its capacity in states such as Ohio and Pennsylvania to drive growth in the coming quarters. Hence, it is one of the marijuana stocks with the most potential heading into 2021.

GW Pharmaceuticals is a U.K.-based biopharmaceutical company that leverages its cannabinoid product platform to develop and commercialize novel therapeutics. It is currently the leading cannabinoid-based medicines provider in the world. GWPH stock has been resilient in the face of the pandemic, having generated 24% returns in the past year.

GWPH is a pioneer in the production of medicinal use CBD drugs. Its flagship CBD-based drug called Epidiolex treats rare forms of childhood epilepsy and tuberous sclerosis. Additionally, it has a diverse product pipeline that should drive growth later this year. Its earnings performance was solid in 2020, with a massive increase in revenues every quarter.

Things have slowed down since the second quarter, but it has done relatively well despite the pandemic-induced slowdown. Revenues in its most recent quarter grew 51% year over year. With a 5-year average growth rate of 149%, it is currently one of the hottest marijuana stocks on the market.

Trulieve is a U.S.-based vertically integrated medical cannabis company. It produces its cannabis products and distributes them in its 73 operational dispensaries. TCNNF stock is the best performing marijuana stock in the market, with a 251% increase in its share price.

The company has been one of the most consistent performers in the sector, with a 20% average revenue growth and 50% EBITDA margin in the last two years. It has had an incredible 2020 with triple-digit growth in revenues on average in the past three quarters. Its third-quarter posted revenues of $136.3 million, which represents growth of 92.7% year over year. It is benefitting from its substantial presence in Florida, one of the largest markets for medical cannabis in the country. Moreover, based on forward estimates, it is relatively undervalued based on its growth rates.

Tobacco-giant Altria Group is known for its world-famous Marlboro cigarette brand and produces other related products under its subsidiaries. It entered the cannabis market, with a $1.8 billion investment in the Canadian cannabinoid company, Cronos Group (NASDAQ:CRON) in 2019. Since then it has filed for two patent applications for vaporizers designed for cannabis. With a wealth of big tobacco experience, MO stock could become an excellent marijuana play in the future.

Last year was tough on the company. Pandemic conditions lead to a substantial slowdown in revenue growth. However, it seems that Altria is clawing back with a 4.9% increase in revenues. Its earnings per share have been a bright spot, as the figure consistently beat estimates in the previous three quarters. Another differentiator for the company is its stellar dividend yield of 8.3%. With a more positive business environment in 2021, I expect Altria to make significant movements in the marijuana industry.

Chicago-based Cresco Labs is a medical marijuana company that sells various cannabis products under its subsidiaries. It operates 22 dispensaries in the U.S., selling fruit chews, soft gels, live concentrates, pre-rolls and others. Its operating model focuses on retail and wholesale segments, a combination that has been fruitful for the company so far. Furthermore, CRLBF stock did extremely last year, generating 74% returns.

The explosive growth in Cresco comes from its strong performance in key markets like California, Illinois and Pennsylvania. Its focus on wholesale and branding has helped it scale its business and produce strong margins. In its most recent quarter, revenues increased 323% year over year, comfortably beating analyst estimates. It is also narrowing down its losses with its spectacular revenue growth.

With a forward growth rate of 165%, it is among the market’s top marijuana stocks.

Curaleaf Holdings is a medical and wellness company operating in the U.S. It has a unique business model that offers business-to-business services in the marijuana space. It also provides several marijuana-based products. It is currently the largest marijuana company in the world based on its revenues. CULRF stock also outperformed the broader market, having grown 137% in the past year.

Revenue expansion for the company has been stellar in the past three quarters. Sales grew by triple-digits, and beat analyst estimates by comfortable margins. Similarly, EPS grew by a fair margin last year.

The company has been capitalizing on medical cannabis states where markets are maturing at a healthy pace. The company is also increasing its capacity by entering new markets such as New Jersey to cement its positioning. It will also expected to generate the largest profits out of all marijuana companies by 2022. All of these elements make it one of the more solid investments in the sector.