The buzz is largely gone. And today’s situation END_OF_DOCUMENT_TOKEN_TO_BE_REPLACED

Psychedelics could be a game-changer for millions struggling END_OF_DOCUMENT_TOKEN_TO_BE_REPLACED

The Strange Disconnect Between Energy Stocks And Oil Prices

My mother used to tell me quite frequently that to assume makes an ass out of u and me. That is generally true, but investors always work on assumptions. In the energy sector, the most common of those is that energy stocks follow the price of oil. Without a significant rise in oil prices, conventional wisdom says, there will be no recovery in energy. Could it be, though, that that logical assumption is wrong, and we are about to see a period when energy stocks move higher, independent of oil prices? 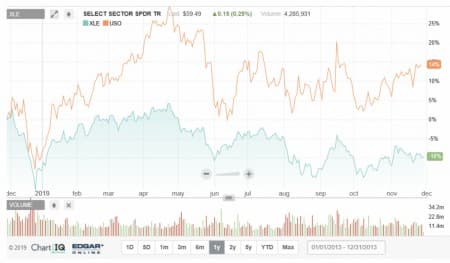 At first glance, the chart above, which shows the energy stock ETF (XLE), marked in green versus the WTI futures ETF (USO), marked in orange, would seem to confirm the immediate, direct relationship between the two. Take a closer look around the beginning of June though. What you will see is that energy stocks bottomed out on May 31st, a couple of weeks before WTI turned positive. In that case, positive sounding news on trade and interest rates caused stocks generally to bounce, dragging the energy sector with them, even though the more skeptical oil market continued lower.

Of course, one swallow doth not a summer make, as the bard once said, but that anomaly does show that if conditions are right, oil stocks can show gains, even if oil prices are falling. I don’t necessarily think that oil prices are going to fall in any dramatic fashion over the next few months, but then neither do I think they are about to roar higher. Since that action in June, oil prices have been basically range-bound, and that is unlikely to change soon.

What could change, though, is how energy stocks move in the context of steady oil. There is good chance that oil stocks will move higher soon, regardless of what happens in WTI future. There are two main reasons for that.

Firstly, with the broad U.S. stock market at record highs, investors will be looking for value as the year draws to a close, and value is now a scarce commodity. Even financials, the other S&P 500 sector that lagged the index for quite a while has now begun to catch up, leaving energy as the lone standout with much lower than average P/Es.

Those low multiples have also led to high yields. XLE currently yields 3.7%, well above the roughly 2.75% available from 10-Year U.S. Treasuries. There is a general feeling among Wall Street analysts that while stocks could continue higher from here, the move up will be a steady grind, which would bring yield into focus and make energy an attractive proposition.

The other factor is that, as you can see from the chart, over the last year, energy stocks have dropped in relation to the price of oil. However, if you stretch that same chart out to a 5-year period, you can see that the opposite is true. Stocks have outperformed the price of oil quite significantly. 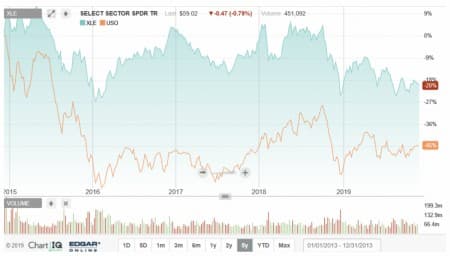 As a rule, longer term trends are a more reliable indicator of the natural order of things than short-term, and in this case, there are good reasons why that would be so. The aforementioned yield is a factor, as is the fact that energy companies have shown a remarkable ability to adapt to lower prices and remain profitable.  It is therefore only logical to assume that that performance gap between WTI and energy stocks will close at some point before too long.

That and the rare low P/Es in the sector make it likely that oil and energy stocks will recover over the next couple pf months, even if oil doesn’t show any significant gains. Maybe my mother was right after all…