The Stock Market Needs Earnings Growth To Rise In 2020

The stock market has had a banner year in 2019 with the Dow 30 Industrials increasing 22%, the S&P 500 up 29% and the NASDAQ up 35%. All of this has been due to valuations increasing since earnings have essentially been flat for the year.

Markets are close to peak valuations

The stock market and valuations have climbed this year on the back of the Fed reversing course by cutting interest rates three times this year and increasing its balance sheet. With Fed policy already being very accommodative, it is unlikely the market will get another valuation boost from it again, and stocks will need companies to grow their revenue and earnings to create significant growth in their shares. 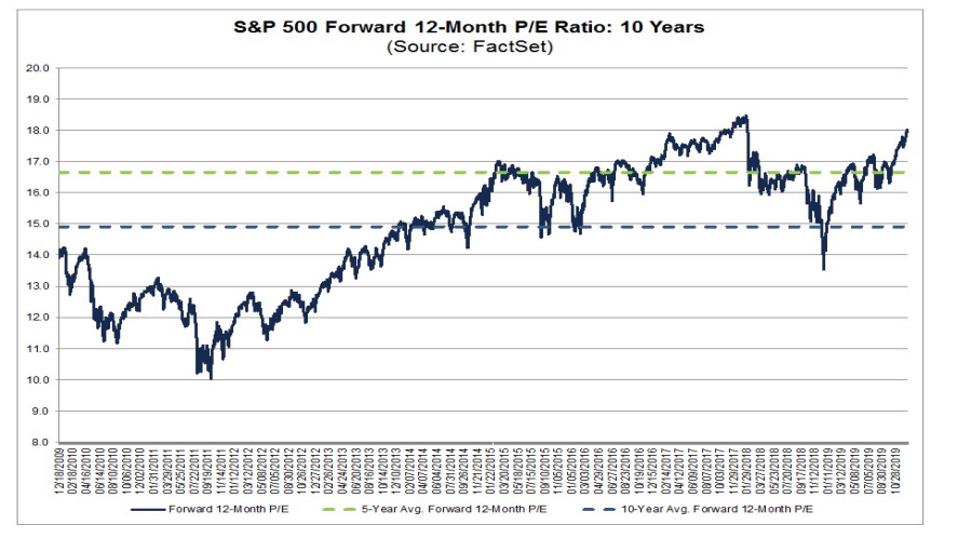 It isn’t a surprise that earnings growth should outpace revenue growth due to a larger amount of revenue being spread over a company’s fixed cost creating earnings leverage. The chart below shows that from 2014 to 2018 this occurred four out of the five years, will not happen in 2019 but is expected to rebound in 2020. 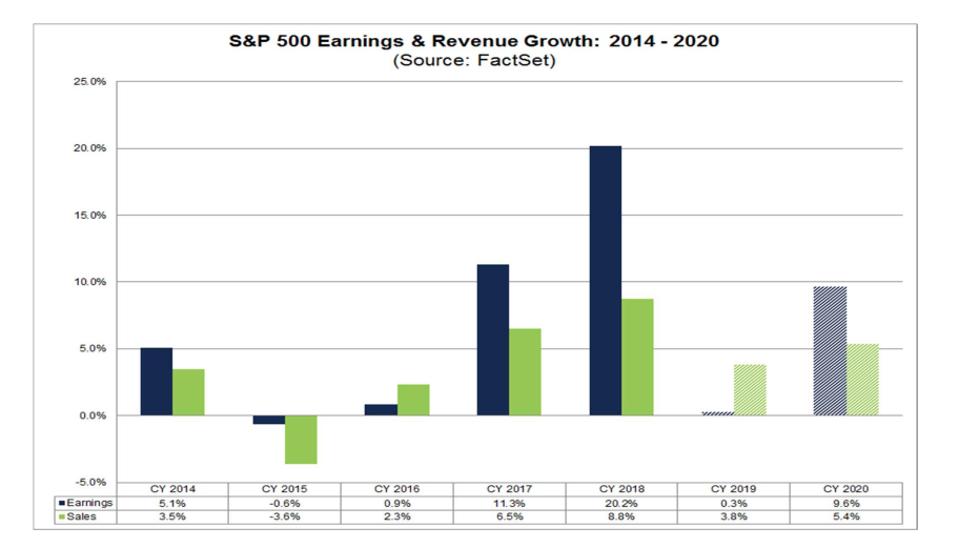 This equation becomes disrupted when revenue declines, which is unusual, or when margins are high and come under pressure. An example of the latter occurred this year when the S&P 500’s revenue grew almost 4% but earnings look to be flat for the year. This was due to net profit margins falling year-over-year for at least the first three quarters. 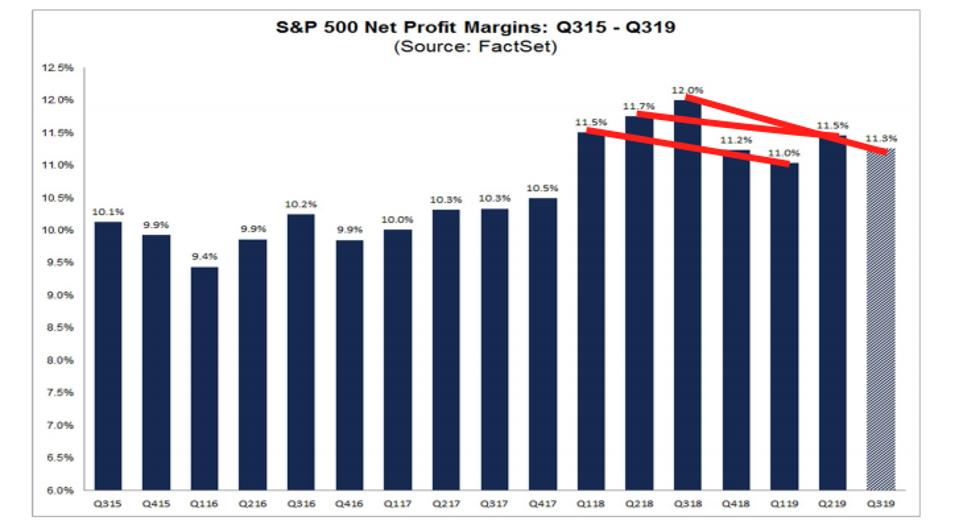 Margins will have to rebound after falling in 2019

As the first chart below shows, the S&P 500’s earnings took a big jump up in 2018 when President Trump’s tax law went into effect. Earnings stalled in 2019 but are projected to grow almost 10% in 2020 on revenue growth of just over 5%. 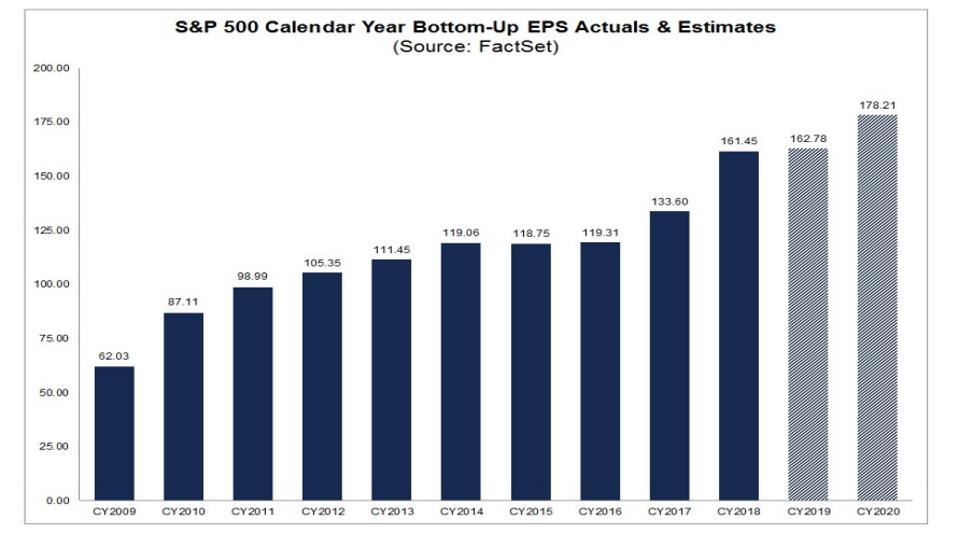 For this to happen margins will have to increase over 2019’s level. As the chart from above on margins shows, while 2019’s net margins look to be lower than 2018’s in the first half of this year and should be for the third quarter, they are still above net margins from the third quarter of 2015 to the fourth quarter of 2017. It would not be surprising to see additional margin pressure in 2020. This would put analysts current earnings estimates at risk of being cut.

The following chart shows the increases in quarterly earnings needed for the S&P 500 to generate $178.24 for the year. They are backend loaded, which makes them susceptible to being lowered as the year progresses. With the Index already trading at an 18.1x PE multiple, it creates a low margin of error environment for stock prices. 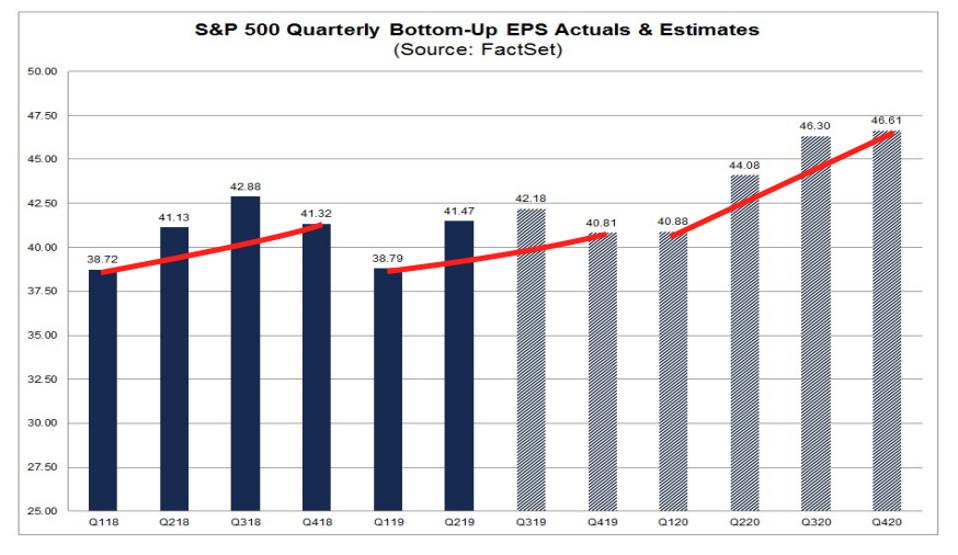