The Easy VIX: We Saw This Breakout Coming And Here’s Why

I've been steadfastly bullish since the end of August and I'm particularly pleased with the quality of the metrics I follow given all the intervening nonsense about impeachment, inverted yield curves, the Fed, trade wars, and of course the "imminent recession." I'll get to those metrics in a bit, but first I need to close the loop on a recent article I wrote about trading fallacies.

On October 27th I published a Seeking Alpha article discussing, among other things, how traders embrace flawed strategies based on recent history, assuming patterns will repeat themselves. A typical assertion would be "I sell when VIX has a 12 handle and buy when it has a 20 handle." For that article I tested various VIX boundary values using my reference basket of 5 broad-based ETFs, and all VIX pairings performed worse than a buy-and-hold approach. This quote from the article reflects a typical observation.

To be clear, the VIX-boundary strategy would sell stocks at low spot-VIX values and buy them back at high spot-VIX values. The theory argued by proponents is that low values indicate complacency because markets have rallied beyond some reasonable barrier. High spot-VIX values would be said to indicate an unreasonable level of fear, so a buy would be in order. I say "spot" because spot values are typically very different from VIX futures quotes, which when analyzed properly, hold great value as trading tools. More on that later.

While the long-term study indicated poor performance for the spot-VIX strategy, I'm sure some readers felt that things had changed over the years, and the current market had well-established patterns that were exploitable. In other words, they didn't buy my argument. But as luck would have it, we've had a real-time experiment underway since October 25th.

On October 25th the VIX closed at 12.65, a 12 handle. Since then, over the subsequent 16 days there have been 11 such VIX closing values with 12 handles - many sell opportunities for a flawed strategy. 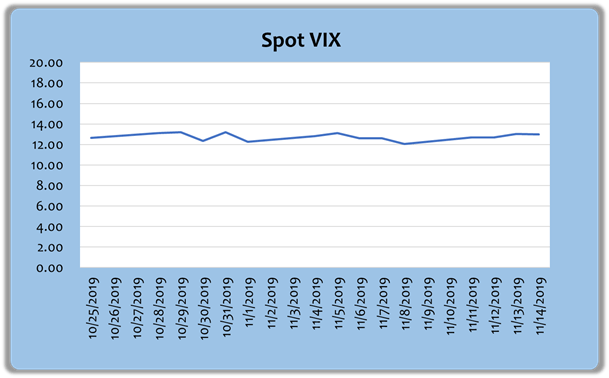 Meanwhile, the S&P is up 3.4%, a serious rally over three weeks. So, if a trader had sold on seeing that 12 handle, it would have been unfortunate given the strength of the ongoing rally.

Rather than selling on a static VIX value, let's look at how VIX futures traders viewed the recent three weeks. VIX futures contracts trade for numerous forward months (VIX term structure) and VIX futures traders are, by necessity, more sophisticated than the average bear; we'll look at the first four futures contracts to assess their risk appetite. But first let me share a few words about implications of the VIX term structure. Consider the following graph. It shows the VIX term structure for three time frames: the average for the last year, December 24, 2018 during the last correction, and November 15, 2018. 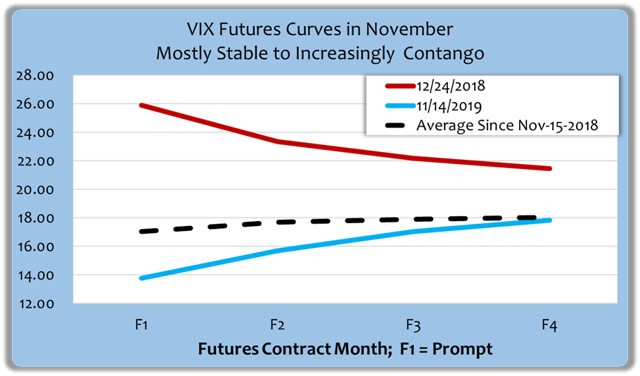 The backwardated shape (early-month contract premiums) of last December's curve is indicative of a high‑risk condition for equities. It was in the midst of the December correction. The contango shape (early-contract discounts) of this week's shape is indicative of low-risk, and in fact stocks have done very well for the last two months. The average is just that.

Bringing that structure forward to current metrics, here is a plot of the change in the VIX curves since October 25th when spot VIX hit the 12s; it's a risk-on market and the graphic shows it. 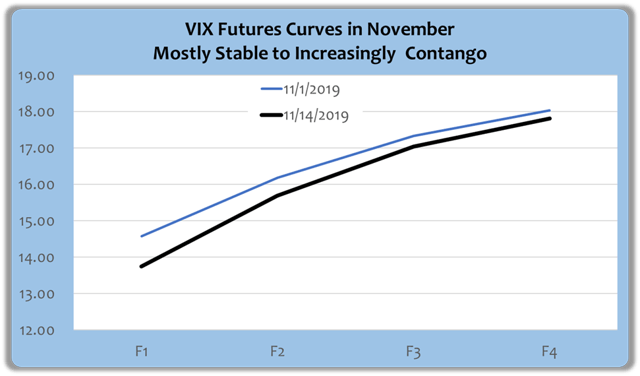 If I plotted the intervening days, it would make such a tight cluster as to render lines indistinguishable from one another. The shapes show no sign of the uneasiness that might have been felt if low spot-VIX values concerned you.

But the story doesn't end with the futures curves. Look back to the backwardated December 24th curve (two charts up). If the December 24th curve represents the bottom of the correction, how could we know on a timely basis that markets were about to turn up? To make an assessment we'd need two things - a metric that measures the shape of the futures curve and another metric as to the direction and rate of change in that shape. Rather than wait for the curve to turn more positive, measuring the rate of change will provide an early clue.

The shape metric ("SHAPE") can be quantified by measuring the average discount from contract month 1 to 2, and 2 to 3, etc. Discounts will be represented as positives because they correspond to positive market environments. Once the SHAPE is quantified, we can put the data into a time series and measure the direction and rate of change as a linear slope.

Skeptics will say "why not simply do the same thing with a price series?" Because most price signals rely on moving averages in order to smooth an otherwise discontinuous time series, and by the time a moving average signals trouble, losses have already become serious. Price-only methods that do not rely on smoothing, rely instead on the assumption that history will repeat itself, and it doesn't. Picking points of price resistance and support is no better than picking spot-VIX resistance and support. In the earlier discussion I pointed out how a focus on VIX price points would have missed this rally; I wonder how many traders missed the recent breakout because prospective new index highs were interpreted as potential resistance.

In contrast, the SHAPE metric I described earlier provides early warnings without smoothing. And when slope metrics are added the Easy VIX algorithm can identify risk-off intervals as they emerge. I want to be clear that the SHAPE metric itself provides only a fraction of the algorithm's power, but the following graphic is worth inspecting as a building block in understanding the method. 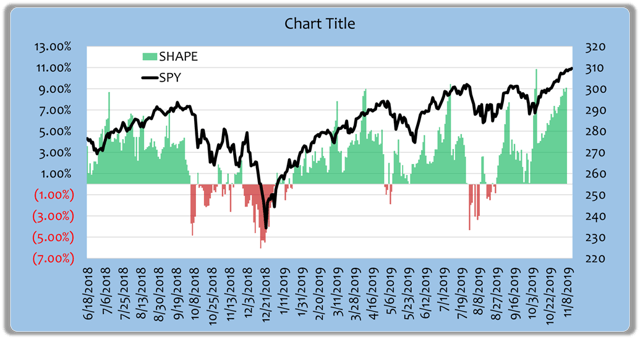 Your eye will naturally focus on the red negative values, but the action triggers are more complicated than that. Ultimately, the Easy VIX algorithm adds other parameters and calibrates them using an artificial intelligence routine. It uses two slopes of the SHAPE with different look-back periods, and action triggers are influenced by observed volatility, the second derivative of SHAPE, and a few other factors which have a causative relationship to trigger sensitivities. The targeted parameters are fed into the AI routine, which calibrates parameters for today's decision based only on data available through yesterday, unlike some decision tools that are artificially optimized using hindsight via curve fitting.

Here is a graph of the Easy VIX signals since September 2018 plotted against the S&P. I use S&P here for simplicity, but I trade a reference ETF basket of SPY, DIA, QQQ, IWM, and SSO. I chose late September 2018 because most of us think of the 2018 correction as a December event, but the algorithm actually identified the start of it in early October of 2018. 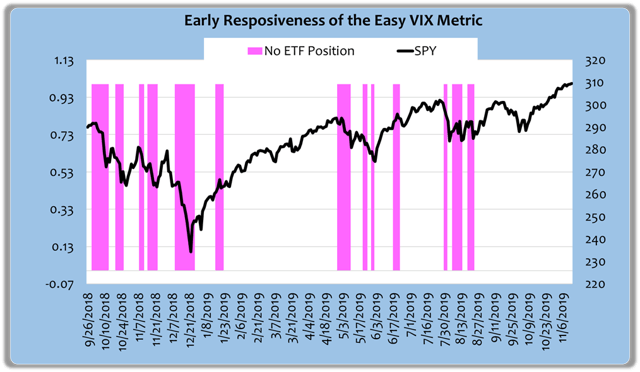 A couple of things are worth noting on this graphic. Obviously, most of the big downturns were caught by the algorithm, many of them early. There are a few false signals like the one in the second half of January 2019. That one lasted 5 days before a reentry and cost 1.8% compared to holding. Yet when looking at the full period for the reference ETFs, the algorithm outperformed a hold strategy by ten percentage points; i.e., 17.18% vs. 7.20% gains.

Another detail... you could say the methodology missed a downturn in late September and early October of 2019, but if you look closely the worst of that was in the first few days of October and Easy VIX metrics hardly flinched at the time. So, I called it a bear trap in a blog post and stocks have climbed ever since. I count that as a victory because the downdraft was so steep and short-lived that any decision to sell would have been late and unfortunate. Sometimes a simple "hold" signal is a very valuable commodity.

But back to why I saw the breakout coming. Here is a graph of that SHAPE metric since October 1st. You can't find a single negative (backwardated) value or any sustained downward sloping trend. It's steadfastly bullish but for an anomalous day or two. 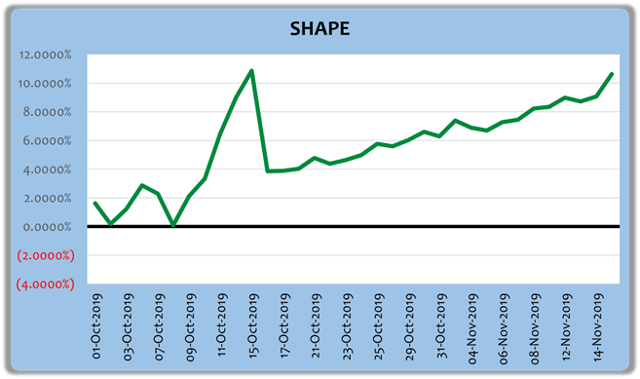 Members of my Easy VIX Marketplace service also see the Slope metrics and gain other insights. When the next downturn comes along, they'll see that too.

If you're following a simple strategy of picking price points or VIX boundaries or worse, trying to time markets based on fundamentals or news headlines, you're probably leaving serious money on the table. Very sophisticated traders are leaving breadcrumbs to follow all the time; those breadcrumbs are displayed as the VIX futures curves and how they change. It's a bit complicated, but if you decode those signals, the emergence of risk-off and risk-on intervals becomes apparent. And that's worth something. If you manage a material nest egg, it could be worth something big.