The 3 Biggest Reasons to Buy Pinterest Stock on Weakness

Social media company Pinterest (NYSE:PINS) hit the public markets in April 2019 at a price tag of $19 per share. The IPO was a huge success. Pinterest stock rose nearly 30% in its first day of trading. That success largely continued into late August, as PINS stock rallied another 50% to $37.

But Pinterest stock has fallen on tough times recently. Since late August, PINS stock has dropped 20%.

The decline wasn’t triggered by Pinterest itself.  Instead, the culprit was rising interest rates. The valuations of high-flying, momentum, growth stocks like PINS are pressured by higher interest rates.

Consequently, over the past few weeks, as rates have climbed,  we’ve seen a huge shift from momentum stocks to value stocks.  As a result of this trend, Pinterest stock has fallen alongside its momentum peers.

The good news is that this shift from momentum stocks to value stocks appears to be coming to a close, as interest rates have stopped skyrocketing higher. On top of that, the fundamentals underlying Pinterest stock remain as favorable as ever. Moreover, the technicals of PINS stock imply that the stock has reached a bottom.

In light of all of those points, investors should buy the dip of Pinterest stock. The worst appears to be over for PINS, and its fundamentals indicate that the shares can rise meaningfully over the next few quarters.

The  Shift to Value Stocks Is Probably Over

The first main reason to buy Pinterest stock on weakness is because the dynamic that caused the stock’s recent weakness – a big shift out of momentum stocks and into value stocks – appears to be coming to a close.

From Sept. 13 to Sept. 18, though, everything has reversed course. Long-term rates have fallen meaningfully, while the Value Factor ETF dropped and the Momentum Factor ETF rose. PINS stock rallied along with most other momentum names.

In other words, the shift from momentum stocks to value stocks  appears to be over. The shift probably won’t reappear in the foreseeable future. That’s because the driver of the big shift was a huge surge in long-term interest rates, based on the idea that the global economic outlook is improving. Although the global economy is rebounding,  inflation in the U.S. remains stubbornly below 2%, central banks everywhere are cutting interest  rates, and the trade war has not yet been resolved.

As a result, bond yields probably won’t move significantly higher anytime soon. If yields stay low, momentum stocks will come back into favor. As that occurs, Pinterest stock should rebound.

The second main reason to buy Pinterest stock on weakness is because its fundamentals are rock-solid, leaving PINS well-positioned to hit $35 over the next few quarters.

Pinterest is a large, unique digital media platform which has very little usage overlap with other social media platforms. That is, 300 million consumers worldwide log on to Pinterest every month to look at innovative photos and get inspiration for their projects.

They can’t do those things on Facebook (NASDAQ:FB), Twitter (NYSE:TWTR), Snap (NYSE:SNAP), or Instagram. As a result, Pinterest won’t lose many users. Instead, it should keep growing at a healthy pace as the company expands more meaningfully into international markets.

At the same time, PINS is in the early days of starting its ad business. The very things which consumers use Pinterest for – discovering new products and places, and getting inspiration for new projects – are very conducive to ads.  PINS should have no problem selling ads, since its ads will attract many clicks and views because they fit naturally into  the platform.

Long story short, Pinterest’s user and revenue growth over the next several years looks poised to be robust. That robust growth will come on top of the company’s 70%-plus gross margins, while its operating spending should fall meaningfully as a percentage of its revenue as its top line increases.

Given these points, I think Pinterest’s earnings per share can reach $2.75  by fiscal 2025. If that EPS forecast proves accurate and PINS’ forward multiple reaches 20,  Pinterest stock will reach $55 in calendar 2024. Discounted back by 10% per year, that equates to a 2019 price target of roughly $35.

The Technicals Imply That the Worst Is Over 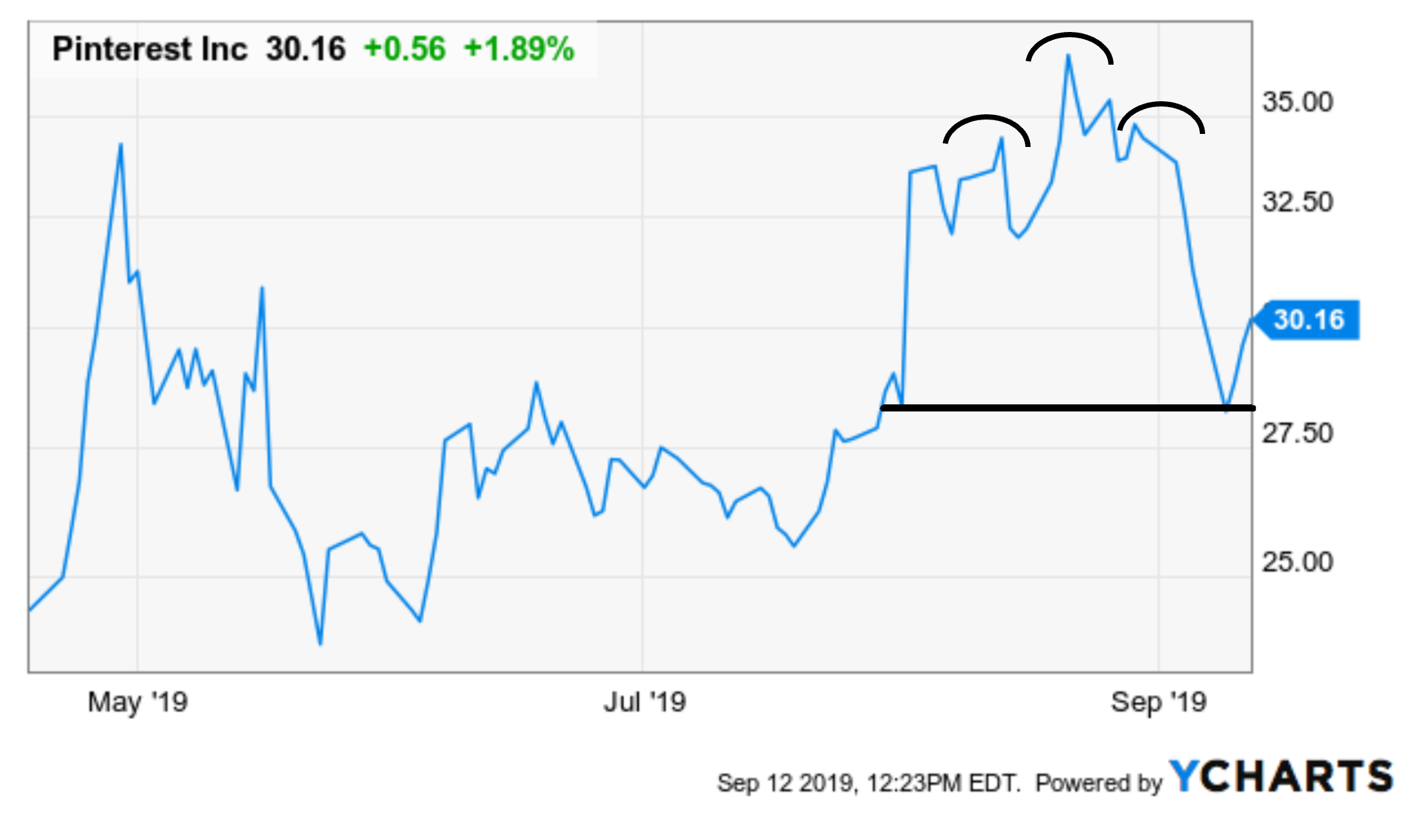 As a result, it’s clear that the stock’s bearish formation has run its course.

The Bottom Line on PINS Stock

Pinterest stock is a long-term winner that went through a rough patch over the past few weeks because of macro issues. That rough patch now appears to be in the rear-view mirror, and the stock is undervalued.

So now is the time to buy Pinterest stock on weakness.