Tetra Bio Pharma (OTCQB:TBPMF) is one of the first companies in the marijuana industry to study the potential effects of analgesia with cannabinoids. Currently, TBMPF's leading clinical trials involves CAUMZ and QIXLEEF (9.5% Dry Pellet THC, 2.5% CBD, administered via inhalation) for the adjunctive treatment of pain (along with opioids) in advanced stage cancer patients and in an non-inferiority study for analgesia against fentanyl. Fortunately, there exists ample clinical evidence supporting the use of nabiximols for pain relief, leading to a high probability the company may succeed in its clinical trials due for topline results at the end of this year. Moreover, if successful, patients cannot simply mix and match cannabis strains to mimic the company's formulation as there are over 400 chemical entities in loose leaf cannabis while nabiximols contain an industrially purified formulation of 9 cannabinoids. Without further ado, let's take a look as to why the company will be assigned a strong buy rating. 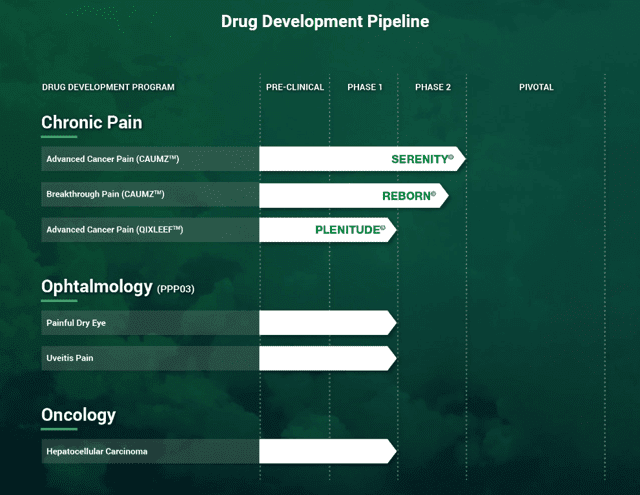 The Bear Case For Cannabinoid and Pain Relief

Before making any investment decisions, it is important to understand why individuals may not want to buy the stock rather than the opposite. Hence the bearish thesis for why TBPMF may fail its clinical investigation will be laid out first.

In randomized controlled trials involving cancer patients using cannabinoids for pain relief, it was found there was a 30% reduction from baseline pain vs. a 23% reduction in controlled arms. However, only 43% of patients in the treatment arm reported reductions, and if evaluated all together, this would mean the trials did not meet statistical significance for analgesia.

This is highly concerning since advanced stage cancer patients, by definition, have limited treatment options and as a result often experience significant pain. Hence, it is unclear how drugs such as CAUMZ or QIXLEEF can assist with improving patients' quality of life when 60% of such patients need effective analgesics to relive their crippling pain conditions.

Moreover, cancer patients who took cannabinoids saw alarming rates of adverse events when THC was given at doses of 20 mg or more vs. placebo. Most common AEs observed were fainting, dizziness, and vomiting, which were evident against placebo by a large margin. As a result, skeptics argue even if CAUMZ or QIXLEEF was to show some sort of quality of life improvement in cancer patients against placebo, high incidences of adverse events will likely hamper the drug's risk reward profile.

The key claims laid out in the bear case involves the futility of using THC for pain relief when clinical data has not validated such thesis. The key flaw in their argument, however, derives from the fact CAUMZ and QIXLEEF are not solely composed of THC, but instead exists as a nabiximol (formulation of both THC and CBD). This changes the game entirely, as there is already an approved drug manufactured by GW Pharmaceuticals (GWPH) which independently validate the clinical studies for CAUMZ/QIXLEEF. 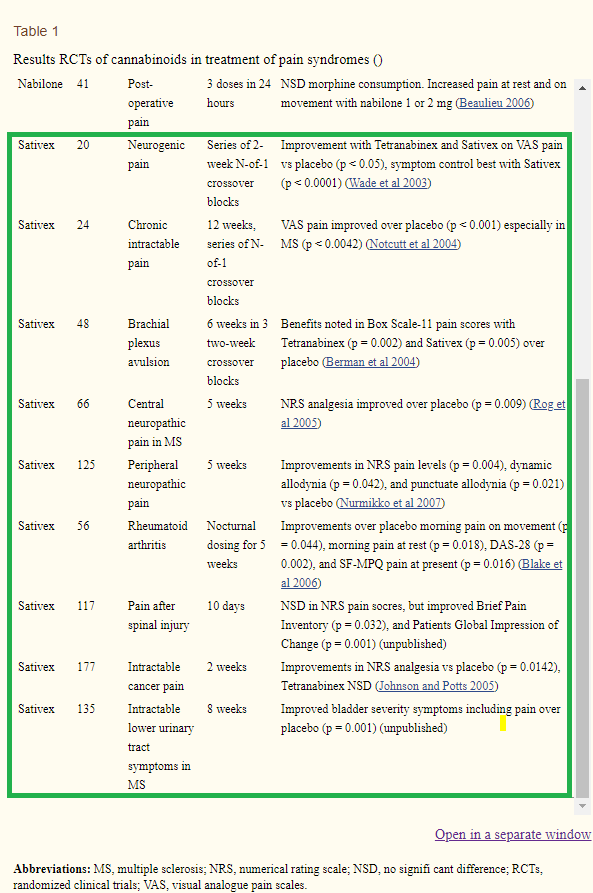 As shown above, GWPH's Sativex, a nabiximol, was able to achieve statistical significance in its endpoints for pain relief in every single one of its conditions being investigated (p value between 0.001 and 0.05). Moreover, in a trial of 177 patients with intractable cancer pain, Sativex achieved significant improvements in NRS analgesia with astonishing statistical significance (p = 0.0142). Since the active pharmaceutical ingredient for CAUMZ/QIXLEEF is the same as Sativex, it is extremely likely CAUMZ/QIXLEEF will be able to meet its primary endpoints for pain relief in its SERENITY and PLENITUDE trials.

At this point, avid readers may point to a confirmation trial for Sativex's efficacy in cancer patients' pain relief which failed to meet its primary endpoints. This trial, however, did not control for the key variable of opioid dosage as both Sativex and CAUMZ/QIXLEEF are being investigated as adjunctive therapies. Patients in the old trial which validated Sativex were being administered up to 271 mg morphine/day while patients in the new trial only took an avg of ~180 mg morphine/day. Considering the new trial was inches away from meeting statistical significance (p between 0.04 to 0.08), this can largely be explained by the -33% less morphine patients took as the drug has a direct impact on study outcome. Hence, it should not be a surprise the confirmation study failed due to poor control of variables. Luckily, all of CAUMZ/QIXLEEF's trial sites involve dosing patients at North American centers, where the level of morphine administered for cancer patients is much higher compared to international subjects in Sativex's confirmation trial. 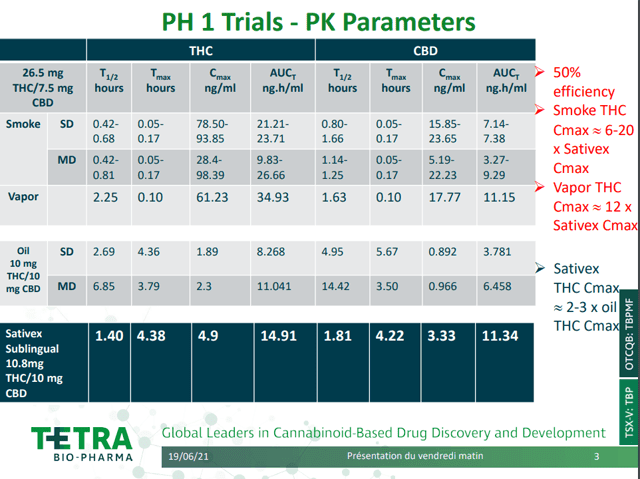 Furthermore, the pharmacokinetic parameters of Sativex are shown to be inferior than that of vaped/smoked nabiximols. The results are astonishing, inhaled nabiximols bested Sativex by a margin of 6-20x in terms of maximum concentration (Cmax) and a margin of 2x in terms of maximum absorption (AUC) when analyzed all together. While bears may point to a dose of THC >20 mg leading to higher prevalence of serious adverse events, it is not difficult to optimize a therapeutic window given the dose-proportionality response existing for nabiximols. As its kinetics is several times more potent than to Sativex due to its method of delivery, both CAUMZ and QIXLEEF are extremely likely to best Sativex in terms of analgesia. This is further supported by the three drugs possessing the same active pharmaceutical ingredients and as a result, share a common mechanism of action.

Since SERENITY evaluates CAUMZ for improvements in quality of life in advanced stage cancer patients, and over 60% of cancer patients claim untraceable pain as the greatest barrier to a good QoL, it is very likely the SERENITY trial will succeed due to the clinical evidence presented above. Moreover, studies have shown cancer patients taking THC or CBD saw adverse event rates of 85% compared to 75% for dummy, which is consistent with the adverse event profile for CAUMZ presented in Phase 1A and 1B (~10% more vs. placebo). As readers can see, while nabiximols lead to treatment related AEs, the risk isn't really significant when evaluated in context of the superb analgesic potential patients are receiving. Moreover, all types of cancer therapies (chemo, immuno, radio, surgery, etc.) cause treatment related AEs, and the fact THC+CBD only leads to mild ones such as dizziness or fatigue speaks greatly in favor of its overall safety profile.

The same safety and efficacy analysis presented above for the trial SERENITY also applies to PLENITUDE trial, as the latter directly evaluates the reduction of pain in cancer patients with QIXLEEF. In terms of analgesia, clinical research has already placed marijuana in between opioids and mild analgesics such as ibuprofen. However, the REBORN trial was designed with 2 control groups, the first being placebo and the second being fentanyl. Considering fentanyl is able to demonstrate massive pain relief in a very short duration of time, the author believes TBPMF may be overly ambitious investigating CAUMZ in a non-inferiority trial and expects it to fail this leg of the study.

Discussion of Financials and Market Opportunity

Although operating at a net loss of ~$13 M CAD per annum, TBPMF has announced an 15M CAD equity offering just last month. Once the deal closes, the company will have enough assets to run its R&D program for a full year without further dilution to shareholders. Furthermore, all of the company's Phase 2 trials are expected to announce topline data by the end of the year (or in Jan 2021), serving as a significant bullish catalyst for a company with ample science backing its clinical trials. Combined, the global pain relief market is estimated to reach $29.4 B USD in 2026. Considering GWPH is now a multi-billion dollar company due to successes in nabiximol based drugs (Sativex and Epidolex), TBPMF's market cap of $120 M CAD (with no debt) may be undervalued.

With ample evidence supporting the effects of nabiximols for analgesia in cancer patients; enough assets to cover R&D expenses until the end of the year, and top-line results from two clinical trials in the coming months, investors looking for medical exposure should consider TBPMF as a lucrative long idea with booming catalysts. While the company has ample upside, it is important to note the occurrence of serious adverse events in patients taking nabiximols/cannabinoids may point to an unfavorable risk reward profile. In addition, a non-inferiority study for CAUMZ against fentanyl is likely overly ambitious due to the latter's acute and significant pain relief when delivered. In all, the author estimates a 75% chance TBPMF will succeed in its SERENITY and placebo leg of its PLENITUDE trial, with shares likely tripling in this scenario, and falling by three quarters should the trials fail. In the end, a highly positive expected value results in a strong buy rating for the stock.