As you know we've been very bullish on Tesla (NASDAQ:TSLA). What's amazing that while normally bulls hop on when stocks jump, here, if anything, bears are picking up as the stock goes up. Bubble calls and a lack of understanding what drives stocks is creating a huge contrarian bullish call.

I wasn't shy to like the stock on the way up. I'm a momentum analyst. It doesn't mean I just like a stock because it's going up. But I do like stocks that go up. But "up" stocks get me to do the earnings work.

I've said several times to subscribers in the last year or so that this story has the potential to be the biggest earnings inflection story of my career. I've been doing this for more than 20 years.

So it's not just the price going up, although that helps. It's the earnings that are about to rocket that are causing this stock to go rocket ship on us.

I don't think people are ready for that.

Before I talk about what I'm excited about I wanted to point out that this is turning into an even bigger bullish contrarian story.

Take A Look At This, More Bears As The Price Goes Up

Usually when people get bearish it's because a price of a particular security is dropping. That's pretty normal and not as telling as a contrarian opportunity.

But when you have bears picking up and the price moving up, that's divergence and usually pretty telling that there can be more follow through higher.

Besides bubble calls here's a headline that jumped out at me.

CNBC reported that just 19% of sell-side analysts had a buy rating. The rest of the analysts had holds or sells. They said the number of bulls vs. bears has never been this bearish. We're one of those bulls. In fact, you'll see further on that we're the biggest bull on Tesla along with Tesla's highest ranked sell-side analyst according to Reuters/Refinitiv.

To me that's everybody leaning the wrong way as the stock goes higher.

I'll explain further below why there's something wrong with following sell-side opinions generally.

I'll explain below why the above headline is not correct.

Here's another headline, this time from MarketWatch. There are many. This is a contrarian's dream.

And another from MarketWatch.

It's pretty amazing that the more the stock goes up the more bears there are. It should work the other way. This is a contrarian divergence that's something special. Divergence means bulls should be rising as the stock goes up, not bears.

Plus these reports I believe fail to do the work to understand why Tesla's stock is catapulting. When you do that work you can see that the stock price move is sound.

Analysts Not Doing The Math

If you know my work, you know I'm predicting where earnings can go. Earnings are what drives stock prices. Earnings are in our face but I think so under-followed. You see stocks jumping and dropping big when earnings come out so doesn't it make sense to have a model to help you know what can happen? That's what we're doing.

The hope for earnings is what many investors value companies on.

You match your expected earnings to a P/E.

What's a P/E? Price-to-earnings means what a stock should be valued at. It's a simple cookie-cutter measuring tool. I focus on stocks with earnings so I can get a target based on my earnings multiplied by where I think the P/E can be. In normal cases I use a company's mid-point PE over the last few years.

Tesla is only coming around to earnings so I've been using a 45X PE. I don't think the Street will have a problem paying that for earnings this year or next year.

My PE is not higher because the gross margins are only in the 20s%. That's good for an auto company but not good for a software company with higher P/Es. To deserve a higher PE I need to see higher gross margins.

Again normally I don't have to guess on a PE, but here I do because we're just coming into earnings.

My PE is not lower because the growth rate is much higher than auto companies and the asset and inventory turnover potential is much greater.

That's what's given Amazon a high PE is its fast growth and strong inventory turns.

If an analyst or media commentator says Tesla's a bubble they're likely not doing the earnings math.

But big money doesn't make most of their decisions based on the sell side.

Buy-siders (hedge funds) are the one's that buy the research (thus the name "buy side") and they're the ones actually pushing around stocks by buying and selling.

I've heard more and more that buy siders just pay commissions to sell siders only so they can get access meetings with the companies under coverage. They are not paying commissions for the special coverage by the sell-side analyst or the hopes that the analyst will be right. They just want access to the company.

So if you're following sell siders I don't think that's an optimal strategy. Big money isn't following them.

Big funds have their own internal analysis teams that, guess what, try to figure out where the earnings can go like we do.

Buy side earnings estimates are usually more the out-on-the-limb type.

I remember hearing at one hedge fund an analyst say he was being conservative. The portfolio manager told him we're not paid to be conservative. That meant we're paid have a strong opinion where the stock can go.

Sell siders get in trouble if their earnings are too far from the Street. They aren't paid to go out on a limb. They try to follow a company's guidance and not veer to far. You can't get conviction by listening to a sell sider because what conviction can you get with a 10%-20% upside call. I need 45% minimum 12-month upside.

I remember at one point last year I had a call that Tesla could hit $700-$1,000. One subscriber told me nobody's going to take me seriously with a target like that. I simply said but that's what my work shows.

Sell siders are not going to go out on a limb.

I speak tough on sell-siders but I guess I've become one. My background is from the buy-side so I've turned my "buy-side style" product into a sell-side product. People buy my work. 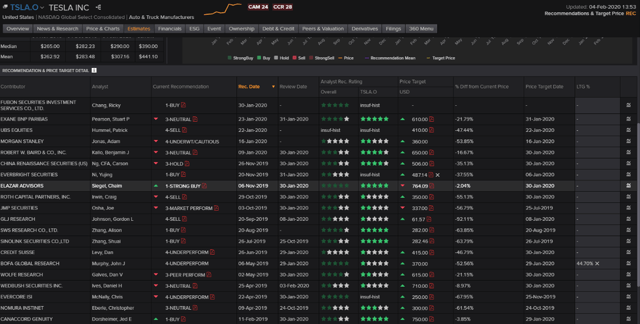 (Note that our price target in the pic above is old and has been raised since this pic. We're still the Street high.)

I think the reason we've done better is because we're not afraid to go out on a limb. It's not a limb really. It's just what the trajectory of history plus a company's plans tell you where earnings can potentially go.

So here we have a strange inefficiency in the market. Many follow sell-siders. The media keeps reporting on sell-siders. But sell-siders, for the most part aren't paid to be correct. Maybe some are but generally not.

The issue is that analysts are not listening to what the company is saying.

That's been the story with this company.

The same thing is going on now.

If you model some comments from Tesla you're going to have higher earnings numbers.

In their recently-released earnings they said,

"After such expansions are done by mid-2020, installed combined Model 3 and Model Y capacity should reach 500,000 units per year."

"We do not expect ASP to change significantly in the near term, which means volume growth and revenue growth should correlate more closely this year."

I think there's more reasons for conviction but if you model on these two simple facts you start getting big EPS for this year. ASPs flat mean gross margins stay steady. As the volume ramps, revenue and gross profit ramp and lever over operating expenses that aren't rising as fast. Credits should also help drive earnings this year.

Having An Earnings Number Drives Conviction

I've found in my 20-year plus career the best way to build conviction is to have a 12-month out EPS number backed by a model with sound logic. Then you lean on that EPS X PE target with conviction. Without conviction how can you hang on?

The ramp in units at a good margin gets me the math in the model to give me that conviction the stock can go much higher.

And Tesla's not slowing down production or new lines. They claim they are getting more efficient at production and can get new lines up faster. That gives visibility that revenues can keep rising. Their costs are not ramping at the same pace which drives EPS leverage. That's what the Street's missing.

I don't think people are ready for someone to turn production on this fast. They've never seen it before but it's happening and that's driving the growth rate.

Tesla is talking about re-ramping China production. The health concerns in China are a real risk. We obviously hope and pray for an end of this outbreak. China is very important to Tesla this year. It's possible that this can create a buying opportunity if the problem persists. If it clears up it can help send the stock higher.

I recently said that Tesla reminds me of Amazon (NASDAQ:AMZN). Amazon did logistics and distribution better than retail and so sent many retailers to zero. Tesla is doing production better and cheaper and can send a lot of auto companies to zero.

But the main thing for me is the earnings progression. That's what bubble calls are missing. And with the bears increasing as the stock goes up, we have an earnings-inflection, contrarian-divergence bullish call in the making.