The entire cannabis industry is reeling from overbuild and oversupply after legalization in Canada. However, during that time, a smaller company has built themselves up to being revenue positive and profitable, a trend I expect to continue. TerrAscend (OTCQX:TRSSF) is growing their revenues by triple digits YoY and maintaining a cash positive position. With the rest of the cannabis industry back on their heels, downsizing, this is a strong position to be in as TerrAscend is now able to move into markets aggressively. While I would love to own this stock seeing it could be a good long-term prospect, I am not certain as to the current price. But, some analysis and further numbers will tell a better picture.

Readers may remember that not only was I once a big proponent of cannabis stocks, I was heavily investing in them. Unfortunately, back in early 2019 while I was traveling through Central and South America, I contracted a virus that took me out for about 18 months. Because of that, all of my holdings were liquidated via my trust. So, I am interested in cannabis stocks once again, but from a far less hyped perspective. Originally, I did well with these stocks, as it turned out. I had even written about TerrAscend just before my illness and near demise; it was my very last article published here on Seeking Alpha before I went down - quite literally; I collapsed on the floor. Interestingly, it is also the very last article that has been published on the stock since then.

A look at TerrAscend's chart shows the company's earnings are starting to push the stock back upwards after the lull the industry has seen over the past 1.5 years: 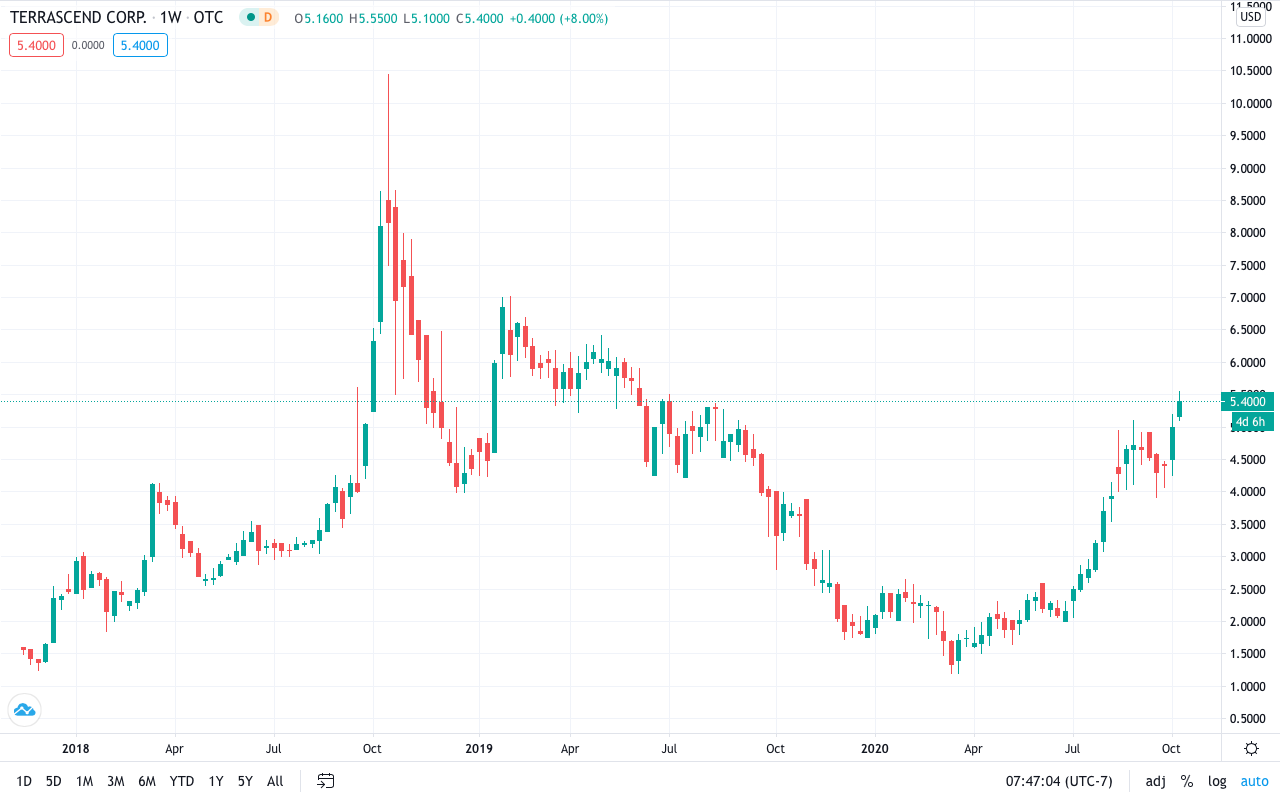 The industry surged initially when legalization passed in Canada. Companies invested heavily in infrastructure for the ability to produce product such as grow houses. And, investors bought heavily into the industry. However, demand for all of the product being produced never materialized at the same levels. Stocks within the industry sold off heavily and, as you can see from the chart above, TerrAscend was part of that selling throughout 2019.

But, as for TerrAscend, that may be an opportunity for investors.

A Look At Their Revenue

Given this pace, the company will be growing rapidly and expanding more. As Jason Ackerman, CEO and Chairman of TerrAscend states in their latest Q2 release:

Moving into the second half of 2020, we look forward to continued strong revenue and profitable growth ...

... TerrAscend anticipates full year net sales of at least $192 million driven by second half 2020 net sales growth of at least 34% versus the first half of 2020 and 109% year over year. Adjusted EBITDA for the year is expected to be at least $45 million.

It is that rapid growth of revenue that is catching my eye. The 34% growth rate is what I am looking at (For H2 2020). With a $45M EBITDA, you are looking at a company that should have a valuation of ~$1.35B (Based upon Shiller P/E ratio). They are currently trading at ~$1B. The thing is, this is a rapidly growing company. With the company's $45M in EBITDA, that is about 20%. Given a continued increase in their revenue with an in-kind profit increase, TerrAscend's capitalization should be much higher. This is a 35% increase in the share value (Currently trading at ~$5.60).

A Brief Look At The Past

Here is one aspect of TerrAscend that I like the most: They outsourced a lot of their initial growth. Instead of building facilities in the hundreds of thousands of square feet like some of their counterparts such as Aurora (OTC:ACB), they became a partner, borrower and customer of Canopy Growth (OTC:CGC) and purchased their flower from them as well as other smaller companies in the industry. This enabled the company to do one thing very well: Focus on their products, getting that product to market and establishing a solid customer base. "Kudos for that", I say. This has paid off well as the results are being seen in the revenue that continues to grow.

Also, the company has made acquisitions its own, purchasing The Apothecarium, a dispensary with multiple locations, and are now using that to expand their operations. By partnering and purchasing ongoing operations, TerrAscend has built themselves a healthy springboard to move forward. Ultimately, this has helped the company maintain their cash position instead of having to deal with SG&A costs that are getting out of control from expanding too rapidly into an industry that failed to produce expected demand.

Ratings say a lot. For those who do not have a subscription to the Seeking Alpha premium services, you are missing out on a great deal of information. And, in this specific situation, with regards to TerrAscend, you can see the progression of the growth in revenue, EPS and stock price movement as the company's score moved higher and higher.

For instance, momentum had this company rated as low as C- just at the beginning of the summer - momentum being defined by price movement. Over the summer, the stock was moving in a much tighter range and even heading slightly lower.

Now that TerrAscend's stock is moving upwards by nearly 280% in the past three months - the stock has since improved in value during that time from ~$2.50 per share to more than doubling to above $5.00 per share - the company's momentum is now rated at A+. As of October 20th, here is the ratings versus just October 6th:

This is the only conundrum I have with the company and its ability to grow and return value to me: I might have missed a really great opportunity just as early as the late part of the summer. Earnings are growing but, value is now dwindling based on the fact that the stock price is moving higher and higher. Still, I could see the company's valuation moving higher by some 35% over the next year's time given their revenue and earnings, as well as a modest valuation multiple. The Shiller Index has the broader market valuation of 31.71 times forward earnings. The 35% increase is a mere 20% from the current price but represents a valuation less than the broader market.

The broader market is nearing all-time highs again. If the broader stock market fails to move higher, it might be a catalyst for a sell-off across the board. This may bring down the stock price for TerrAscend. Given a better price, the Value in the graph above will certainly improve and it may be a buy at that time.

The current value is the real downside risk that I see for the company and a potential investment. I believe the industry will continue to expand and grow. Along with that, revenues for companies will grow and increase. But, as of right now, the stock's price may be on the rich side. There has been a bit of volatility in the markets the past few weeks given the government's inability to pass a new stimulus package as well as concerns over the release of a COVID-19 vaccine.

I still like the cannabis industry and am looking to invest into it with an eye to the long term. I really like TerrAscend's approach and the fact that they did not necessarily get caught up in the hype of the new, budding industry. They grew and they also outsourced growth by purchasing their flower from other companies. They are not sitting around with massive facilities that are not being used, having to pay through SG&A to maintain these facilities. This left them in a far healthier environment and from that, the company is now profitable with continually increasing revenue growth.

The company's stock is moving higher for now. I am bullish on this company but, I am going to wait for a $2.50 - $3.00 stock price before I pull the trigger. The stock very recently traded at these levels from December of last year until July of this year. Since then, the stock has broken out to the upside measurably. As mentioned, the broader market is much higher as a multiplier. However, the cannabis industry is much lower; albeit this is due to the fact that a lot of companies in the cannabis industry are losing money. I may be late to the party on wanting to get such a low multiple and it may be simply impractical.

However, at the same time, the stock was trading at higher levels than this over a year ago. This was when the industry was far from profitable. So, it may be that with the new revenue and profits, the market is still trying to find price discovery from this.

I will keep evaluating the price of the stock over the next three months to see if the stock moves lower from here. I just hope I have not missed the boat on this stock.