Market volatility is up in recent sessions, and END_OF_DOCUMENT_TOKEN_TO_BE_REPLACED

As tech takes a tumble this week, there END_OF_DOCUMENT_TOKEN_TO_BE_REPLACED

So the big question after yesterday is clearly: How exactly do you kill feral hogs, anyway?

More on that later. Monday’s other obsession was the stock market, which got stomped like a grape.

The Dow Jones Industrial Average ​tumbled 767 points, or 2.9%, the largest one-day percentage fall since Christmas Eve. The yield on the 2-year Treasury note, a pretty good proxy for Federal Reserve interest-rate expectations, has dropped 31 basis points over three sessions, the biggest fall over such a span since the financial crisis.

The cause was China letting the U.S. dollar ​rise above 7 yuan, which doesn’t sound like much but was something Beijing had prevented since late 2016.

It’s the trade war between the U.S. and China that is the nagging backdrop for stocks — this time as President Donald Trump raised the prospect of a 10% tariff on $300 billion of Chinese goods next month. His reaction is said to come in frustration over China not buying the U.S. agricultural products it said it would. Oh, and the continued unrest in Hong Kong, which China has taken to blaming on the CIA. So, fun times.

We may well be at the most dangerous financial moment since the 2009 Financial Crisis with current developments between the US and China.

There have been two notable developments since stock markets closed on Monday. One, the Treasury Department called China a currency manipulator, something it refused to do on numerous occasions despite Trump’s tweets over the years. (And, ironically, a decision made the one time China opted not to interfere in markets.) Two, the People’s Bank of China set the daily reference rate for the onshore yuan below 7, a bit stronger than some had expected, which was taken by traders to be a bit of an olive branch.

The call of the day goes to Thomas Lee of Fundstrat Global Advisors, who points out that buying after 3% selloffs has been a profitable strategy. “We believe the trifecta supporting markets [of] 1. Strong U.S. corporate [results]; 2. Overall positive White House policy towards business; and 3. A dovish Fed are a very positive combination for equities. For those who think 2019 is terrible, [they] need to keep in mind 2019 is the BEST YEAR FOR EQUITIES, EVEN SURPASSING YTD RETURNS IN 2009,” he wrote after employing the caps lock key. 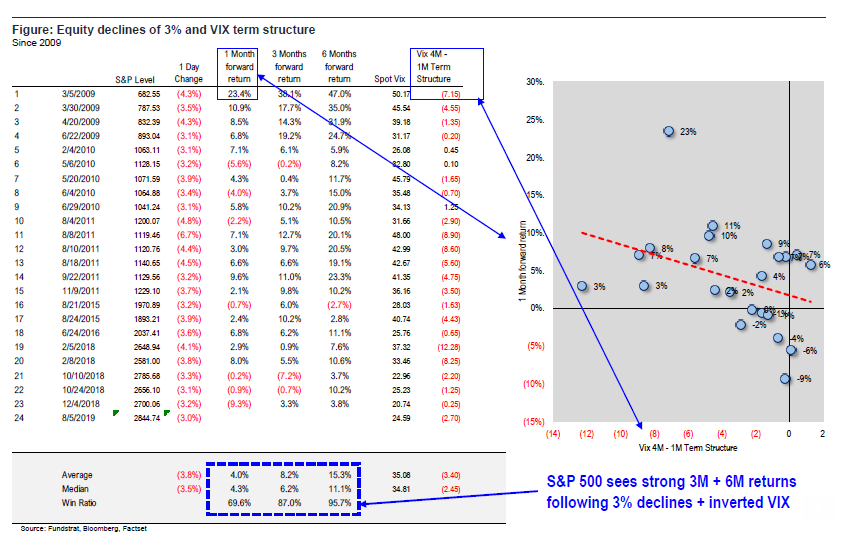 U.S. stock futures were pointing to a nice bounce at the open, though not enough to recover Monday’s losses.

Gold ​futures and Treasury yields ​saw little movement as the move to safety reversed for now.

Walt Disney ​earnings come after the close of trade. Marriott International ​may see pressure after the hotel chain cut its earnings outlook.

Video-game makers will be in focus after Monday’s selloff, which followed Republican lawmakers including Trump and House Minority Leader Kevin McCarthy blaming obsessive play for the shootings.

Making a similar point to Thomas Lee’s above, Charlie Bilello of Pension Partners has tracked how markets respond after CNBC airs a “Markets in Turmoil” special. 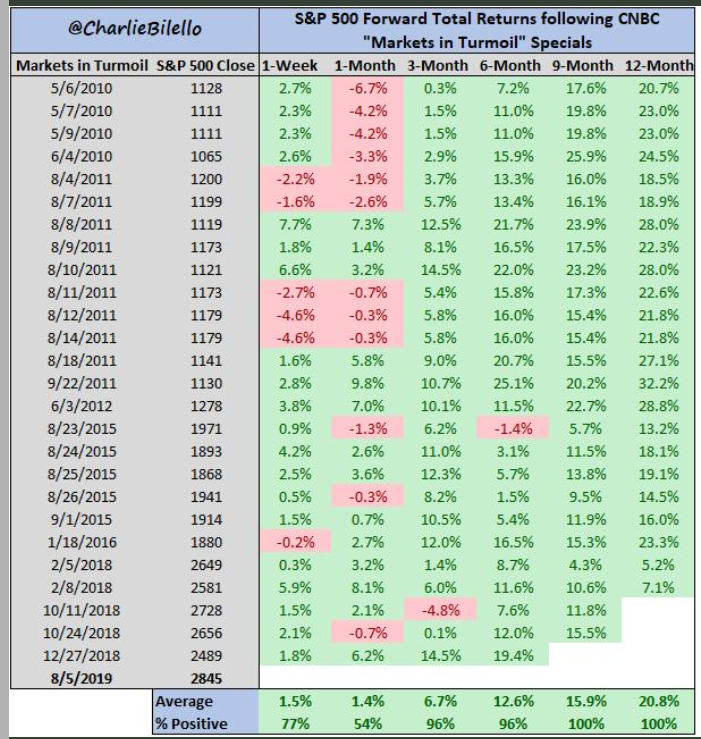 The Twittersphere is abuzz because, in the rekindled debate over assault weapons following two mass shootings inside 24 hours this weekend, this dad asked how a ban would impact his routine killing of feral hogs (30-50 feral hogs to be precise) when his children are outside playing.

Legit question for rural Americans - How do I kill the 30-50 feral hogs that run into my yard within 3-5 mins while my small kids play?