The buzz is largely gone. And today’s situation END_OF_DOCUMENT_TOKEN_TO_BE_REPLACED

Psychedelics could be a game-changer for millions struggling END_OF_DOCUMENT_TOKEN_TO_BE_REPLACED

Stock Picking In A New Era Of QE To Come

In Sep. 2019, the overnight lending markets were squeezed by a cash crunch and the Fed had to pump in $366 billion to tide over the crisis. It also announced a one-quarter point rate cut, which was expected.

The story had just begun.

Post the Sep. 2019 meeting, the economy got surrounded by hostiles such as falling manufacturing and services indices, a global trade war that refuses to die down, conflicts in the Middle East, slowing wage growth, falling consumer confidence, etc.

It now seems that the Fed is left with little choice but to cut rates by another one-quarter point and announce a Quantitative Easing (Q.E.) program in its 29-30 Oct. meeting.

A Q.E. is a targeted program - for example, if the infrastructure is in a poor state and there is a credit squeeze, the Fed may announce a specific Q.E. for infrastructure projects. Any Q.E. is announced after taking into account many factors, including money supply, inflation, consumer spending, current and capital account data, GDP, sectors that are suffering, and the usual economic indicators.

Currently, the Fed is facing multiple headwinds (described above) and its goals will be to increase consumer confidence, spending and business activity, and boost inflation. Therefore, this forthcoming Q.E. should focus on putting more money in the hands of consumers and small businesses so that they can spend on consumption or expansion, and thereby revive the flagging indices.

Consumer discretionaries include products like fast food, entertainment, apparel, and general stuff that are desired by consumers. 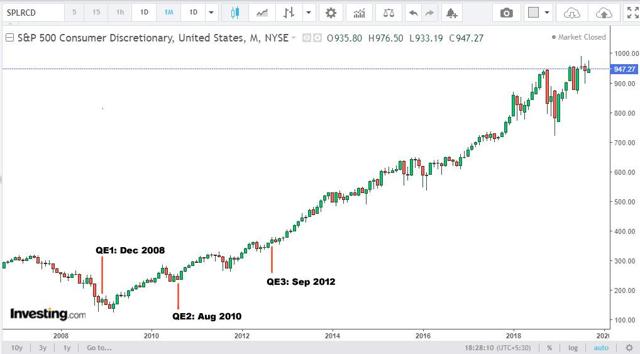 After QE1 in December 2008, the SPLRCD started moving up after a lag of two months, and was later boosted by QE2 and QE3. It went on to climb higher over time.

Starbucks (SBUX), a consumer discretionary, performed spectacularly over a period of time: 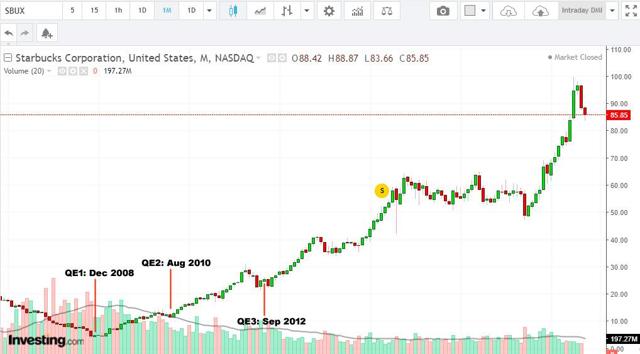 A Q.E. in 2019 will selectively help the sector as the goal is to put money in the hands of the consumer.

Staples are essentials, and not impacted by stimulus. This sector grows steadily over time. In this sector, you need to track potential disruptors - Gen X'ers and Millennials are changing the rules of the game and it'll pay big to latch on to a company that is on the right side of the trend. See what happened to Beyond Meat (BYND)! 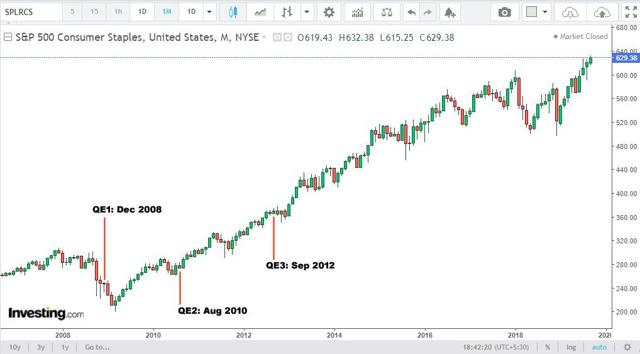 The XLP Consumer Staples ETF performed solidly after reacting in the first months following the 2008 Q.E. 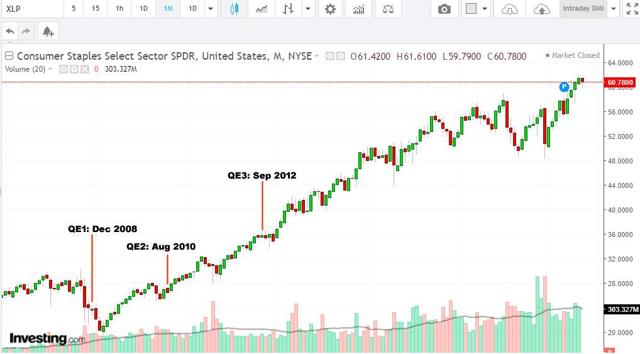 Post Q.E., bond prices rise and strengthen bank's balance sheets. However, long-term yields take a hit and net interest margins get narrowed down. For banks, it all boils down to efficient financial management of the new money. 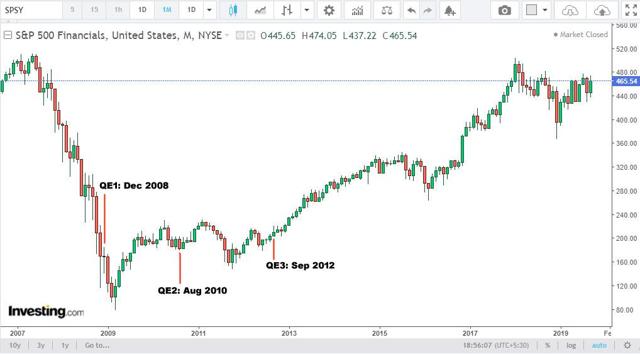 Here too, the idea is to hunt for disruptors instead of going for the conventionals. Alibaba (BABA) and PayPal (PYPL) were considered as fintech disruptors on their listing - these stocks have appreciated several times over their IPO price in a short span of time.

Global investors invest in promising emerging markets whenever they are supported with excess liquidity. Many countries in the S.E. Asia are doing well. For example, Vietnam and Indonesia have benefited because of the ongoing China-U.S. trade war.

The stocks to watch in this sector are ETFs like the iShares MSCI Emerging Markets ETF (EEM). The ETF has broken out of its trendline and bounced from lows on a day that saw the Dow falling 1.86%. 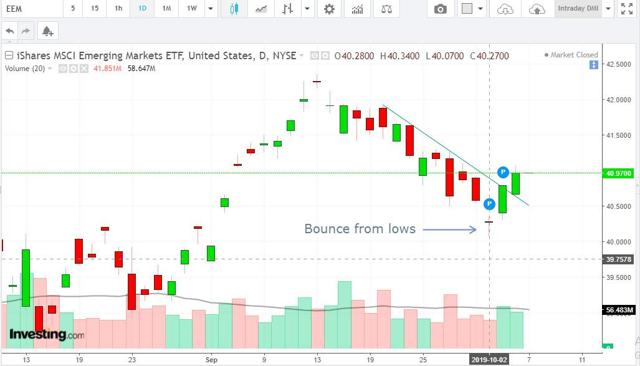 Precious metals like gold and silver also do well because when interest rates drop to near zero, global investors lose interest in bonds.

There also exists the possibility of unrest in the Middle-East and the risk of global trade war escalating. All the factors discussed above make a compelling case for investment in precious metals.

Chances of the Fed announcing a Q.E. in its 29-30 Oct. meeting are very high and savvy investors must make the most of it by latching on to select assets that will benefit out of excess liquidity and falling interest rates.

A Q.E. can trigger a massive bull run in select assets and there's serious money waiting to be made.