Stock Market Should Surge To A New Record In November, If History Is Any Guide

The S&P 500 hit an all-time high above 3,000 on Monday, and if market history is any guide, November could soon produce another record.

The fourth quarter of the year tends to be the strongest period for stocks. The month of November, in particular, has been among the best months of the year for the markets over the past decade.

All three major indices have traded positively 80% of the time in November since 2009, according to a CNBC analysis of Kensho, a hedge fund market analytics tool. The S&P gains an average of 1.8%, while the Nasdaq adds over 1.6% and the Dow Jones Industrial Average has been up, on average, 2%.

The Dow has posted the highest average return in November over the past decade, but the S&P reached a new record, primarily due to one stock’s rough patch: Boeing has been a big drag on the Dow of late. 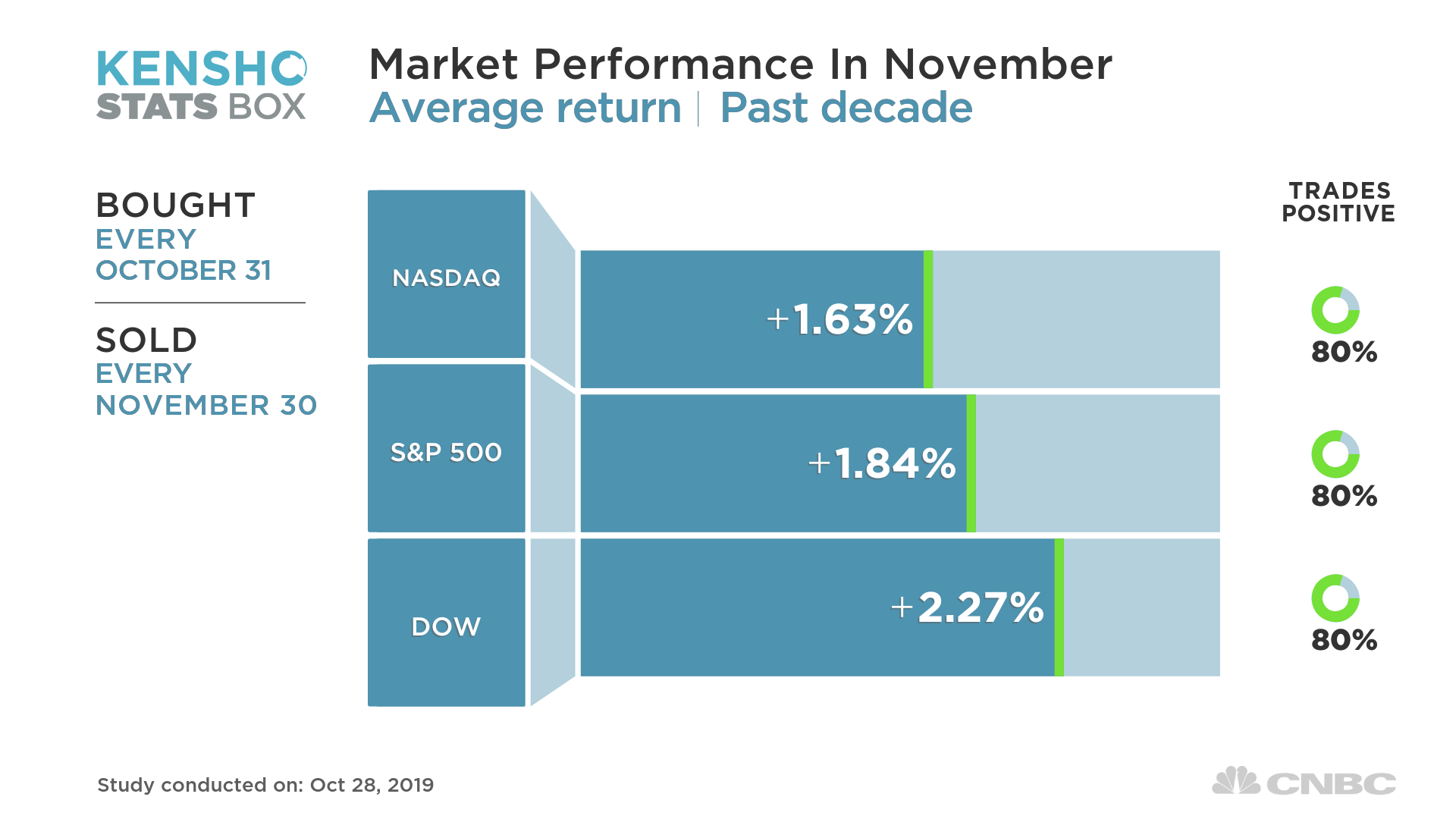 The S&P 500′s Monday close topped a record set on July 26. Stocks had suffered since the summer, but the S&P is now up 6% from its August lows. Several factors contributed to the stock market rally.

Stronger-than-expected earnings led to improved confidence on Wall Street. Walgreens Boots Alliance, AT&T and Spotify were among the companies that reported stronger-than-forecast profits on Monday.

“The market is finally breaking out of this trading range, and it is headed higher,” Andrew Slimmon, managing director at Morgan Stanley Investment Management, told CNBC on Monday. Speaking about the strength in cyclical stocks in particular, Slimmon said, “If the economy was going to hit a really bad patch, these stocks wouldn’t be recovering. The economic data has been better than expected. Earnings have come in better than expected.”

The top-performing sectors in the second to last month of the year, according to the CNBC analysis of Kensho data, are industrials, consumer discretionary and materials. 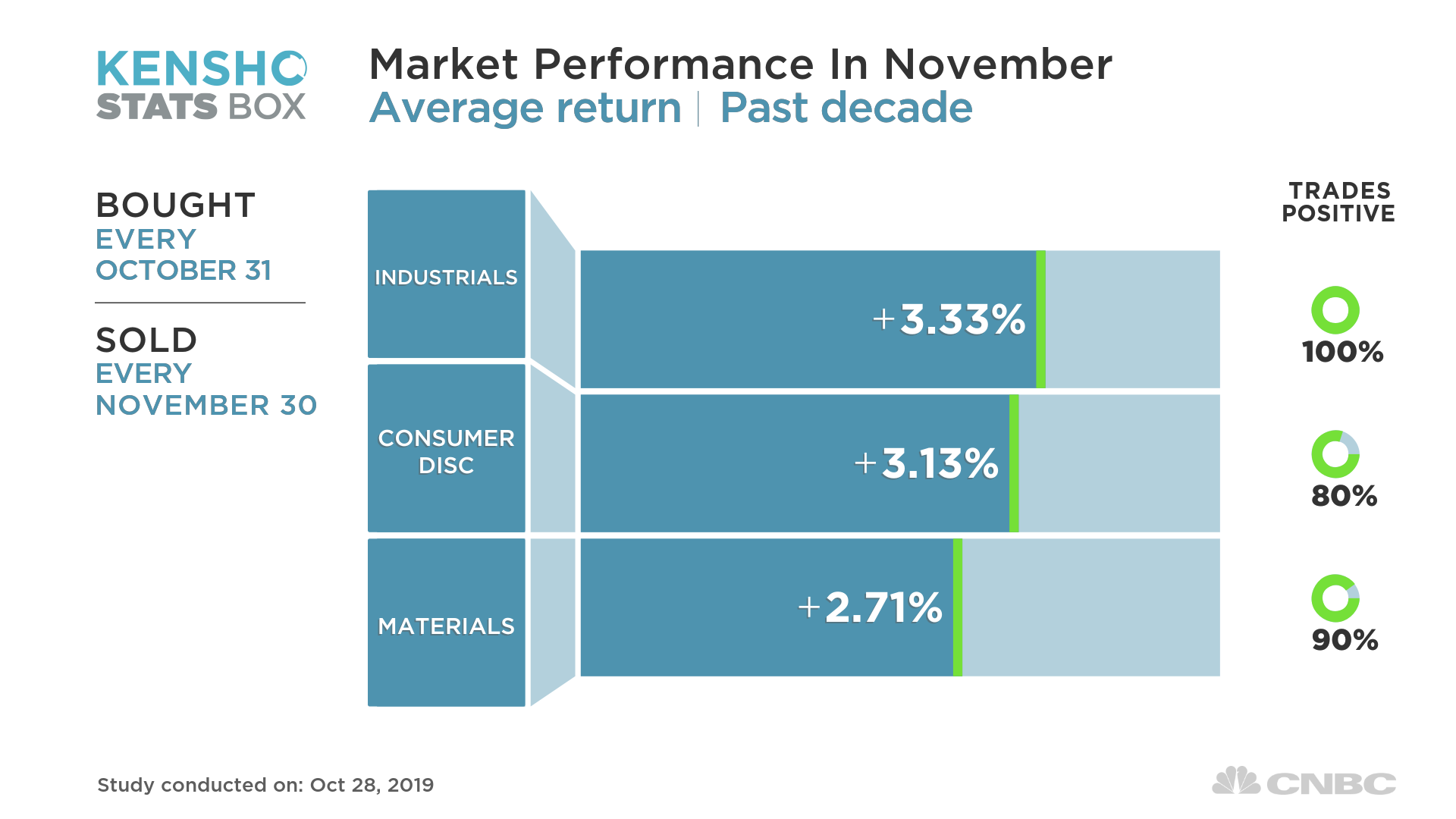 There have been signs of progress in U.S./China trade talks, which has helped boost stocks. The Office of the U.S. Trade Representative said in a statement last Friday that the nations “made headway on specific issues, and the two sides are close to finalizing some sections of the agreement.”

The market also expects that the Federal Reserve will announce another rate cut on Wednesday.

“This will be the third rate cut, and that’s been sort of the magic sauce in the 1990s to get growth to stop slowing,” Evercore ISI Chairman Ed Hyman told CNBC’s Squawk Alley on Monday. “They feel like they are in sort of a familiar territory if this works out, and the stock market rallying is a suggestion that it is working out.”

The S&P 500 closed at 3039.42 on Monday, a level that market technicians are viewing with confidence.

“The technical backdrop improved last week as the SPX finally distanced itself from the magnetic 3,000-point level,” Craig Johnson, chief market technician at Piper Jaffray, told CNBC during trading on Monday. “A close above 3,026 will validate a record-high breakout and likely open the door to a new leg higher,” he added.

Apple, UnitedHealth and JPMorgan Chase are among the stocks helping the S&P 500′s bid to fresh record highs. Apple shares are up more than 11% in October amid optimism around iPhone 11 sales. A recent CNBC analysis of Apple stock trading performed on Kensho suggests that Apple’s surge can continue through the end of the year.