When Nobel Laureate and "Irrational Exuberance" author Robert Shiller says he sees bubbles in the financial markets — you'd better listen up. He literally wrote the book on stock market crashes and bubbles after all.

"I see bubbles everywhere," Shiller, economics professor at Yale University and author of just-published "Narrative Economics" told investors gathered in Los Angeles Wednesday. "There's no place to go. You just have to ride it out. You invest even though you expect the price to decline." Shiller famously predicted the 2000 stock market crash and the 2007 crash of the housing market.

The timing of Shiller's ominous warning comes at a scary time. This is the month of the 90th anniversary of Black Monday. That day on Oct. 28, 1929, the Dow Jones Industrial Average fell 13%. That still stands as the second-worst drop in history and, combined with the pounding the stock market took in early days of the depression, took 25 years for investors to recover from.

Shiller sees bubbles in the stock market, bond market and the housing market. "You get ... in a situation where you know it's going to decline, but you still saved enough to hold you over; you have no choice."

Shiller, who won the Nobel Prize in economics in 2013, told Investor's Business Daily he expects just 4.4% average annual returns in U.S. stocks over the next 30 years. That's a disappointing return expectation — less than half the market's long-term return and well short of what pensions are calling for. The S&P 500's long-term return is 9.84%, says Index Fund Advisors.

High valuations rob future gains, Shiller says. He says the so-called CAPE Ratio on U.S. stocks is at an elevated level of 29. The CAPE Ratio, or Cyclically Adjusted Price-To-Earnings Ratio, looks at how much investors are paying for inflation-adjusted earnings averaged over a 10-year period. This indicator shows how expensive the market is, factoring out short-term distortions.

What's a high CAPE ratio, mean? "With a CAPE Ratio of 29 (currently), it's only happened a few times in history," Shiller says. "We got to the mid 30s in 1929. So that was a record." Markets subsequently crashed in 1929 and set off the Great Depression.

Shiller is as nervous about bonds as he is about U.S. stocks. Bonds continue to be one of the hottest asset classes going as investors seek the safety of income. The SPDR Portfolio Aggregate Bond ETF [ (SPAB[ARCA] - $29.41    )] delivered a stock-like total return this year of 8.31%. That's more than twice its average annual return of 3.7% over the past 10 years. Investors are pouring money into bond ETFs, hoping to hide from stock-market volatility and get at least some return.

"It (the bond bubble) seems to be related to people not paying enough attention thinking through the simple logic ... this can't keep going and it's going to end badly," he said. "These things may sink at some point."

Investors outside the U.S. are buying bonds with negative interest rates, simply betting they can sell to someone else when interest rates go even more negative. Holding the bonds until they mature locks in a negative return.

Shiller says the housing market is in a bubble phase, not unlike 2005. That was the point the housing bubble was inflated, but yet to go parabolic. "It's like 2005 again," Shiller said. "San Francisco and L.A. are already slowing down." That's a "bad indicator," he said, as those markets have been going up for years.

Yet, given the housing bubble isn't as "excited as it was" in the early 2000s, Shiller has been reluctant to publicly call it a bubble until now. And he thinks enough people remember the 2000's housing bubble so they recall "home prices really do fall." We're not "as exuberant now, so I'm not sure it's a repeat performance," he said.

Shiller says one spot in the world dodges such irrational exuberance: Europe. Developed-world international stocks are largely left out of the global boom. He sees European stocks being almost a third cheaper than U.S. stocks.

"I have higher expectations for Europe than the U.S.," he said.

Any time you read a comment on Investor's Business Daily asking if a stock market crash is near, I can pretty much guarantee you it's not near.

And professor Shiller isn't telling us anything new. There are bubbles everywhere, including private equity where performance is deteriorating, secondaries are no longer selling at a discount and volatility is often underestimated even if the alpha is there over the long run.

I think where Shiller's analysis is interesting is he expects just 4.4% average annual returns in US stocks over the next 30 years. That's a disappointing return expectation — less than half the market's long-term return and well short of what pensions are calling for.

Go back to read my comment on CalPERS where CIO Ben Meng said private equity is the key to achieving the 7% target rate-of-return. It most certainly is but as I stated above, there is a bubble in private equity too and return expectations are coming down there as trillions pour into that asset class.

This is why large investors like CPPIB are betting big on unlisted real estate and private debt to capture the returns they need over the long run to achieve their target rate-of-return.

Still, I have been around long enough to know when trillions pour into any asset class, including real estate and private debt, future returns decline.

Real estate is a function of interest rates and employment. With US rates and the unemployment rate at record low levels, it's no wonder real estate has outperformed this year.

If rates start creeping back up and employment growth starts decelerating fast, you will see real estate get hit.

But there is another channel where real estate (and private debt) can get hit very hard, the deflationary channel. If we see rates continue to plunge to record lows, going negative and the economy decelerating because people have too much debt on their books, a debt deflation spiral can easily develop and that will clobber real estate, private debt and pretty much all public and private assets.

This is why central banks are forcing investors out on the risk curve (while they warn pensions reaching for yield) by continuously lowering rates and engaging in QE or quasi-QE operations. Earlier this week, Mohamed El-Erian posted this chart on LinkedIn: 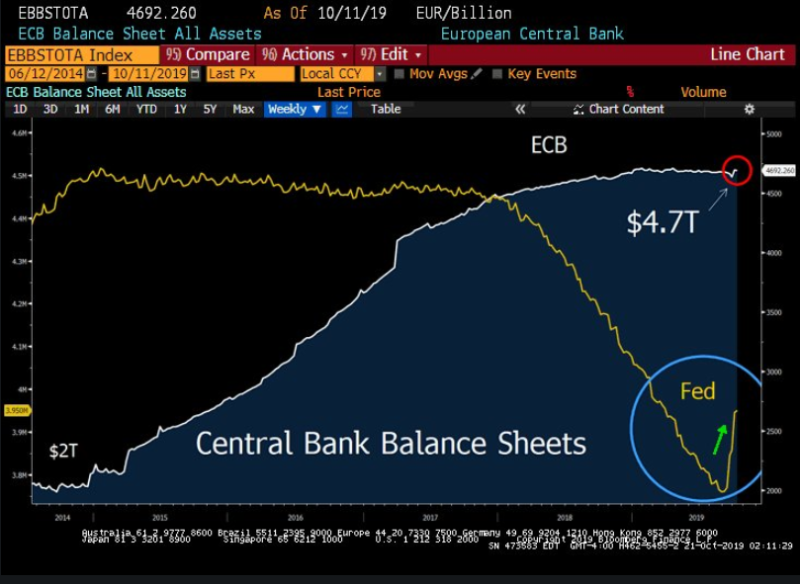 I wryly quipped: "Wake me up when the Fed's balance sheet surpasses all other central banks combined, then the fun begins."

Of course, I was joking because if he Fed is required to significantly increase its balance sheet to that degree, it won't be a pretty world economy, it will be a depression.

What about Shiller's thoughts on the bond market? He's not the only one worried about a bond bubble. Louis-Vincent Gave, CEO and co-founder of Gavekal Research, thinks the bond market is the biggest bubble of our lifetime, and BCA Research's Chief Global Investment Strategist, Peter Berezin, is warning investors that "owning bonds will be quite painful".

I used to work at BCA Research and back then there were some pretty smart guys working on fixed income analysis including Robert Scott, Mark McClellan, Gerard MacDonell and Brian Romanchuk who is now the publisher of the Bond Economics blog.

Brian and I later worked together at CDPQ and he always found it amusing when people were warning of the big bad bubble in bonds. He would tell me: "In 90s, there were legions of hedge funds shorting Japanese JGBs and they all got annihilated."

Still, there are reasons to carefully track US inflation as it creeps up and even though I am in the deflation camp, back in August, I stated that bond market jitters are overdone and absent real deflation, it was hard to justify rates on the 10-year US Treasury note near 1%.

Moreover, earlier this week, HOOPP's CEO Jim Keohane told me he thinks "deflation is already priced in" and if something changes, many investors will be caught off guard. He also said "inflation expectations are way off the mark" and he thinks breakevens on real return bonds (RRBs) are quite good right now and it's a good time to buy.

He talked about how Ray Dalio wrote a paper on paradigm shifts going on every ten years and he thinks Trump's tariffs are already inflationary and if labor unions start gaining more power, real wages will rise and you can easily see a spike in inflation (and rates).

Prices might go lower and yields higher but for that to happen, we need to see a pickup in global PMIs and I'm not seeing that just yet.

True, central banks have been easing but there is a lot of debt out there constraining growth. That's why I expect a muddle through economy.

As far as stocks, my thoughts haven't changed from last week, the S&P 500 did cross above 3000 but there's a lot of nervousness out there:

Still, if it can hold these levels and finish the year up close to 20%, I'd say that's a great year for stocks. Like I said last week, I don't expect a year-end rally or meltdown and think it's best to focus on stock picking than the overall index here.

Below, Nobel-prize winning economist Robert Shiller recently stated a recession may be years away due to a bullish Trump effect in the market. A recession is years away and yet a stock market crash is near? That's confusing!