We're approaching three years into the Trump presidency, and concurrent with that has been near three years of impeachment grumblings. We spent two years and some $40 million on an investigation trying to get him, and all we had to do was wait for a poorly-conceived phone call!

A brief background: Trump held a call in July with the Ukrainian president where he purportedly pressured him to investigate Joe Biden, a request that stems from then-vice president Biden openly bragging about pressuring the Ukrainian government to fire a prosecutor investigating a company where his son Hunter served on the board. The administration is willing to release the transcripts and they're already going after the credibility of the whistleblower who made the claims of quid pro quo against Trump. Suffice to say, we're in for a lot more of the bloviating and grandstanding that we've all come to know and love these last three years.

Markets used to be fairly spooked by this talk, but like most of us they've grown inured to the non-stop mutual slander. However, it looks like we're going to get just a little bit more in the way of actual action this time by House Dems, with House Speaker Nancy Pelosi announcing on Tuesday that an impeachment inquiry will commence. This is still a far cry from articles of impeachment being introduced, let alone an actual up/down vote in the House, but it's more than anything we've seen before.

A U.S. president has never been removed from the highest office (remember, Nixon resigned) and if House Democrats actually decided to press forward, we do have a decent reference point on market activity the last time a president was impeached. As with every fear-inspiring moment we've experienced during this 11-year bull run, you'd be wise to buy the dips. 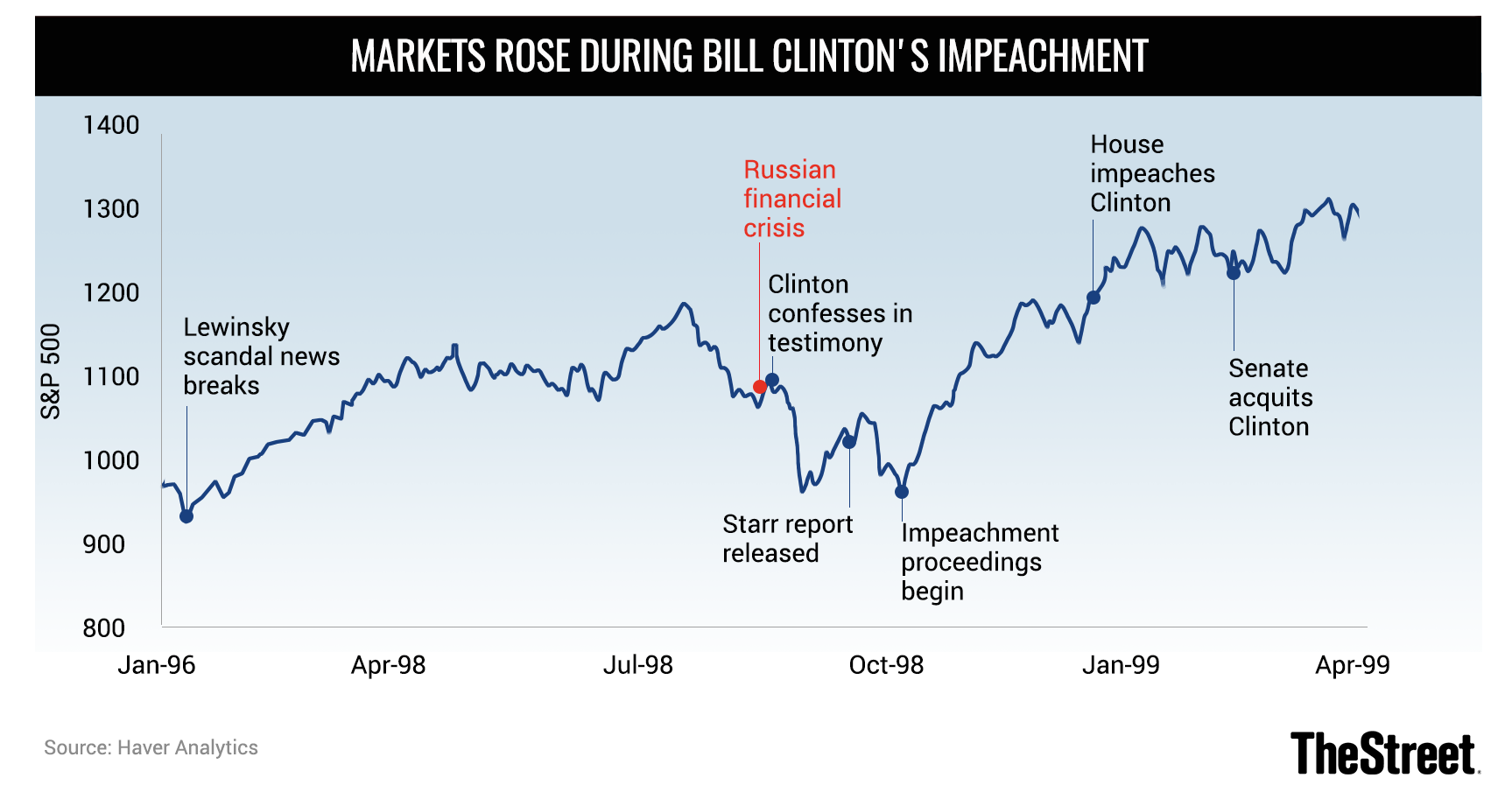 Consistent with most uncertainty-mixed-with-fear events, it's the anticipation of the event that's worse than the actual event itself. The 19% market decline during the Clinton impeachment proceedings occurred in the lead-up to the Starr report. And even though Clinton was formally impeached by the House, it was nothing but roses for the market during the entire process as it recouped its losses and then some up through the Senate acquitting him.

There are a lot of parallels here with the Trump situation. There's a potentially highly politicized impeachment by a hostile house (the GOP controlled the House that impeached Clinton) that eventually will lead nowhere due to a friendly Senate (Republicans hold a solid Senate majority and Democrats were the majority for the Clinton trial).

It's an utter impossibility that this Senate would produce anything near to the two-thirds majority needed to actually remove Trump from office. But let's say it did actually happen and this phone call was truly that bad: that means we would get a Mike Pence administration. Pence's business-friendly policies will be no different from his predecessor's. This is a sideshow that will lead no where, and the worst-case scenario is more of the same politically.

Now a 19% decline is pretty painful to endure, and though I really wouldn't anticipate anything close to that happening here even if Democrats tried to take real action, some protection may be in order. The recommendation here is not to panic and do not alter a portfolio built upon fundamentals and real investment analysis.

If you're on the risk-adverse side you can deploy protection against systemic, market-wide jitters by either buying SPX puts with around a three-month expiration (there's no way we don't have an abundantly clear direction on where this is going by then) or by simply shorting until the all- clear is sounded.