Market volatility is up in recent sessions, and END_OF_DOCUMENT_TOKEN_TO_BE_REPLACED

As tech takes a tumble this week, there END_OF_DOCUMENT_TOKEN_TO_BE_REPLACED

Since 1989, These Are The Defensive Sectors That Fare Best In The Tough Month Of September

Investors remain concerned that August’s negative sentiment could carry into September. They have good reason: September tends to be among the worst months of the year. Since 1989, history shows that betting on the major U.S. equity indices in September is no better than a coin flip.

Since 1989, the Dow Jones Industrial Average has traded positive just 47% of the time in September, while the S&P 500 has not fared much better, posting a positive return 52% of the time, according to a CNBC analysis of Kensho, an analytical tool used by Wall Street banks and hedge funds to identity potential trading profits based on market history.

Going back even further, September has been the worst trading month of the year on average since 1950, and the worst month for stock performance in years that precede presidential elections.

Some defensive sectors have outperformed both of the broader stock indexes in September over the past three decades. The telecommunications sector bucked the negative September sentiment, returning an average gain of 0.83% and trading positively 59% of the time.

Other defensive sectors — which tend to gain as yields decline and dividend stocks become more attractive to investors — among the top performers in Septembers dating back to 1989: Health care (0.71%); energy (0.45%); consumer staples (0.18%). Utilities has the smallest positive gain of the defensive sector group (0.11%) but has traded positive the most often (66% of the time). 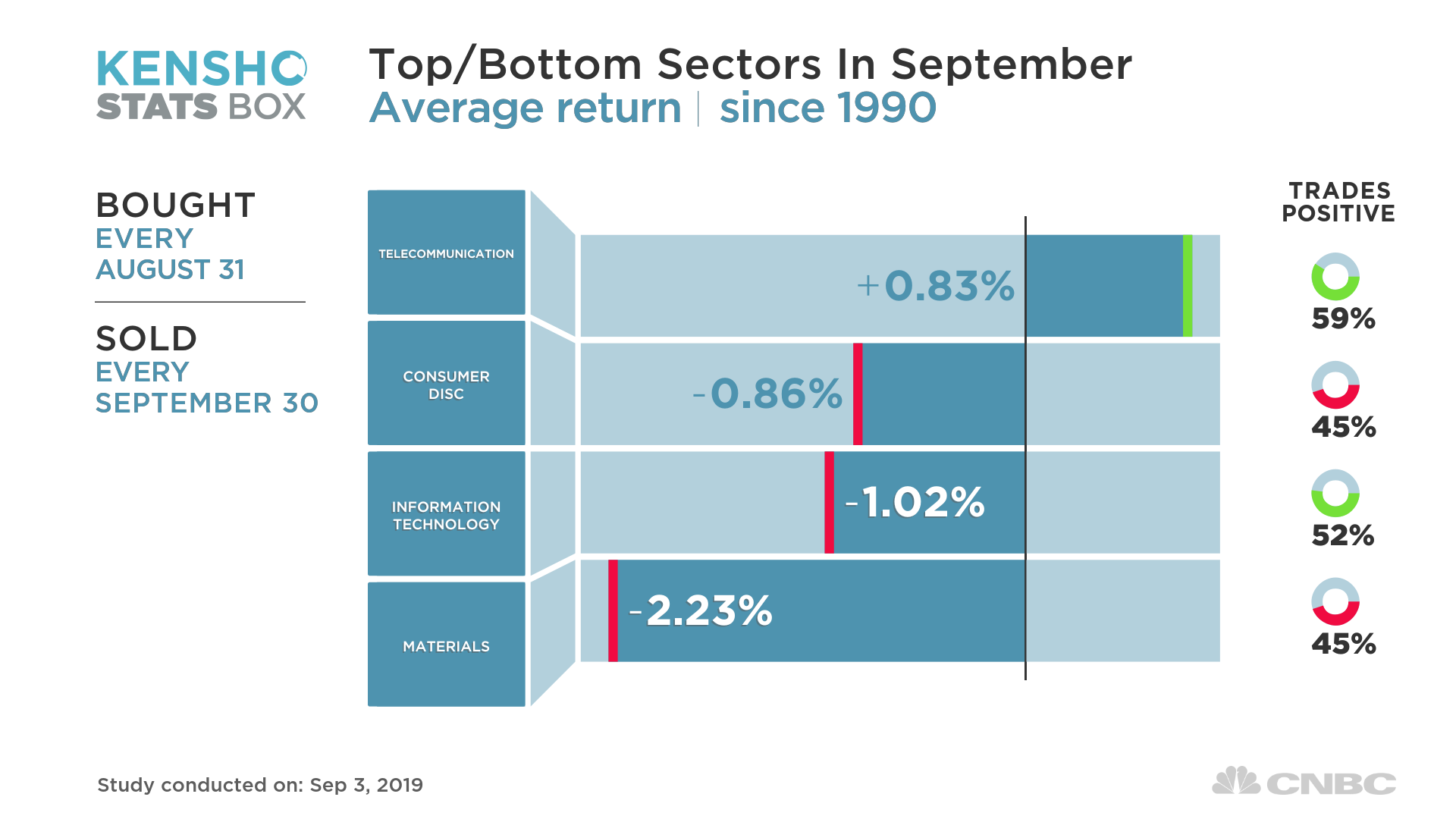 The Energy Select Sector SPDR (XLE) offers a play on interest-rate sensitivity and defensive positioning, but energy has been the worst performer this year with fears of a worldwide economic slowdown accelerating. It also has fallen to its lowest weighting in the S&P 500 (roughly 4% of the index) since 1989, according to CFRA data.

“The global macroeconomic picture continues to show fragility,” Katie Nixon, CIO at Northern Trust Wealth Management, wrote in a note on Tuesday. “We expect overall growth to trend lower under the weight of growing trade uncertainty.”

The Health Care Select Sector SPDR (XLV) offers a mix of growth and defensive but is trailing both growth sectors, like tech, and other defensive plays year-to-date, up roughly 5%.

One minor wrinkle: The best of the the defensive sector trades no longer exists.

In 2018 the telecom sector was reclassified as the Communication Services sector, with some significant changes in the top stock holdings. For example, Alphabet, Facebook and Netflix were all added to the Communication Services sector and represented a huge portion of the overall index. Facebook and Alphabet combined represent roughly 42% of the sector. The telecom sector was traditionally seen as a defensive sector and a value play, while Communications Services has stronger growth prospects with those tech heavy-hitters. The previous telecom index was 100% value stocks.

The worst-performing sectors in September back to 1990 are among the current market leaders: consumer discretionary (up 21% this year) and technology (up more than 27% this year).

Only three of the 11 S&P 500 sectors ended the volatile month of August in the green, and they are among the historically strong defensive plays: real estate, utilities and consumer staples.

“We’d like to see a shift in that leadership,” Ryan Detrick, senior market strategist at investment advisory giant LPL Financial, told CNBC on Wednesday. “As long as you keep seeing those more defensive areas lead, we think this market can kind of continue to be range-bound and ... choppy and frustrating. But if you get some more leadership from the more cyclical areas [like financials and technology], that can be a positive. But we might not be there yet.”