Shorts Beware, Your Archenemy in the Stock Market Is Revving Up

Hedge funds are embracing bearish bets and retail investors are bailing from stocks. And yet neither is denting equity resilience.

One explanation is -- surprise! -- corporate buybacks, which are happening at a torrid pace. As the S&P 500 fell last week for its first back-to-back losses this year, companies from banks to technology providers stepped up repurchases of their own shares, client data compiled by Bank of America Corp. show.

At $2.4 billion, the amount of buybacks jumped 23% from a year earlier, making the week the eighth-busiest since the firm began tracking the data in 2008. 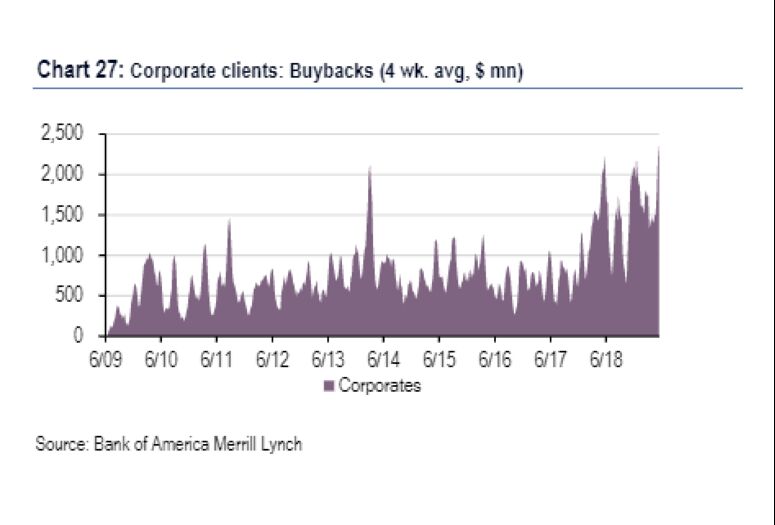 “It’s definitely been a component of market resilience,” said Tim Chubb, chief investment officer at Girard, which has about $3.7 billion in assets under management. “We’re in an environment where companies have so much cash, and I just don’t think they know what to do with it,” he added. “They think their stock is cheap to an extent. Buybacks are the way to do it.”

Stocks have been rattled by a barrage of trade-related headlines ever since President Donald Trump hiked tariffs on Chinese goods earlier this month. While the market has suffered some of the year’s worst losses, the subsequent bounces were equally impressive.

The S&P 500 rose 0.9% Tuesday, following a two-day, 1.2% decline. Last week, the index’s biggest drop since January was almost erased over a three-day advance. All told, the benchmark is only 2.8% off a record high reached at the end of April, with its peak-to-trough decline capped at 4.5%. 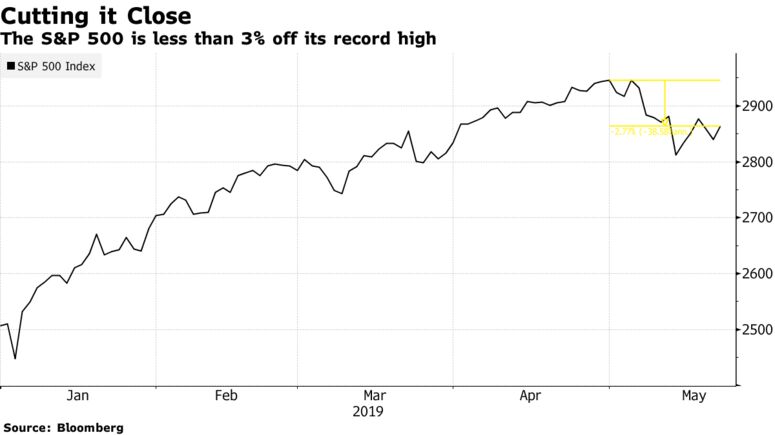 The dips may have, in fact, provided good buying opportunities for companies to step in and buy at lower prices, said Jim Paulsen, chief investment strategist at Leuthold Group.

“There’s something to be said about insiders showing confidence that their stock is probably going to go up. They think it’s relatively cheap or a good opportunity to buy it back,” said Paulsen. “It’s typically a good sign that has led to higher stock prices.”

Buybacks have climbed in recent years even as they’ve come under pressure from politicians who are focusing on corporate governance as an election issue. While far from being a consensus view, repurchases have been a bull case that strategists like David Kostin at Goldman Sachs have cited for the 10-year rally to keep going.

Corporate appetite has dwarfed that from all other investors as the biggest source of demand for U.S. stocks. Net purchases from corporations totaled $1.6 trillion during the past three years while investors from pensions to mutual funds to individuals were sellers, according to data from Goldman Sachs.

While it’s only one bank’s client flows, BofA’s data demonstrated a similar pattern. Over the last three weeks when stocks slipped, companies stepped up buying while hedge funds and individual investors retreated. During the stretch, buybacks totaled more than $7 billion. By contrast, selling from the other two categories reached almost $1 billion.

Traders blindsided by President Trump’s seemingly sudden turn against China have taken precautions and are shielding themselves should things take a turn for the worse. Short interest on the most popular S&P 500 exchange-traded fund has surged toward the highest levels of the year. And hedge funds have sought vehicles such as index options for protection.

Helping soothe that anxiety is corporate demand that has reliably prevented share declines from snowballing. During the February rout in 2018, the market’s bottom came in a week when Goldman Sachs’s corporate-trading desk saw the busiest buyback orders ever.

“I’ve been impressed with how little this dust-up -- which, frankly, is probably more serious than where we were in December -- how little it’s actually impacting the market,” Stephen Auth, equities chief investment officer at Federated Investors, told Bloomberg TV.