Sell AMD With the Stock Between Key Levels 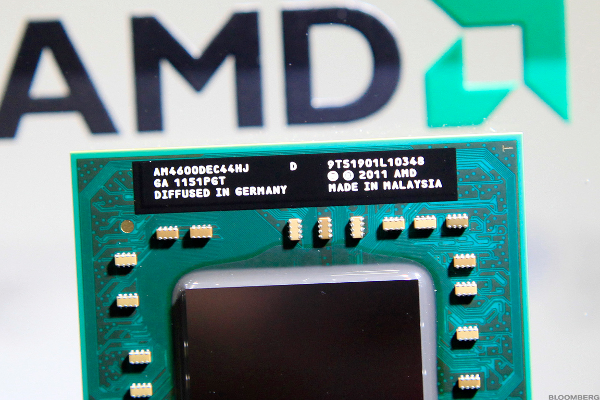 Advanced Micro Devices is trading between its semiannual pivot at $26.38 and its weekly risky level at $29.09, where profits should be taken. If you prefer to wait until the end of the week consider a sell stop on a close on Friday below the stock's five-week modified moving average at $26.47, which is just above the semiannual pivot.

Will AMD follow Intel lower? Intel had a similar profile before its stock plunged following its earnings report that was released after the close of trading on April 25. I showed risk to its monthly value level at $51.08 if the stock failed to hold its quarterly pivot at $57.57. Intel traded as low as $50.87 on Tuesday.

Analysts expect AMD to earn 5 cents a share when it reports quarterly results after the closing bell Tuesday. Supply and demand for graphics chips is usually the driver for earnings as these semiconductors are considered a commodity. The stock is not cheap as its P/E ratio is 79.66, according to Macrotrends. Susquehanna opines that good news is priced into shares of AMD. The firm cited semiconductor demand for PCs, servers and graphics cards that compete with Intel and Nvidia.

Intel was hurt by its guidance. Will AMD be helped by guidance? This could come from game console chips and server components. Keep in mind that AMD missed earnings-per-share estimates on Jan. 29, but the company was upbeat for full-year 2019 on its next-generation of semiconductor components for PCs, data centers and servers.

The Daily Chart for AMD 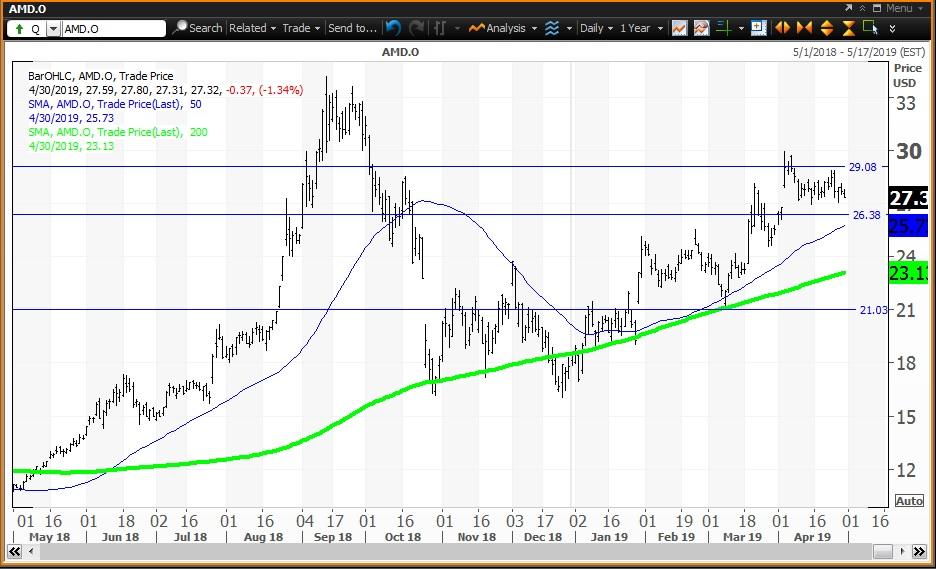 The daily chart for AMD shows that the stock has been above a "golden cross" since June 13, 2018. A "golden cross" occurs when the 50-day simple moving average rises above its 200-day simple moving average and indicates that higher prices lie ahead. The stock set its 52-week intraday high of $34.14 on Sept. 13 and it plunged to its 200-day SMA at $16.92 on Oct. 29, a bear market decline of 50%. Notice how AMD climbed its 200-day SMA since then as a level at which to buy the stock on weakness. The "golden cross" has not been violated. Note that when the stock traded as low as $16.03 on Dec. 26 it closed that day above the Dec. 24 high. This is called a "key reversal" favoring higher prices. The 2018 close at $18.46 was the input to my proprietary analytics and its annual value level remains at $8.65 and its semiannual pivot at $26.38 is the key level to hold now. The close of $25.52 on March 29 was an important input to my analytics and the quarterly value level at $21.21 will remain in play until the end of June. Tuesday is the last day of April so a new monthly level for May will be known Wednesday.

The Weekly Chart for AMD 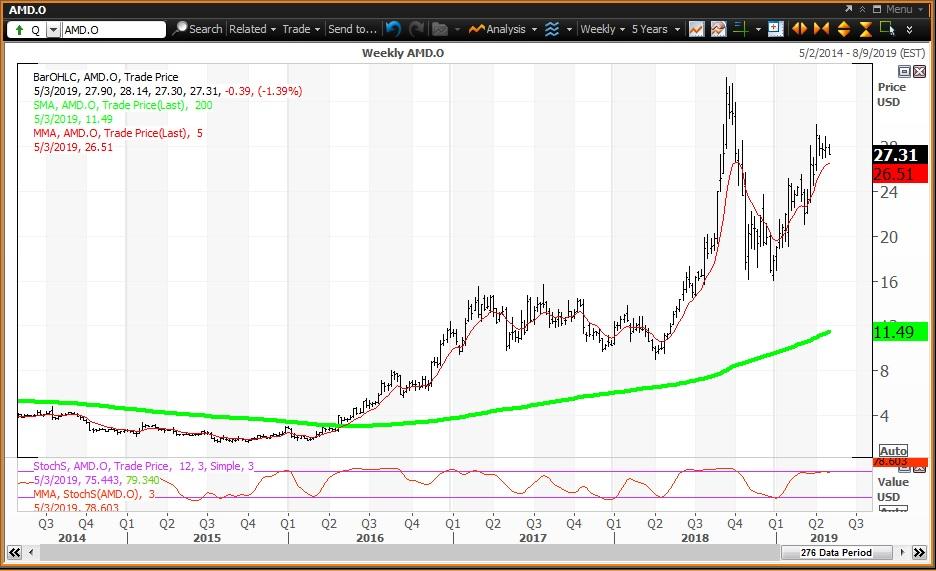 The weekly chart for AMD will be negative if the stock ends this week below its five-week modified moving average of $26.47. The stock remains well above its 200-week simple moving average or "reversion to the mean" at $11.49. The 12x3x3 weekly slow stochastic reading is projected to dip to 78.16 this week down from 80.18 on April 26 moving below the overbought threshold at 80.00.

Trading Strategy: Buy weakness to the 200-day simple moving average at $23.13 and reduce holdings on strength to its weekly risky level at $29.09. Consider using a sell stop below its semiannual pivot at $26.38.

How to use my value levels and risky levels:

Value levels and risky levels are based upon the last nine weekly, monthly, quarterly, semiannual and annual closes. The first set of levels was based upon the closes on Dec. 31. The original semiannual and annual levels remain in play. The weekly level changes each week; the monthly level was changed at the end of January, February and March. Today's close will result in a monthly level for May. The quarterly level was changed at the end of March. My theory is that nine years of volatility between closes are enough to assume that all possible bullish or bearish events for the stock are factored in. To capture share price volatility investors should buy on weakness to a value level and reduce holdings on strength to a risky level. A pivot is a value level or risky level that was violated within its time horizon. Pivots act as magnets that have a high probability of being tested again before its time horizon expires.