Lordstown Motors (RIDE) said on Tuesday that it END_OF_DOCUMENT_TOKEN_TO_BE_REPLACED

Robust Jobs Data Paint a Pretty Picture for These Stocks

Jobs growth in July was more or less on par with estimates, with unemployment rate near a 50-year low. Hiring increased at a steady pace despite trade concerns, and fears of a major slowdown for the U.S. economy. Let us, thus, look at stocks that can make the most of the underlying strength in the labor market.

The United States added a heartening 164,000 jobs in July, almost in line with analysts' expectations, per the Labor Department. Such solid job additions calmed nerves about the health of the economy, which has now entered its 11th year of expansion. It's worth pointing out that U.S. jobs growth had been healthy in the first half of 2019.

Meanwhile, the jobless rate remained near a 50-year low of 3.7% last month. The real unemployment rate, including those who are underemployed and discouraged, also known as the U6 rate, slipped to 7% from 7.2% a year ago.

At the same time, another broader gauge of unemployment that shows people who can't find a full-time job dropped just below 4 million for the first time since 2006. By the way, Fed Chair Jerome Powell said recently that "people who live and work in low- and middle-income communities tell us that in who have struggled to find work are now getting opportunities to add new and better chapters to their lives." 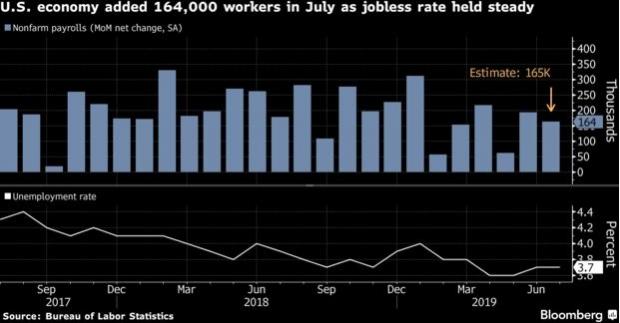 Such a strong month of hiring has resulted in the labor force participation rate to increase to 63% in July, more than the expected 62.9%. This surely bodes well for staffing companies.

Gad Levanon, Chief Economist, North America, at The Conference Board had said that "with the U.S. economy slowing a little, but still projected to remain above its 2 percent long-term trend, we expect job growth to remain strong enough to continue tightening the labor market and draw more people off the sidelines."

Professional and Business Services Lead the Way in Hiring

By and large, the jobs report showed that most of the industries added jobs and workers' pay continued to remain consistent over the past few months. Healthcare companies boosted payrolls by 30,000 and social assistance providers took on 20,000 workers. Manufacturing companies increased staffing by 16,000, but, it were retailers who missed out on jobs growth. Retail trade added 49,000 fewer people in July compared to the same period last year.

From recruiters to professional and business service houses, all stand to gain from a steady jobs report. Thus, investing in such stocks seems the right thing to do now. We have picked four stocks that should make meaningful additions to your portfolio. These stocks flaunt a Zacks Rank #1 (Strong Buy) or 2 (Buy).

Cross Country Healthcare, Inc. CCRN provides healthcare staffing, recruiting, and workforce solutions in the United States. The company currently has a Zacks Rank #2. The Zacks Consensus Estimate for its current-year earnings has moved up 16.7% over the past 60 days. The company's expected earnings growth for the next year is 142.9%, significantly higher than Staffing Firms industry's expected rally of 11%.

Everi Holdings Inc . EVRI provides technology solutions for the casino gaming industry in the United States. The company currently has a Zacks Rank #2. The Zacks Consensus Estimate for its current-year earnings has climbed 63.2% over the past 90 days. The company's expected earnings growth for the current year is 210%, way more than Business - Services industry's estimated rally of 4.3%.

SPS Commerce, Inc . SPSC provides cloud-based supply chain management solutions. The company currently has a Zacks Rank #2. The Zacks Consensus Estimate for its current-year earnings has risen 5.5% over the past 60 days. The company's expected earnings growth for the current year is 20.2%, way more than Business - Services industry's projected rally of 4.3%.

Viad Corp VVI operates as an experiential services company in the United States. The company currently has a Zacks Rank #1. The Zacks Consensus Estimate for its next-quarter earnings has increased more than 100% over the past 60 days. The company's expected earnings growth for the next quarter is 222.2%, way more than Business - Services industry's projected rally of 60%.