OrganiGram Holdings May Have An Upside Surprise In Store

As investors, when we size up a stock, I imagine the first thing we look at is the chart to see if a stock is heading higher. A quick glance will tell the general trend. A solid company performing solidly should, in theory, be trending higher. OrganiGram Holdings (OGI) may not have that chart at the present moment, but I wonder about its next moves; there may be a surprise in the very near future.

Let’s break down the chart and the release notes from the latest earnings release to get ready for the November 24th upcoming earnings.

Does it get any worse than this? 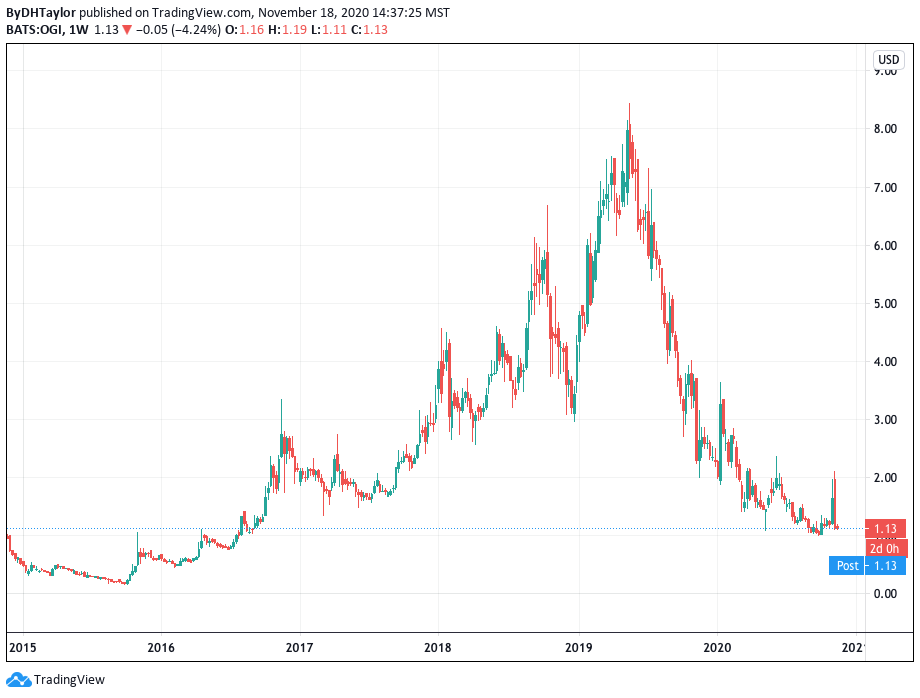 In the cannabis industry, yes, it can get worse than this chart; take a look at Tilray (TLRY) and Aurora Cannabis (OTC:ACB), the latter of which was once a darling of the industry and may now go belly-up.

OrganiGram Holdings went public in 2014 at ~$2.00 per share. After 6 years of being in business, an investor would be sitting on a negative position and never once have received a dividend. Again, however, not the worst chart in the cannabis industry.

Canadian Cannabis And Some Backdrop

Long-time readers of mine will know that I am very bullish on the cannabis industry. I was bullish in 2018 when cannabis was legalized in Canada, and wrote prolifically on the subject as well as built up a nice portfolio.

Unfortunately, I contracted a virus while traveling through Central America; I own a coffee business where I sell central American coffees direct to consumers. I was taken out for 15 months and nearly given my last rites. My portfolio was liquidated - the upside was that I was liquidated at the highs.

Problems ensued after cannabis' initial legalization in Canada. Dispensaries in Canada are highly regulated and, in many cases, are run by the government themselves. Dispensaries ran out of supplies quickly, and there were many distribution hangups creating logjams that prevented supplies from reaching the market. But mostly, the process was just slow to move.

There was a slew of companies that started up in Canada trying to capture Green Gold. Some of these companies within the industry were overly leveraged and burning cash, while others were not. We are seeing the fruits of those decisions now as to how a company was run, and potentially, if it will survive.

As it is, Canadian dispensaries are opening more and more, and there have been significant increases in retail sales. In fact, some of the numbers are starting to print staggering MoM increase; the past three months have seen a 90% increase in retail sales. Keep in mind, there’s been a global pandemic during this same time frame. Canadians turn out to be interesting people: 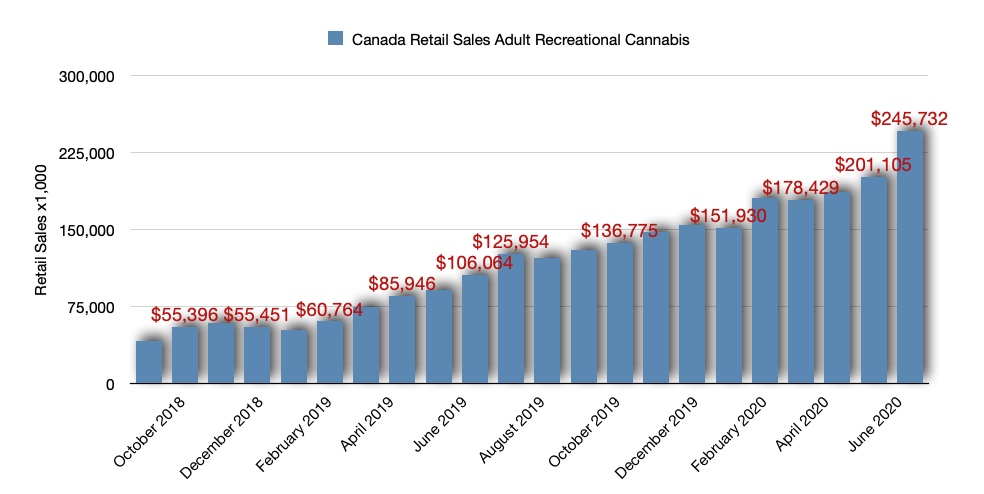 Above, you can see the progressive growth of cannabis consumption in Canada. This is total retail sales of cannabis, both adult use and medical. In the two years of 2019 and 2020, there have been only 2 months with negative growth. The rest of the months have printed upward progressions.

So, how does OrganiGram Holdings fit into this?

OrganiGram Holdings is both an adult use and medical marijuana company. It primarily focuses on sales in Canada. So, you would think that its revenues might mirror that of the overall Canadian retail sales. But you would be slightly off: 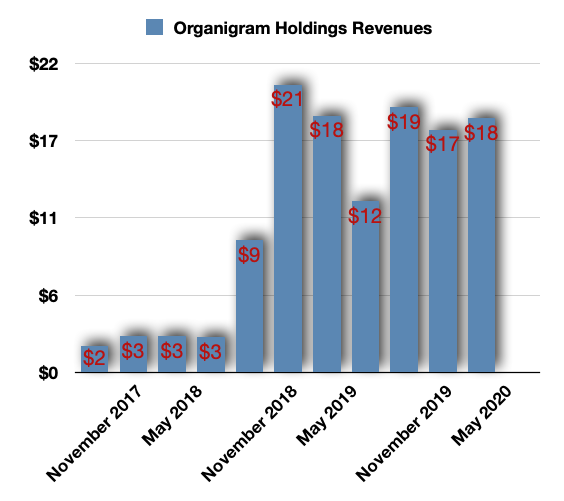 Whereas a majority of Canadian cannabis companies are printing better-than-expected revenues, and by extension, Canadian retail sales are moving higher and higher, OrganiGram is one of the outlying exceptions. There was an impressive increase in late 2018, and then revenue went nowhere.

The last earnings release from the company saw revenues come in basically flat, but down YoY. Revenues were higher than expected by about 15%. 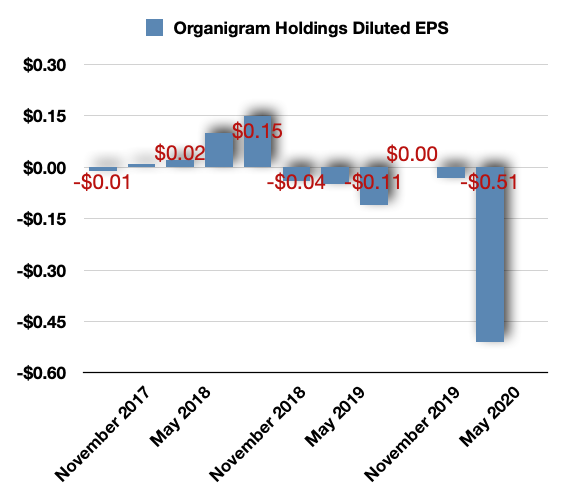 The negative moves lower were due to COVID-19 costs. This is where I think there may be the potential for an upside surprise.

COVID-19 costs may be a one-off now that OrganiGram has written down these costs.

When you factor in the potential return of the pre-rolls into revenue, this pushes revenues back upwards for the consecutive quarter. OrganiGram also believes margins will improve during this quarter and is already seeing signs of this. This will improve the company's revenue stream and the earnings outlook.

I have been a bit critical of cannabis companies that are not enjoying increasing revenues during this epoch of the legal cannabis market in Canada. The increases in retail sales are a cumulative result of all of the companies in Canada. So, if the cumulative results show upward increases - 90% in the past three months, no less - where is OrganiGram in this?

It is my belief that cannabis companies should be solidifying their market position and customer base during this time. OrganiGram is not producing in-kind increases like the rest of the industry and nation are printing.

But momentum may be on OrganiGram’s side with the overall cannabis industry selling more and more. This is another factor that I am looking for with a potential upside surprise in its earnings.

The Israeli market may produce results that show up immediately in the company’s next numbers. I am looking for this as well.

Any discussion of OrganiGram Holdings must now look towards the latest stock offering the company is undergoing; it is currently offering 32 million units for ~C$60 million of new shares. There are three tranches, and the latest is the second edition.

The proceeds are being used to acquire Hyasynth Biologicals, a biotech company. I do not see this necessarily as a move that should dilute the share value too much simply because OrganiGram is not offering more shares to raise capital simply to support itself; this is to acquire an existing venture.

“While we believe there will always be a sizeable market for dried flower and derivative based products produced at our indoor facility, it is exciting to watch Hyasynth’s progress in biosynthesis. We believe biosynthesis has the potential to redefine the cannabinoid production landscape by setting a scalable and reliable platform of supply that cannabis producers and pharmaceutical companies can leverage for success.”

In the future, this will pan out. For now, it is becoming a drain on the company’s stock.

That being said, as OGI stock continues to decline in price, the company needs to sell more shares to raise the necessary capital. This then dilutes shares in a semi-perverse negative feedback loop.

Nonetheless, OrganiGram has cash on hand, but maybe just a fistful: 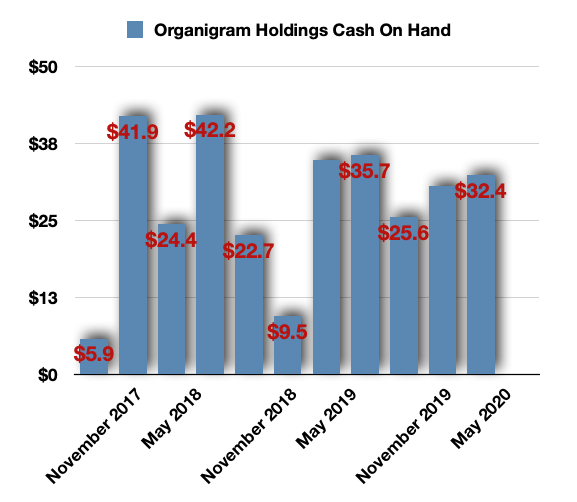 The company looks to be burning about $20 million annually, but it only has $32 million on hand; it will either need to become profitable very quickly or raise cash to support operations.

OrganiGram has been trading for 6 years. Investors have not really seen a return on investment during this time, as the stock is well below its offering price.

That being said, this looks to be a “heyday” for Canadian companies, since they are producing ever-increasing revenues during this time. As more dispensaries are opening, more sales are occurring, and I expect that given this momentum, OrganiGram can see some gains from this. But I would want to see impressive gains such that we are seeing with, say, Curaleaf Holdings (OTCPK:CURLF).

The pre-rolls are back in operation from its COVID-19-induced pause, which this line previously provided 14% of revenue for the top line. OrganiGram stated that it is already producing these pre-rolls again. This will add to the revenue picture.

As we have seen in other companies, the Israeli market is producing results that are showing up in the bottom lines of some of these companies, and those increases are surprising towards the upside. Likewise, I am looking for increasing revenues from Israel with OrganiGram.

With the write-downs done with over COVID-19 and costs minimized, I look for margins to improve, which will have a positive effect on EPS and other bottom line numbers.

In general, I believe that the momentum for the industry is upward, and I think that OrganiGram has the potential to print above-expectation revenues and earnings next week with their upcoming earnings release. This will push the stock upwards. For these reasons, I am bullish on this stock over the short term.