Shares of Aurora Cannabis fell on Tuesday after END_OF_DOCUMENT_TOKEN_TO_BE_REPLACED

In a report released today, Oren Livnat from END_OF_DOCUMENT_TOKEN_TO_BE_REPLACED

Oil Stocks: A Reason To Be Optimistic

The initial low for a market can conjure up quite a bit of negative emotions, but the retest of the low is often even worse from a sentiment standpoint. Those investors that thought they were out of the woods get dragged right back in months later. Often, this causes market participants who did sell the initial low to completely capitulate. The reason for this is that while they may have had the intestinal fortitude to sit through the initial drop, the retest exhausts their patience. This situation is currently occurring in the Oil Exploration & Production ETF (XOP), but fortunately, there are some silver linings to this retest. Not only is momentum showing a slight positive divergence vs. the December lows, but the number of oil stocks hitting new 52-week lows is also one-third what it was during the December lows. This suggests that the wheat has been separated from the chaff within the sector this time around, and we do not have the throw the baby out with the bathwater mentality that resided in late December. While there are absolutely no guarantees that the lows are in and that the $24.00 level holds, the current divergences are at increasing the probabilities that they do. 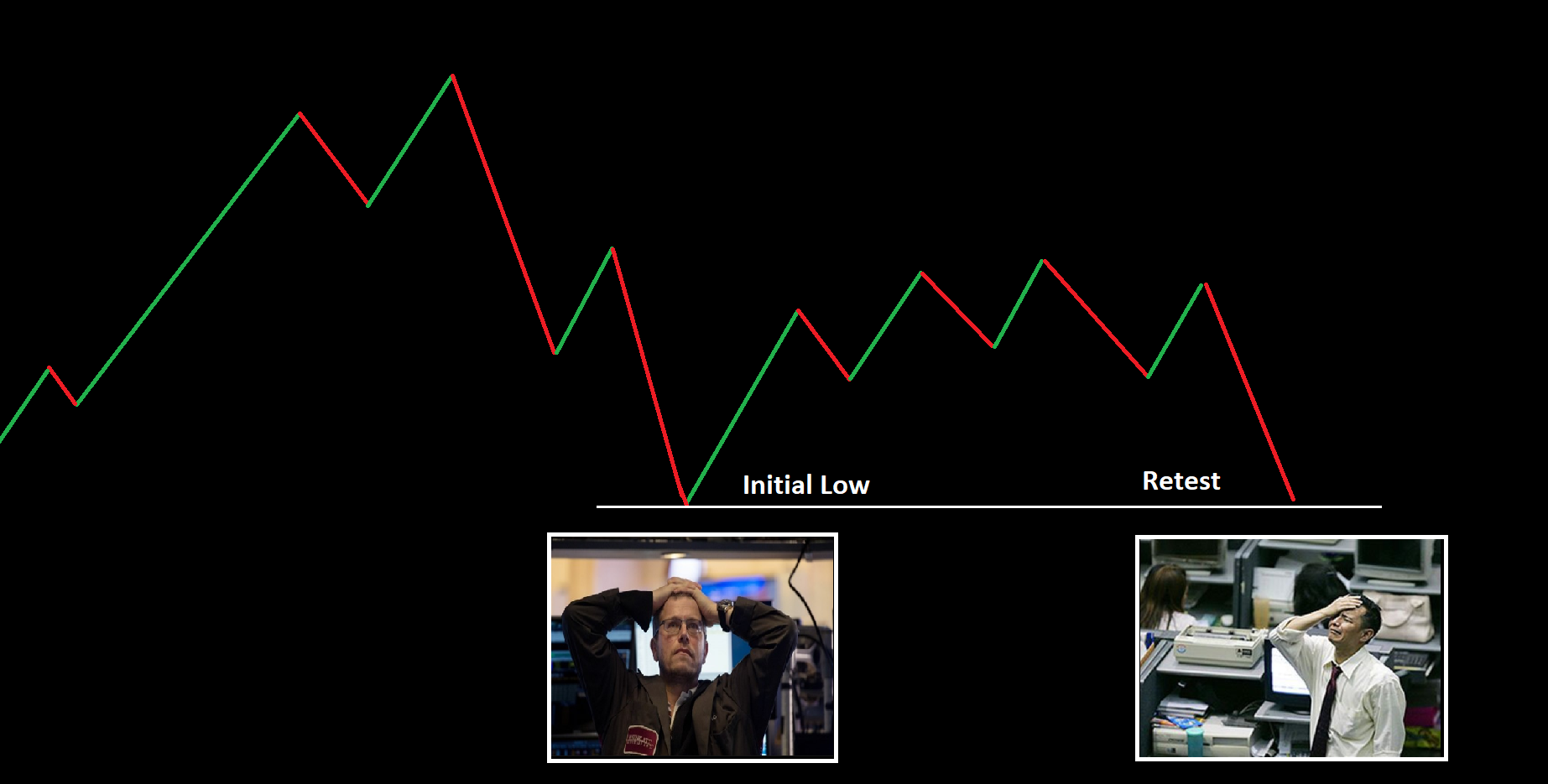 Nearly a month ago, I began closely examining the Oil Exploration & Production ETF and discussed that a breadth divergence was showing up. This divergence was suggesting dips to $24.00 would likely find strong support. The chart I shared showed that we had significantly fewer XOP constituents making new lows, even with the sector within a stone's throw of re-testing its December lows. Among the XOP, we had 57 new 52-week lows on December 24th when the index made its initial low, and in early July, we only had 19 stocks making new lows despite the index at roughly the same level. This comparison was not perfect, as technically, the index had not come within 1.5% of re-testing its low and was about 4% above it. However, last week, the index did come within 1.5% of re-testing its low and the breadth divergence that was in place held up. The updated chart is below the initial chart. 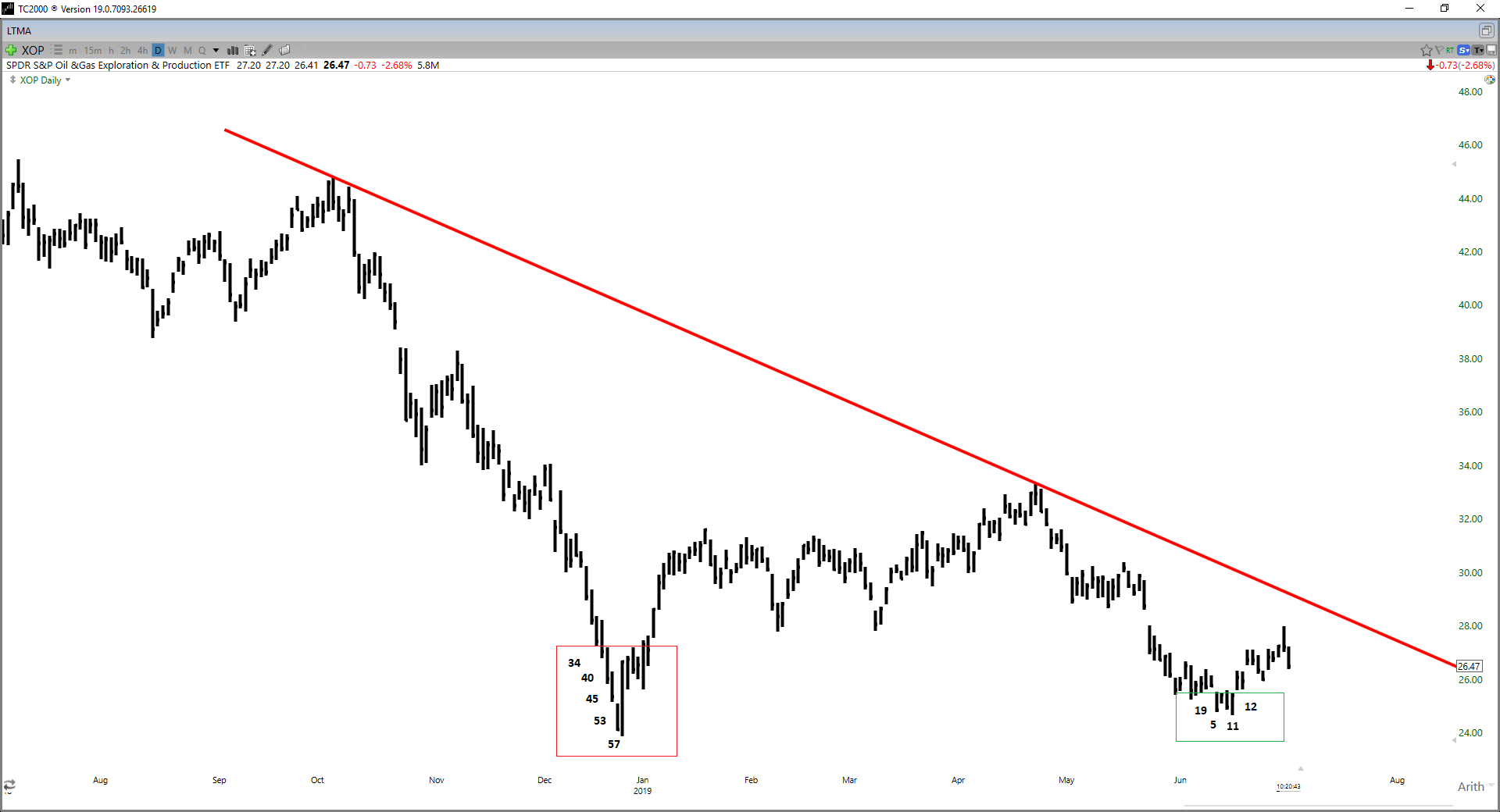 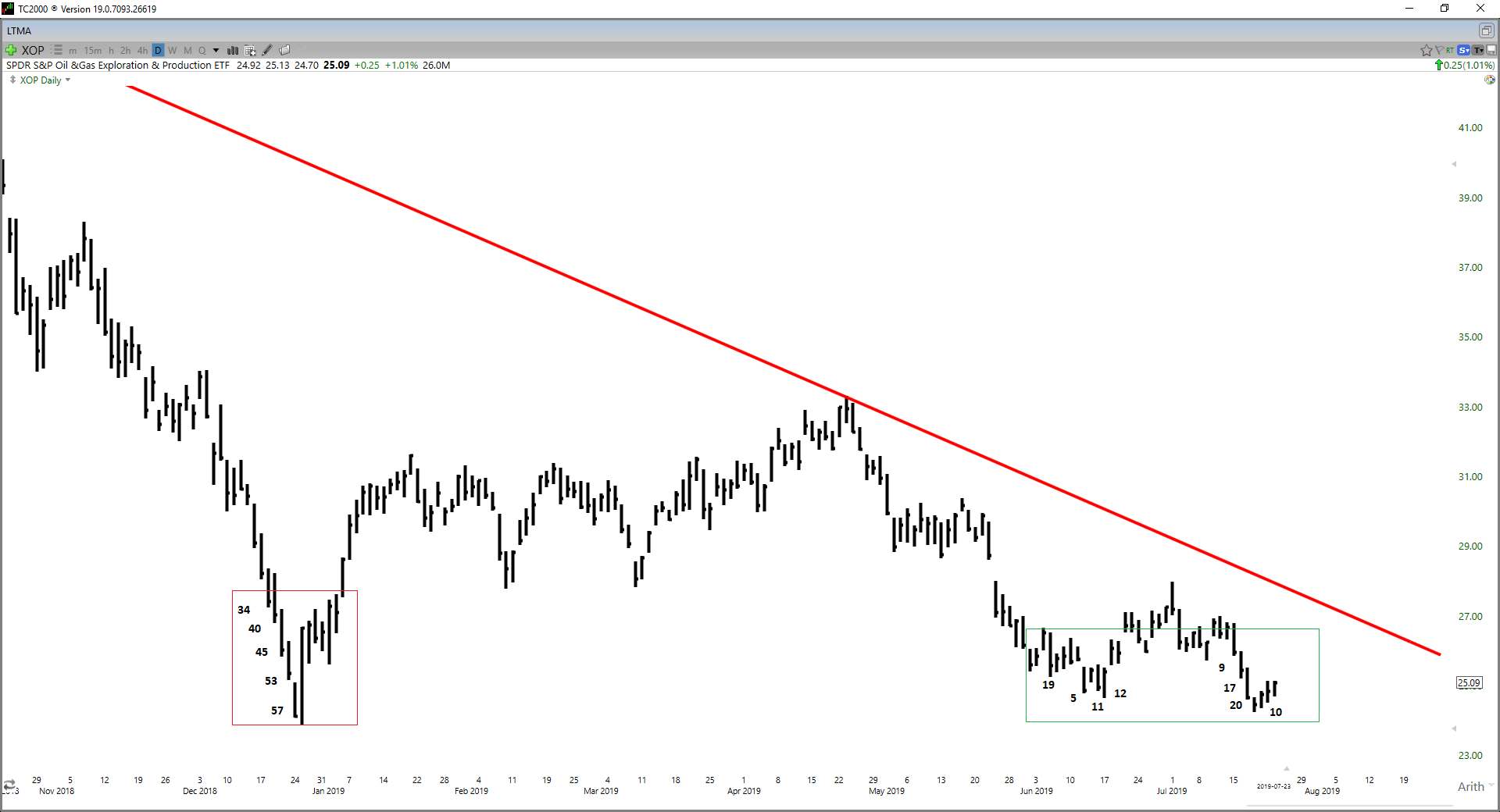 As we can see from the updated chart, we got 19 new lows among XOP constituents on the initial retest of the $25.00 level, and 20 new lows on the most recent test of the $24.25 level. The fact that we had roughly one-third the number of lows despite the index being at nearly the same level is telling us something. This is suggesting that the index is much stronger under the hood than it was in December and more XOP constituents are resisting the decline. Rather than a throw the baby out with the bathwater mentality in December, we are now seeing funds support the better oil names, while the laggards in the sector like Range Resources (RRC), Antero Resources (AR) deservedly make new lows.

To get a better view of the divergence I am discussing, I have built the below chart of new 52-week lows among the XOP constituents. We can see there is a prominent downtrend in new 52-week lows since December, even though XOP is sitting at roughly the same price level. If we were seeing just as many 52-week lows as December, or worse, even more 52-week lows, this would be a time to be very cautious. It would suggest that the funds wanted absolutely nothing to do with the sector, and they were not stepping in to support the better names. This is not the case though, with less than one-third of the sector making new 52-week lows, the better names are being supported, and the worst names are the ones giving the sector a bad name. 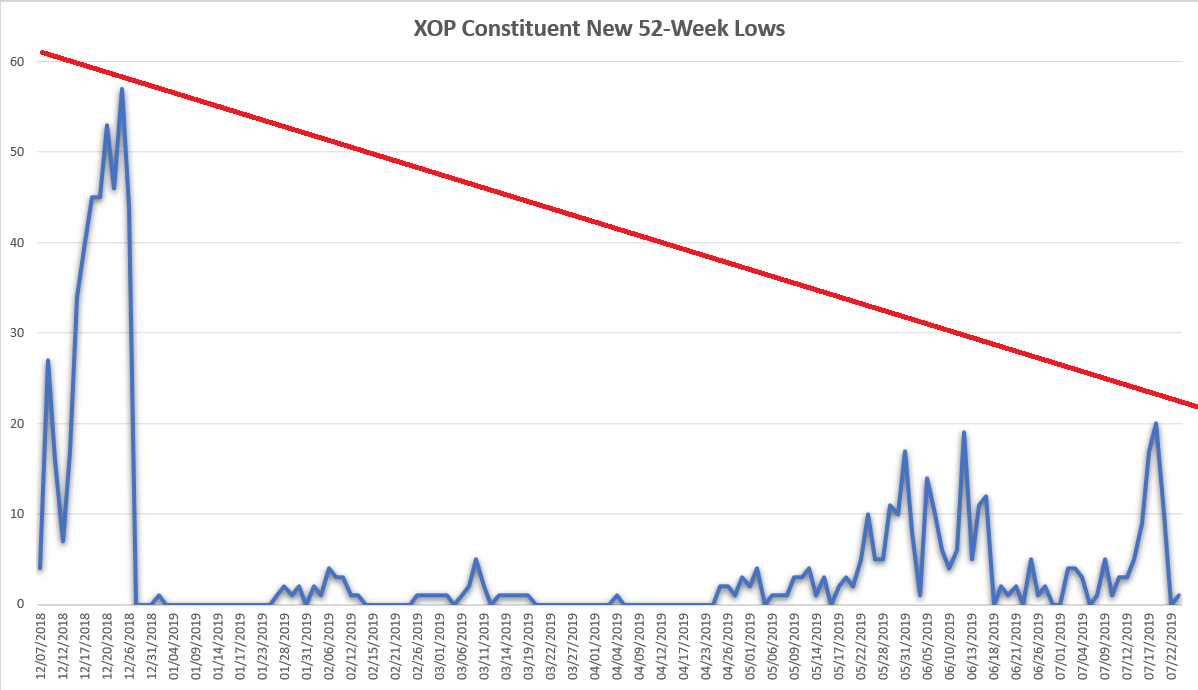 If we examine breadth from another standpoint, we can see that the amount of XOP constituents in up-trends is also significantly higher than in December. The most objective indicator I use to determine if a stock is in an uptrend is the 200-day moving average, and the below chart shows us that while 1.5% of XOP names were above the 200-day moving average in December, we currently have nearly 17% of the index above this crucial level on the recent retest. This is also telling us that the stocks are stronger as we needed a magnifying glass to find an oil stock in an uptrend in December, but presently, there's quite a few out there that have shrugged off the ETF's weakness. 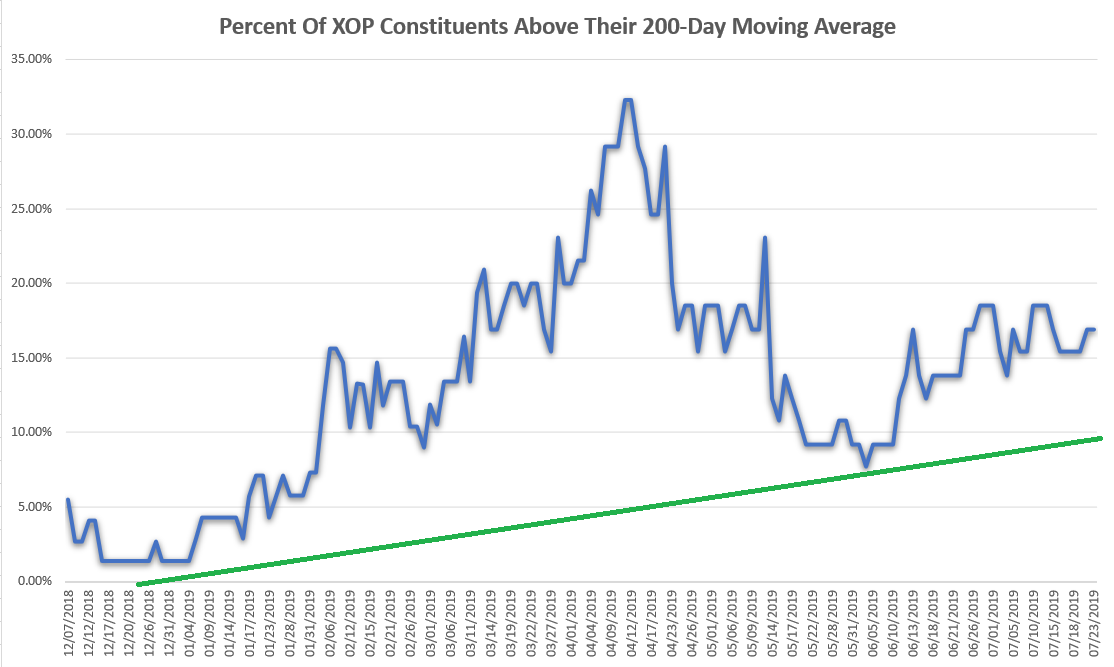 Finally, from a price standpoint, a proprietary momentum indicator I use is also showing a significant positive divergence. The indicator shown along the bottom of the chart has made two higher lows as well as a higher high, even while the Oil Exploration & Production ETF has virtually gone nowhere the past seven months. Once again, this suggests that the index is healthier under the hood than it was previously. 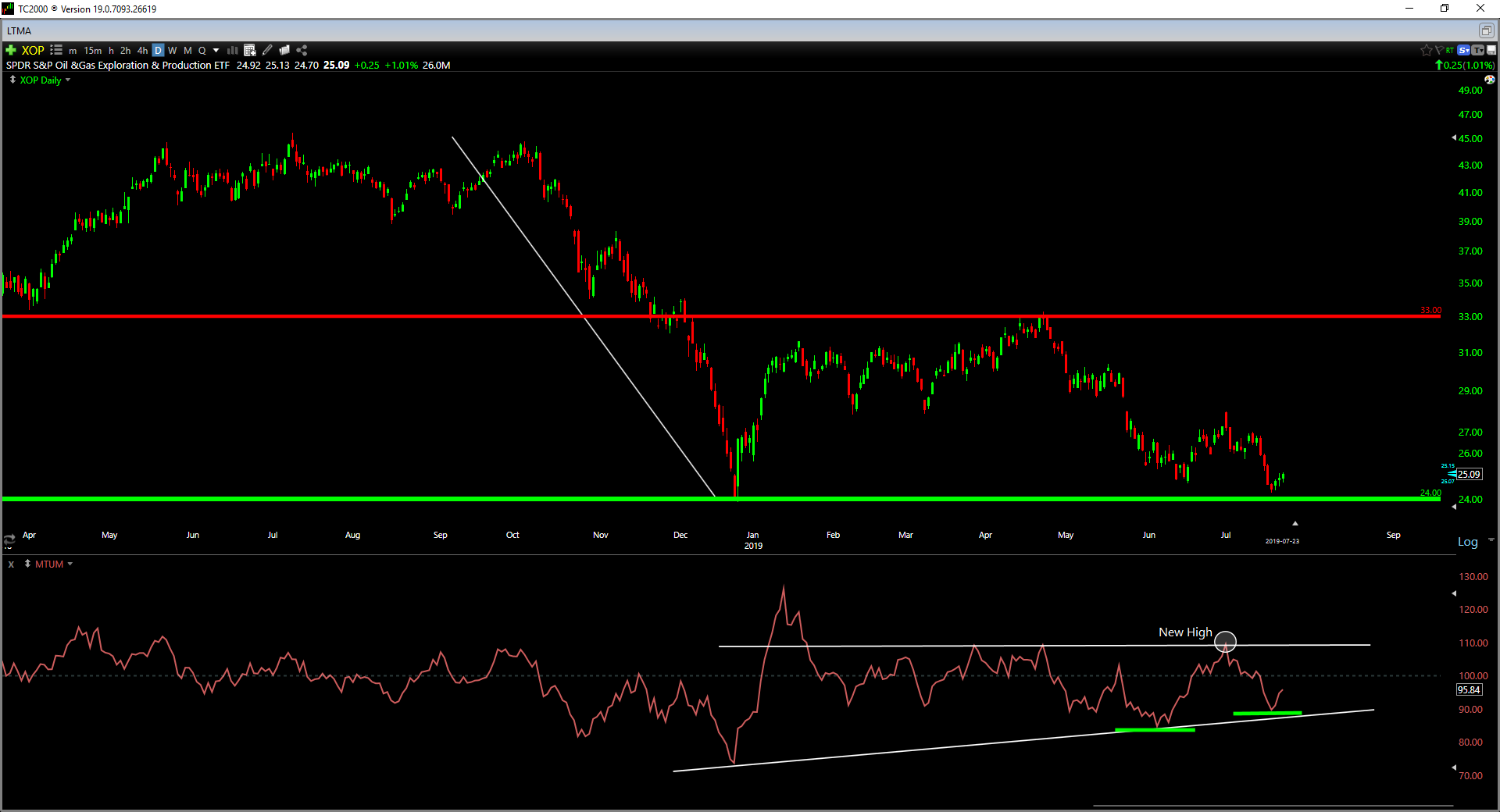 None of the above positive divergences I've presented guarantee anything and this divergence could completely implode as of next week for all I know. Having said that, the odds suggest otherwise, and for now, this divergence is something worth keeping an eye on. For the Oil Exploration & Production ETF to make it onto my potential long ideas list, I would need a weekly close at a minimum above the $30.00 level which is where the 40-week moving average (blue line) lies. However, I am playing this divergence with CVR Energy (CVI) currently, and remain long from $45.00 per share. 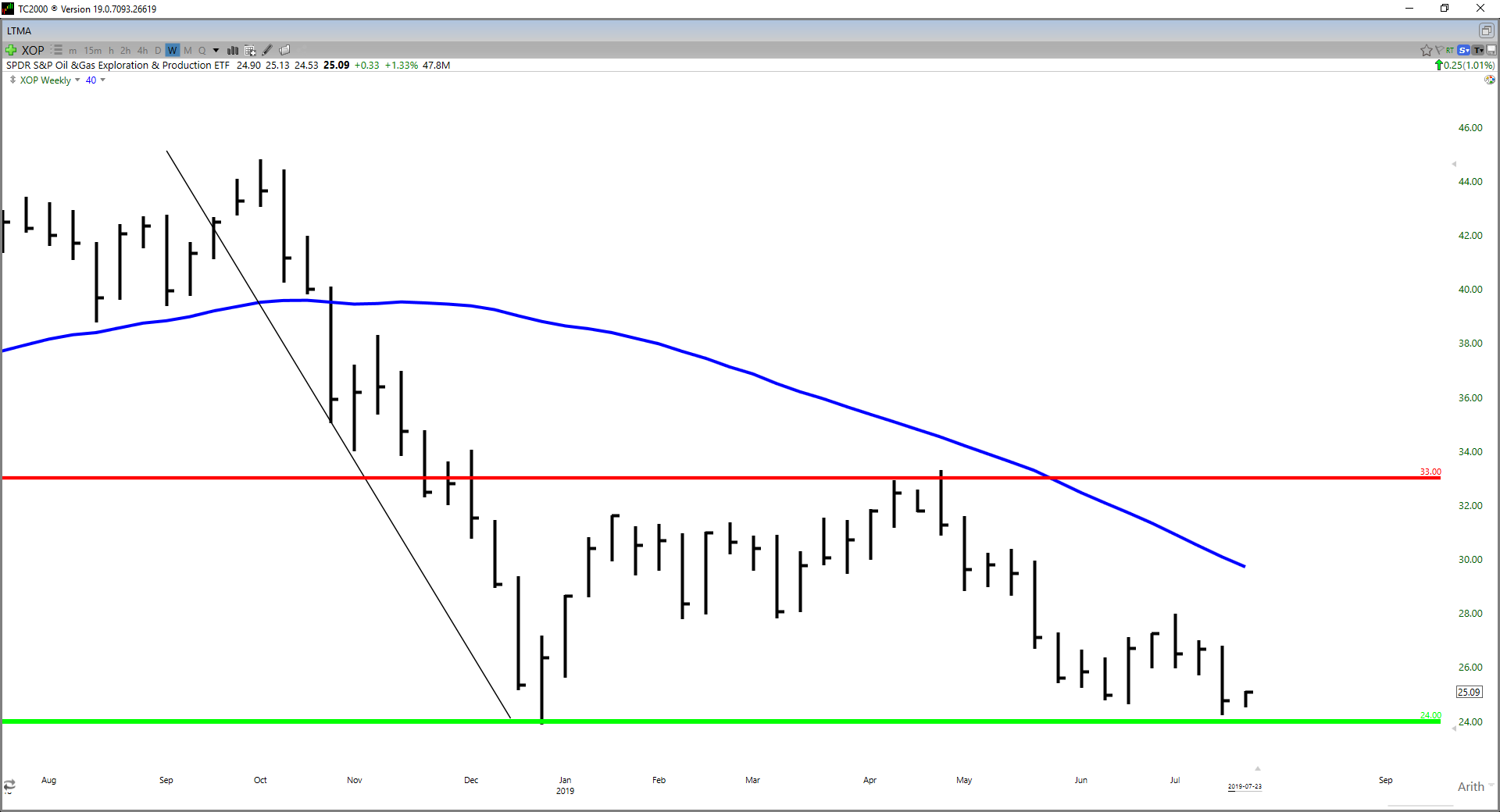 As long as the bulls can defend the $24.00 level on XOP on a weekly close, I am optimistic that the lows could be in here. A breakdown below the $24.00 level that isn't accompanied by a deterioration in breadth would also be fine as it would capitulate more weak handed longs. While I would consider XOP a medium-risk, high-reward long entry at current prices, I am much more attracted to the tier #1 names in the group like CVR Energy (CVI), and World Fuel Services (INT). I would consider adding to my position in CVR Energy on a dip and may initiate a new position in World Fuel Services next month after seeing how the stock digests earnings.

The most hated and worst-performing S&P-500 (SPY) sector has done nothing all year, but there is a reason to believe that the worst is likely over. I would not be surprised to see the index play catch-up on a year-to-date return basis to other sectors in the back half of the year, but this is contingent on the $24.00 level holding.