Disk-drive demand continues to be warped by the END_OF_DOCUMENT_TOKEN_TO_BE_REPLACED

Netflix Stock Turns Negative For 2019, But Trader Sees Another Big Drop Ahead

The stock tumbled into negative territory for the year in recent days as increasing streaming competition from the likes of Disney, Apple and Comcast spooked investors. By Tuesday’s close, it was down 5% in 2019. At its May peak, it was up 46%.

“It isn’t reacting to the oversold conditions, and that’s an issue for it. It has downside momentum, no doubt about it. We’ve seen it accelerate just in the last week or so,” Fairlead Strategies founder Katie Stockton said Tuesday on CNBC’s “Trading Nation.”

Netflix has fallen 15% in the past week. It is also the worst performer of the FANG trade – Facebook, Amazon, Netflix and Google parent Alphabet.

It could get worse before it gets better, according to Stockton.

“There’s no support on the chart until that December last year low right around $231, so I think Netflix still has some downside risk. However, we would expect some kind of relief rally from that support level, and that’s where oversold conditions are more likely to matter,” said Stockton.

Netflix would have to fall another 9% to reach $231. It last touched that level in December and has not traded well below it since January 2018. 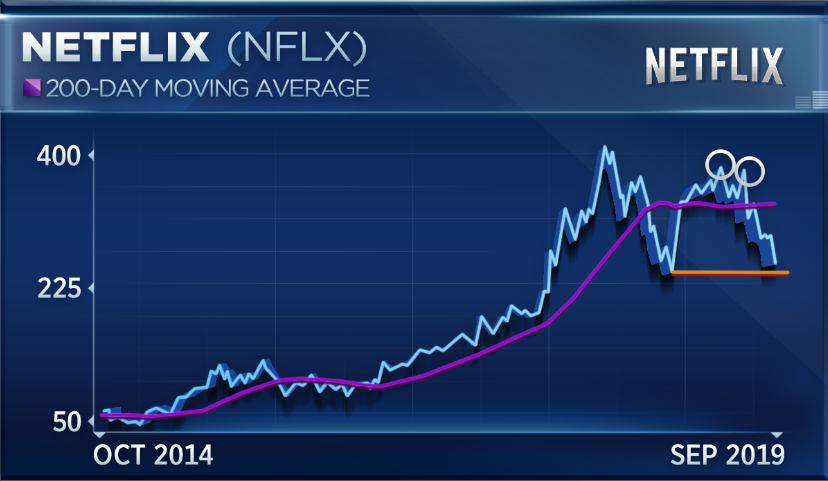 Michael Bapis, managing director at Vios Advisors at Rockefeller Capital, agrees it may get worse.

“We think this is just the beginning,” Bapis said in the same interview. “They have two major issues, subscriptions being one of them. For the first time in almost a decade, their subscriptions fell. That used to be a proxy for future profits. It’s not anymore.”

Netflix reported a decline in U.S. paid subscribers in its most recent quarter for the first time in eight years. The streaming service also fell short of its own guidance for global subscribers to increase by 2.3 million.

“The second problem is the content competition has heated up,” said Bapis. “Earnings matter more than ever, especially for this company going up against companies with strong balance sheets and strong earnings. I would stay away for the near future.”