We closely follow high short interest stocks because the group often times presents good trading opportunities and contrarian investment ideas with potentially significant mispricing opportunities. There are many ways to analyze short interest data, in some ways it's a backwards looking indicator as the stocks with the weakest operating and financial conditions already attract short sellers who often times exaggerate the declines. The data can also be forward-looking if the trend in short interest for a particular stock is diverging from the price action which could indicate an inflection point. Generally, high short interest indicates some underlying weakness or at least valuation concerns that bears are attacking. The following points are some of the angles to look at short interest data and how investors interpret the results.

Short Squeeze Potential: A large short interest in a stock going into an earnings release could indicate the possibility of a major short squeeze should the results come out better than expected, forcing the shorts to cover. The perfect setup is a beaten down stock trading near long time lows and earnings that not only beat expectations but include positive guidance by management that may even invalidate any prior short thesis.

Market Timing: A stock that has declined significantly over some time frame while the data shows short interest declining, could indicate a near-term bottom as bears appear to have pared back speculative short bets. With the same reasoning, stocks that have climbed significantly and show a trend higher in short interest may indicate growing skepticism of such rally that could lead to higher volatility and going forward.

Bullish Opportunities: For contrarian type of investors there could be some gems in the group from companies that have been beaten down but are trading below intrinsic value. The limiting factor in short selling of course is that a stock can only go down to zero, essentially a gain of 99.99% as max potential profit on a short sale . On the other hand, stocks can climb more than 100% and often do in a relatively short periods of time for a variety of factors. In this case, if there is confidence in the long-term potential for any particular stock a long position against the short sellers may be appropriate.

Bearish Opportunities: In some cases, the bears are simply right and stocks with high short interest will have much more downside as the fundamentals deteriorate. The holy grail of short Selling is finding a stock that will eventually fall to zero and these types of situations do happen. Across the universe of stocks down to micro-caps, there are always some that have dropped by catastrophic amounts over some time frame.

Industry Themes: The group is also interesting to monitor because it can provide clues into broader themes in the market including sectors and industries that are undergoing major structural challenges. That's the case with a number of retail and apparel type companies that are down significantly this year and the individual stocks with high short interest. Without a clear signal that the operating environment has improved, sentiment remains and the short interest grows.

Considering only stocks with a market cap above $250 million, the list below presents the top 50 stocks by short interest as a percentage of shares outstanding reported short. short interest is typically reported on a bi-weekly basis by the brokerage firms to the exchanges as the total number of shares short. 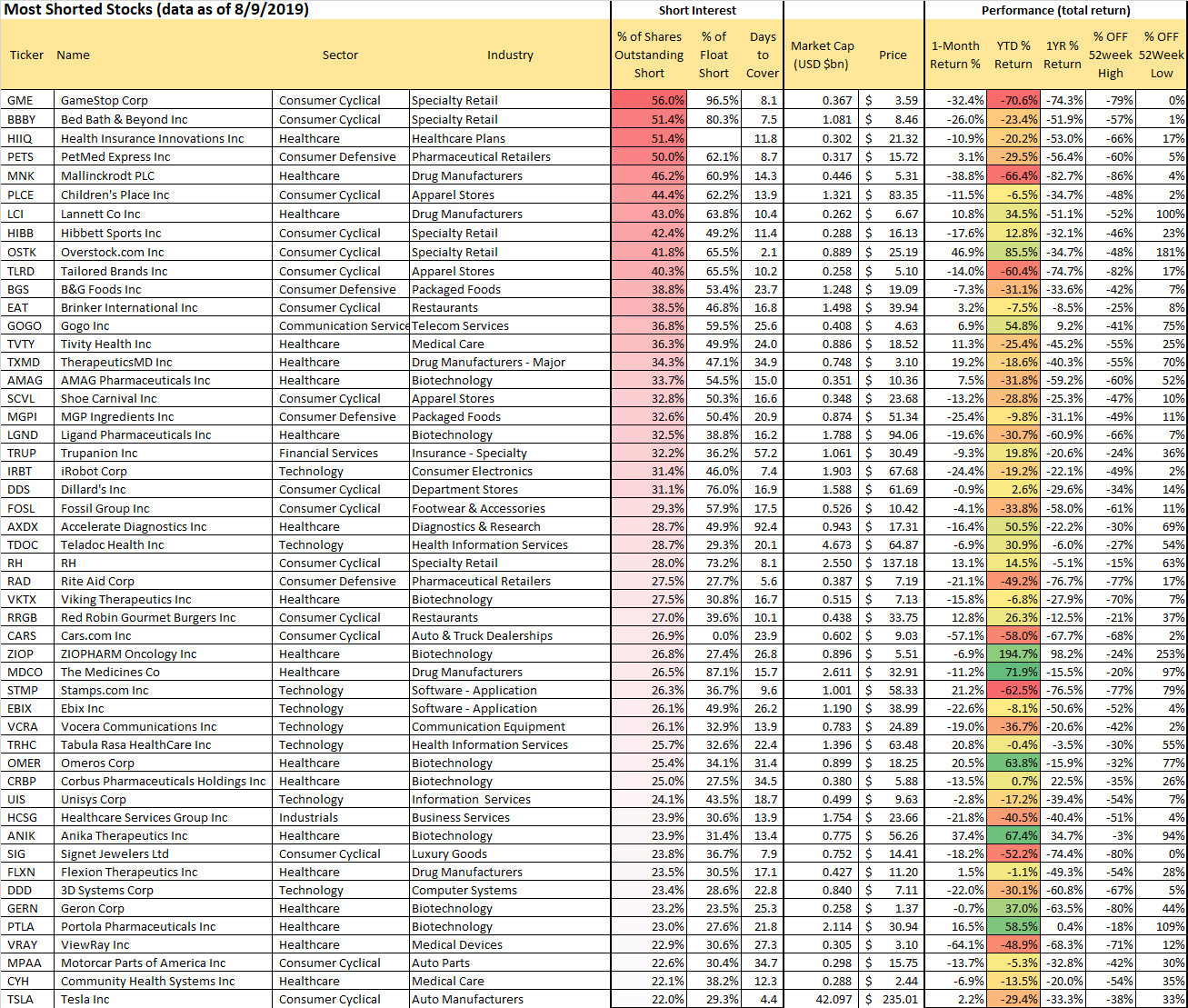 There are some exceptions to the overall bearish tilt including Overstock.com Inc (OSTK), which despite having a significant 42% of outstanding shares reported short, the stock climbed 47% over the past month and is up 86% year to date. The company which has a history as an online retailer, has largely refocused on blockchain technologies benefiting now from the ongoing strength in cryptocurrencies. In June the company went live with its 'TZero' digital wallet and trading app. The company has become somewhat of a pioneer in the space of security tokens although the segment's commercialization prospects are far from certain. The stock is still down nearly 50% from its 52-week but the current momentum is hard to ignore. It appears some bears are giving up as the short position has declined in recent weeks. We think crypto based momentum can push this higher in the near term which will be supported by further short covering. A very speculative stock any way you look at it. 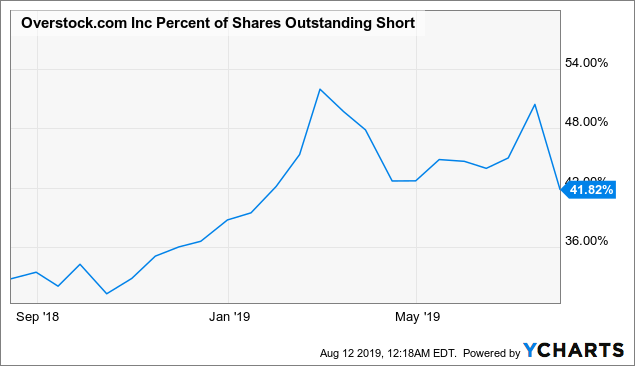 GameStop Corp (GME) takes the number one spot as the most shorted stock based on 56% of its shares outstanding reported short. The stock is down 70% in 2019 as the company's existence faces the existential threat of declining physical disk game sales with console makers moving content to digital downloads. The company reported weaker than expected earnings with sales declining 13% year over year.

Cars.com Inc (CARS) is one of the biggest losers on the list, down a massive 57% over the past month. The company which sells online classifieds and advertising for automobiles has struggled with a combination of weak industry trends while losing market share to larger rival CarGurus Inc (CARG). The company had hoped to sell itself during a strategic review but was unable to find a buyer. Guidance for the year ahead was also cut. We were previously bearish on the stock but for what it worth; the stock now looks interesting here at $9.00 for a least a bounce.

iRobot Corp (IRBT) with a short interest at 31.4% is another disaster story with shares down 24% in the past month. The leader in robotic vacuums blamed a poor Q2 result on the impact of tariffs from the U.S-China trade dispute and also lowered full year guidance. We also think there is some concern over emerging competition from smaller rivals offering similar products often times at a lower price point. In our view, the stock is a hold at this point given the nearly 50% decline from its all-time high.

Tesla Inc (TSLA) makes the list with a short interest at 22% of shares outstanding. In fact the company has a reported 39.5 million shares short which based on a share price of $235 is actually the largest short in the market in terms of notional value at approximately $9.3 billion. Indeed, the company with a market cap of $42 billion is the biggest among group which is dominated by small cap stocks. TSLA reported Q2 earnings in July missing consensus EPS and revenues adding to volatility in the stock that had climbed nearly 50% from a low of $176 in early June to a high of $165 before selling on the report. Demand and cash flow concerns continue to weigh on sentiment. The stock is still down 38% from its 52-week high. 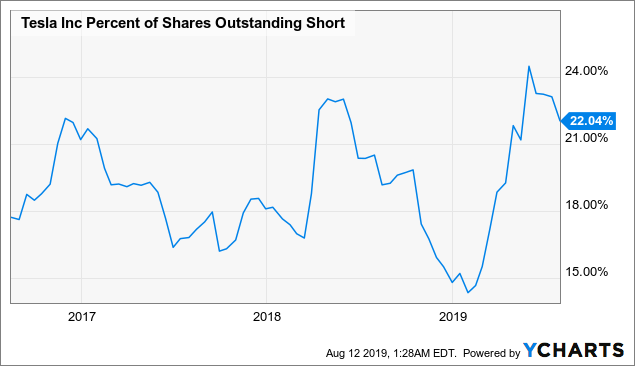 If you're looking for Beyond Meat Inc (BYND), it doesn't make the list as the its short interest of 5,858,245 represents about 10% of shares outstanding. In term's of short as a percentage of the float, BYND at 51% is significant, but we note 14 stocks on the list above with a higher number. A stock's float is often difficult to track across the market given regular insider transactions so the percentage of shares short outstanding is often seen as a more comparable number.

During periods of market volatility as has been observed in recent weeks since the FED rate cut and escalation of the U.S.-China trade dispute, expect heavily shorted stocks to face more downside as they become easy targets. With that said, there are probably more than a few turnaround candidates that will ultimately end up proving the bears wrong.

We hope the list serves as a good starting point for further research and due diligence. The first step is to understand why each of these stocks are attracting bearish sentiment. Let us know in the comments which stocks are good long or short candidates.