Market volatility is up in recent sessions, and END_OF_DOCUMENT_TOKEN_TO_BE_REPLACED

As tech takes a tumble this week, there END_OF_DOCUMENT_TOKEN_TO_BE_REPLACED

More Trouble Ahead For Investors?

As I discussed last week, my advance/decline analysis warned of a further decline and more pain for investors. As is often the case this analysis was correct as the Dow Transportation Average ($TRAN) led the averages lower losing 3.94% for the week.

The selling accelerated on Friday in reaction to another misguided move to use tariffs as a weapon that is finally catching the attention of the Republicans and the US Chamber of Commerce.

There are few legitimate economists who believe this will hurt Mexico more than the U.S. consumer or that it will be good for the U.S. economy. In fact, a survey of economists found that the tariffs would were most likely to impact lower income groups. Also late Sunday it was announced that one of the Administrations true economists Kevin Hassett was leaving the White House. 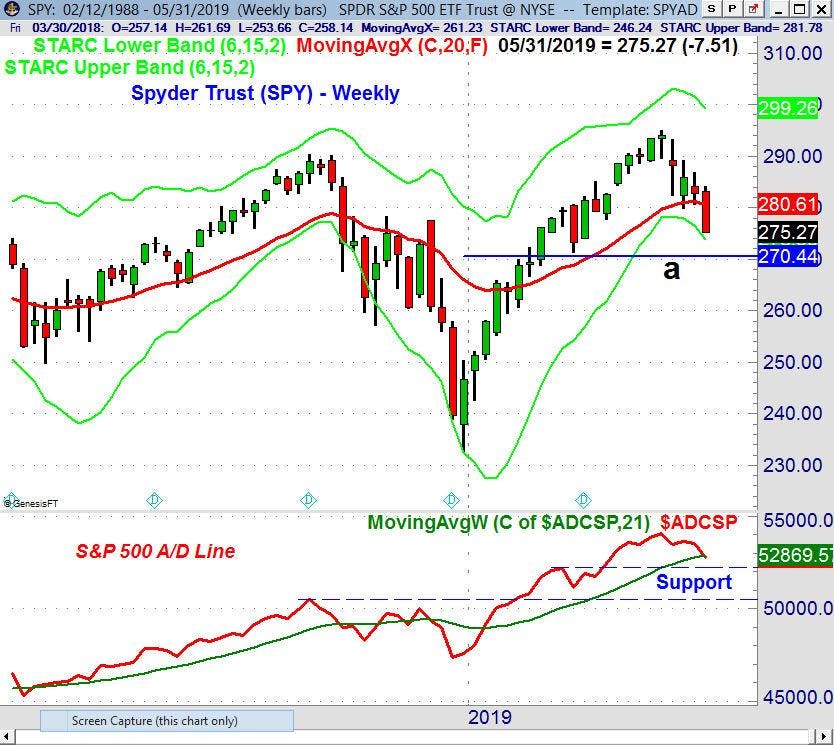 As for the overall market, the weak technical outlook has gotten even more negative with the declines last week. The Spyder Trust (SPY) had a low last week of $275.24 which was below the weekly starc- band at $276.55.  It now stands at $273.88 with the QPivot at $270.44. If the S&P 500 violates the 2700 level the bearish sentiment is likely to increase significantly.

The weekly S&P 500 Advance/Decline line has dropped below its rising WMA for the first time since January 11th. It has next support at the March high with much stronger at the September 2018 high.  The A/D line did make a new all-time high with prices five weeks ago and therefore did not form any divergences.  This suggests the current decline should present a good buying opportunity. 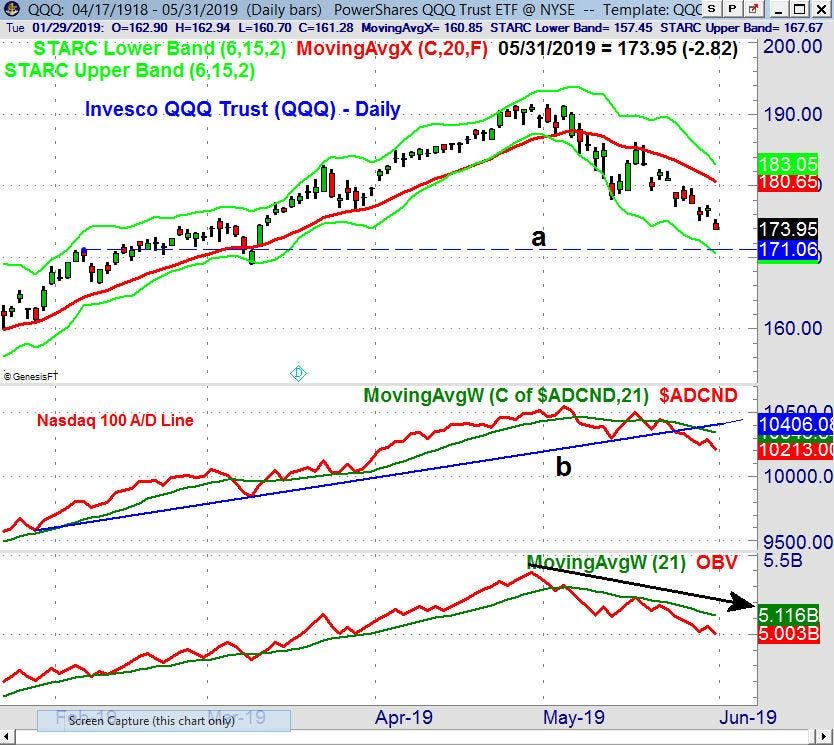 The Invesco QQQ Trust (QQQ) was down 8.2% for the month as it gave up another 2.4% in just four days last week. The next good support is in the $171 area. QQQ is getting oversold as it is well below the declining 20 day EMA at $180.65. The QQQ has opened weak several times recently which is a worrisome sign.

The Nasdaq 100 A/D line first dropped below its WMA in early May and has since formed a series of lower highs. The violation of support at line b, over a week ago, warned of heavier selling. The A/D line is now further below its WMA and several other short term A-D indicators I follow are also getting oversold.

The other daily advance/decline lines are all negative and show no signs yet of a bottom.  This analysis does however favor a good rebound in the next week or so as the QQQ is currently 4.5% below its declining 20 day EMA at $181.84. Therefore, even a sharp rally will not by itself change the negative short term trend.

A number of The Viper favorite sectors are getting close to more important support where they are likely to bottom. Others like the Material Sector Select (XLB) that was down 8.2% in May and still looks weak.

The economic data last week was quite good Consumer Confidence was strong.  This week we have the ISM Manufacturing Index on Monday with the monthly jobs report on Friday. It is doubtful that any of the data will interrupt the sharp slide in short term interest rates that plunged last week.

Those of my readers who followed the four-week dollar-cost averaging plan I recommended before Christmas are still 75% long at an average value of 2497 based on the S&P 500. On February 25, 2019, my order to sell 25% of the position was executed when the S&P 500 moved above 2805. As a stop on the position, I would sell the remaining position if the S&P 500 has a weekly close below 2712, which is the current Quarterly Pivot.