Market volatility is up in recent sessions, and END_OF_DOCUMENT_TOKEN_TO_BE_REPLACED

As tech takes a tumble this week, there END_OF_DOCUMENT_TOKEN_TO_BE_REPLACED

Major Gold Bull Markets Are Rare, But Some Investors Are Betting One Is Here

Gold has been on fire this year, and some investors think the precious metal is poised to do something it has only done twice since World War II: enter a major bull market.

In its strictest sense, a bull market is considered to be a gain of more than 20% from the most recent low. But pops like the one that just occurred aren’t considered a genuine bull market by most investors but rather just a cyclical upswing. Instead they would like to see a rally that lasts for years and involves bigger gains.

Gold could build on these recent gains as the Federal Reserve gets set to lower rates, U.S. economic activity slows and trade tensions remain. Historically, gold has rallied when the Fed cuts because such moves depress bond yields and the U.S. dollar. Gold is also used by investors as a safe haven to trade amid geopolitical tensions.

“If our judgment is correct and the U.S. economy is softening and inflation will fall moving forward and yields are going to stay low for an extended period of time, then that’s bullish for gold,” said Chen Zhao, chief global strategist at Alpine Macro. 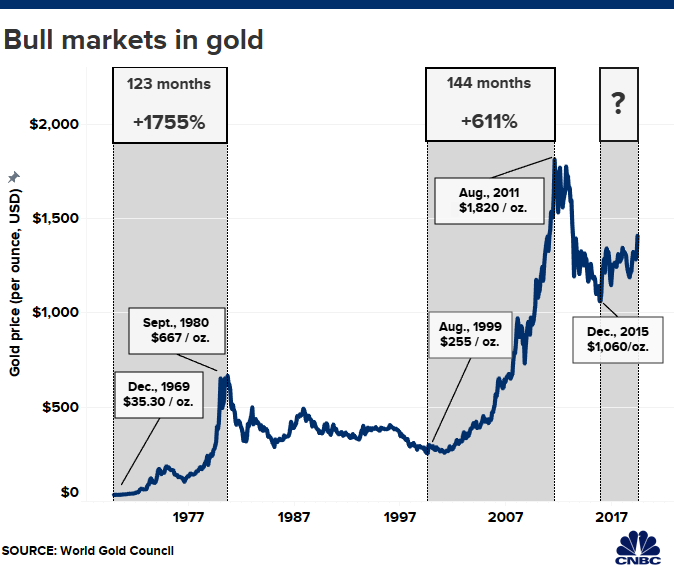 A rate cut would come at a time when policymakers and investors are worried about the U.S. economy. Fed Chairman Jerome Powell said on July 10 that business investments have slowed across the U.S. recently as “crosscurrents ” from the ongoing U.S.-China trade war and slower economic growth overseas dampen the outlook on the U.S. economy. At the same time, inflation remains stubbornly below the Fed’s 2% target.

China and the U.S. have been engaged in a trade war for more than a year, exchanging tariffs on billions of dollars worth of their goods in that time. The two countries agreed to restart trade talks late last month. But President Donald Trump said Tuesday the two sides still had a long way to go before they reached a deal.

This environment of easier monetary policy hits the sweet spot for gold.

“Gold is often thought of as an inflation hedge, yet the two have not been correlated over the past 20 years,” Phillip Colmar, founding partner at MRB Partners, said in a note earlier this month. “Instead, gold thrives and core consumer price inflation tends to rise in an environment where policymakers are deliberately and persistently keeping policy rates and bond yields anchored below nominal GDP growth (i.e. fueling growth and inflation with an easy policy), which was the case of the 1960s and 1970s.”

Colmar added he would not “chase” gold at current levels, saying “conditions are overbought.” However, “we view the recent rise in gold prices as a market-based signal that central banks are providing more reflation (via lower interest rates and bond yields) than is currently necessary to support the global economy.”

The last major bull market in gold lasted from the late 1990s until 2011. The one before that ran between the late 1960s and 1980. Gold benefited from the Fed lowering interest rates during both of those periods, as the central bank’s measures helped spur inflation in the U.S.

To be sure, stocks have also gotten a boost from easier monetary policy. In fact, historically low interest rates have been one of the biggest catalysts for stocks during their current bull market, which is the longest on record. These measures allow companies to borrow money at a cheaper rate so they can grow their businesses or buy back stock.

But Ray Dalio, founder of the world’s largest hedge fund, Bridgewater Associates, thinks it might be time to favor the yellow metal over stocks, saying central banks are about to spark a “paradigm shift” in investing with this round of monetary easing.

Dalio said in a LinkedIn post that assets like stocks “are unlikely to be good real returning investments and that those that will most likely do best will be those that do well when the value of money is being depreciated and domestic and international conflicts are significant, such as gold.”

“Additionally, … most investors are underweighted in such assets, meaning that if they just wanted to have a better balanced portfolio to reduce risk, they would have more of this sort of asset. For this reason, I believe that it would be both risk-reducing and return-enhancing to consider adding gold to one’s portfolio, ” he added.