JPMorgan Says It’s Time to Buy the Dip in Stocks

Equity investors are racing for the door after the latest escalation in U.S.-China trade tensions, but JPMorgan Chase & Co. strategists say this is an opportunity to buy more stocks.

“We do have sympathy with some of the tactical market concerns,” said strategists led by Mislav Matejka. “Our core view remains that one should use the prospective weakness as an opportunity to add further, similar to the May experience. We continue to believe that global equities will advance further before the next U.S. recession strikes. We think that the growth-policy trade-off is far better now than it was in 2018.” 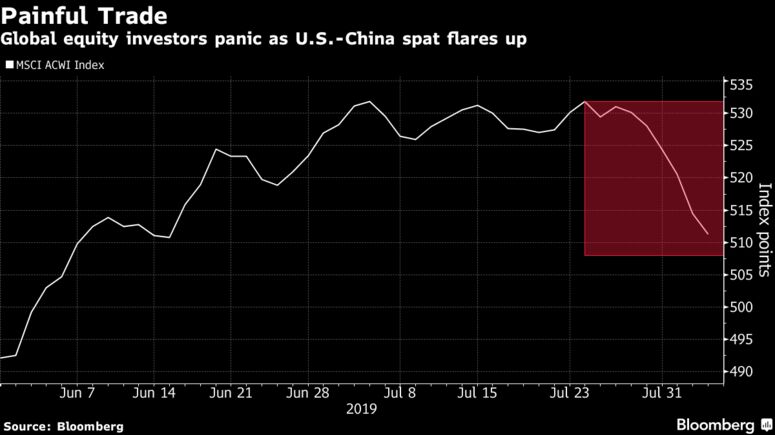 Global equities erased almost $1 trillion in value Friday and continued their slump Monday after the White House announced a 10% tariff on a further $300 billion in Chinese goods and China struck back by letting the yuan tumble and asking state-owned companies to suspend imports of U.S. agricultural products.

Despite these negative headlines, JPMorgan strategists recommend focusing on the supportive macroeconomic environment instead. The U.S. Federal Reserve is easing policy and it’s “premature” to expect a recession in the near future due to strong economic data, while equity valuations don’t look “demanding” as investors remain defensive in their positioning, according to JPMorgan.

As for allocations by country, the strategists recommend staying overweight U.S. stocks and neutral the euro zone because of stronger earnings growth among American companies.

The Stoxx Europe 600 Index tumbled 2% today with miners and tech leading the declines. U.S. stock futures were down 1.3%.