Last week, the Fed cut interest rates for the second time in the last 60 days. In a study determining the best stocks to own after back-to-back rate cuts, Dow stock Johnson & Johnson (JNJ) stood out as an intriguing option going forward.

More specifically, Schaeffer's Senior Quantitative Analyst Rocky White looked at individual SPX stocks after the last 10 back-to-back rate cuts. According to White, JNJ averaged a monthly gain of 4.1%, and was higher 80% of the time after two Fed rate cuts in the last 60 days. For context, that's good for second-best among Dow stocks, and third-best among its pharmaceutical sector peers.

At last check, JNJ was trading at $132.51, so a move higher of similar magnitude would put the stock just below $148. The last time Johnson & Johnson stock traded that high was prior to a mid-July bear gap. Since that drop, support has emerged at the $126 level, an area that also caught pullbacks earlier in 2019. A 4.1% pop in the next month would also push the equity close toward its year-over-year breakeven point. 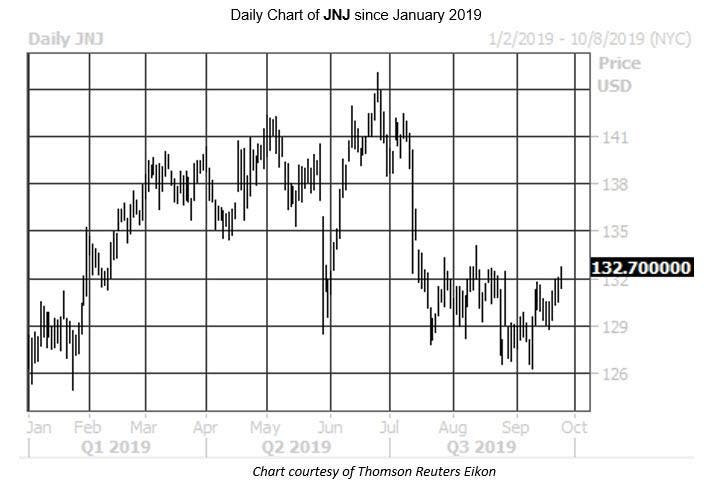 The analyst community remains on the fence, and could be swayed by significant price action either way. There are 12 brokerages covering JNJ, and six rate it a tepid "hold," with the other six maintaining "buy" or better ratings. In other words, the door is open for upgrades on the Dow stock.

In the meantime, short-term volatility expectations remain modest. The security's Schaeffer's Volatility Index (SVI) of 18% arrives in the tame 24th percentile of its annual range, indicating that front-month options have been cheaper, from an implied volatility standpoint, only 24% of the time in the last year.