Shares of GoPro (NASDAQ:GPRO) never panned out the way early investors had hoped. In fact, some investors were really burned by GoPro stock after the action-camera maker went public.

With GoPro stock now just under $6 per share, 93.7% below its all-time high of $93.85 , it’s safe to say that GPRO stock has turned off a lot of investors for good. Investors view its product as a commodity and something that’s subject to competition and cannibalization.

That’s true, but only to an extent. Critics used to say, “You can just tape an iPhone to your helmet.” That was (and still is) a stupid idea. But just because GoPro has a happy and loyal customer base doesn’t mean  that GPRO stock is a good investment. The stock price says as much.

After looking at the charts, however, I think that GoPro stock could advance.

We’ll get a quarterly update from GoPro when the company reports its earnings on May 9. For both revenue and earnings, GPRO’s fiscal first quarter is its weakest seasonal quarter. Not that that’s a secret to Wall Street, but it’s worth pointing out. Particularly as analysts, on average, still expect GoPro’s revenue to grow 15.9% year-over-year. On the earnings front though, they are looking for a loss of 9 cents per share. That estimate has fallen from a loss of 3 cents per share just 90 days ago.

For the full year, analysts’ consensus estimate calls for revenue to grow 6.2% year-over-year to $1.22 billion. but its earnings are expected to soar 225% to 29 cents per share this year.

In the past, GPRO has failed to execute well. When it comes to GPRO stock, that creates both opportunity and risk. There’s the risk that poor execution will prevent GoPro from achieving the consensus outlook. However, GoPro stock provides  opportunity because if the company does come through , then GPRO could top these estimates. Since analysts, on average,  expect essentially flat growth in 2020, GoPro’s results could beat expectations.

The story really comes down to execution. GoPro stock  is certainly a speculative investment. But if management delivers, GPRO stock can climb, especially later in the year, when GPRO enters its busy season. 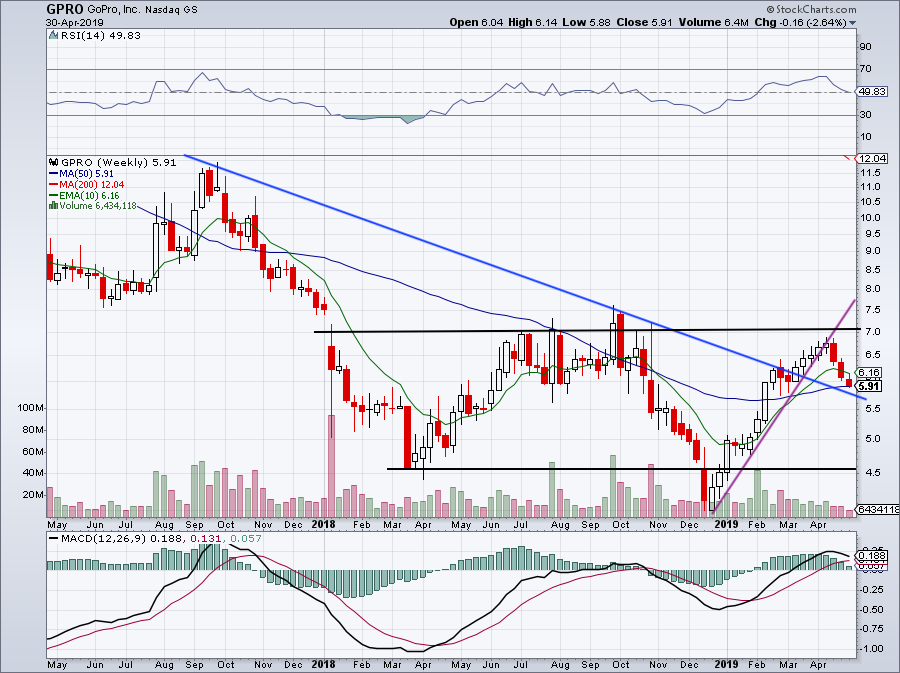 So where can GoPro stock go if and when it rallies? GPRO is sitting on an important area of support.

GoPro stock posted a solid breakout over long-term downtrend resistance (depicted by the blue line) last month. The stock nearly rallied to $7 on this move, but has since pulled back about $1 per share to $5.90. It’s currently below the 10-week moving average and is about 8% below its 50-week moving average.

What I need to see now is GoPro stock hold up over its prior downtrend resistance. Currently, that level is at about $5.70, but it’s declining over time. If GoPro stock falls below that level, it could head back to the $5 -$5.50 area.

Conversely, if GPRO holds up, GPRO stock could bounce. If it does, a run to $7 may be in the cards if GPRO moves above its March highs, so it’s not a layup. But if GoPro stock rises above its 10-week moving average, it will have some momentum at its back.

So GoPro stock may be looking at a potential run of nearly 20%. Let’s see how it pans out.